When Logic And Emotions Collide

Someone asked me awhile back why I haven’t been writing any more political articles. The simple truth is that I’m tired of arguing with people who choose to ignore the facts I present them, instead they rely upon their emotions to guide their thought process. You simply can’t win an argument when people refuse to accept facts. To put it bluntly, you can’t argue with fools. There, I’ve said it, those who refuse to see the facts for what they are, and utilize them to make informed decisions are fools. If you rely upon your emotions to guide your thought forming and decision making process, you are foolish and a borderline idiot, and it seems to me that there are more of this type people in this country than there are those who choose to use their brains for the purpose they were intended they be used, TO THINK.

I believe that most people have this gut feeling that something is wrong with our country but the problem is that there are so many differing opinions when it comes to which direction our country should that hardly anyone can come to an agreement with each other about the matter. Those who call themselves conservatives, or Republicans, believe that the Democrats are to blame for all our countries problems, while those who call themselves liberals, or Democrats, feel the same way about the Republicans. Hell, even within the parties themselves there are differences of opinions as to who has the best vision for the future of our country.

But if you ask me, neither ‘party’ has the answer for all that is wrong in this country. In a speech delivered to the American Newspaper Publishers Association at the Waldorf-Astoria Hotel, President John F. Kennedy stated that “Even today there is little value in ensuring the survival of our nation if our traditions do not survive with it.”

Can you honestly tell me that you believe that either of the two main political parties in this country give a damn about upholding the traditions of our nation’s Founders? If you honestly sincerely believe that they do then you may as well stop reading now because there is no hope for you.

Throughout our nation’s history the men we have chosen as president have warned us of the danger of political parties. In his farewell address President George Washington warned, “However [political parties] may now and then answer popular ends, they are likely in the course of time and things, to become potent engines, by which cunning, ambitious, and unprincipled men will be enabled to subvert the power of the people and to usurp for themselves the reins of government, destroying afterwards the very engines which have lifted them to unjust dominion.”

In a letter to Jonathan Jackson, John Adams wrote, “There is nothing which I dread so much as a division of the republic into two great parties, each arranged under its leader, and concerting measures in opposition to each other. This, in my humble apprehension, is to be dreaded as the greatest political evil under our Constitution.”

In a letter to Francis Hopkinson, Thomas Jefferson wrote, “I never submitted the whole system of my opinions to the creed of any party of men whatever, in religion, in philosophy, in politics, or in anything else, where I was capable of thinking for myself. Such an addiction is the last degradation of a free and moral agent. If I could not go to heaven but with a party, I would not go there at all.”

And it is not just our nation’s founders who felt this way. Even in the early 20th century President Theodore Roosevelt warned us about the influence and control the political parties had in this country, “The bosses of the Democratic party and the bosses of the Republican party alike have a closer grip than ever before on the party machines in the States and in the Nation. This crooked control of both the old parties by the beneficiaries of political and business privilege renders it hopeless to expect any far-reaching and fundamental service from either.” (The Outlook Vol. 101 July 27)

In his Progressive Covenant With the People speech Roosevelt further declared, “Political parties exist to secure responsible government and to execute the will of the people. From these great tasks both of the old parties have turned aside. Instead of instruments to promote the general welfare they have become the tools of corrupt interests, which use them impartially to serve their selfish purposes. Behind the ostensible government sits enthroned an invisible government owing no allegiance and acknowledging no responsibility to the people.” (August 1912)

But by all means, feel free to keep on drinking the Kool-Aid, foolishly believing that the political parties truly provide us with the best qualified candidates this nation has to offer to hold office at both the state and federal levels. If these people who currently hold office all across the land are ‘the best’ this country has to offer, then we are truly screwed. Yet people continually re-elect a good percentage of them over and over again, simply because they believe that their party is better than the other one.

I’m truly tired of hearing people say they are voting for the guy who sucks the least between a long list of candidates, none of which, in my honest opinion, is trustworthy enough to collect my garbage. Noah Webster, one of those unknown Founders, once said, “In selecting men for office, let principle be your guide. Regard not the particular sect or denomination of the candidate–look to his character.” Or, as our nation’s fifth president, John Quincy Adams once said, “Always vote for principle, though you may vote alone, and you may cherish the sweetest reflection that your vote is never lost.”

You tell me, how?

I simply cannot get people to understand that the Constitution is a LAW, that it was written to create, and grant certain specific powers to our government for the administration of the republic. Frenchman Frederic Bastiat once told us the purpose for which laws are created. In his treatise The Law Bastiat states, “We must remember that law is force, and that, consequently, the proper functions of the law cannot lawfully extend beyond the proper functions of force. When law and force keep a person within the bounds of justice, they impose nothing but a mere negation. They oblige him only to abstain from harming others. They violate neither his personality, his liberty nor his property. They safeguard all of these. They are defensive; they defend equally the rights of all. ”

In his Second Treatise on Civil Government, John Locke stated, “Wherever law ends, tyranny begins, if the law be transgressed to another’s harm; and whosoever in authority exceeds the power given him by the law, and makes use of the force he has under his command to compass that upon the subject which the law allows not, ceases in that to be a magistrate, and acting without authority may be opposed, as any other man who by force invades the right of another.”

Yet, for the most part, we do not oppose these unconstitutional laws, we do not resist. Instead we meekly obey like the timid little sheep that we are. Is that the nature of a free man, or is it the nature of a slave who has become accustomed to being deprived of all his unalienable rights?

As I previously stated, most people realize that there is something wrong in this country. The only problem is that they aren’t looking in the right place to find the problem. It is not those who sit in high office, as they are a mere reflection of the people who chose them. Samuel Adams once said, “No people will tamely surrender their Liberties, nor can any be easily subdued, when knowledge is diffused and Virtue is preserved. On the Contrary, when People are universally ignorant, and debauched in their Manners, they will sink under their own weight without the Aid of foreign Invaders.”

I do not believe that the things mentioned above are within the purview of the powers granted to our federal government. I am not alone in feeling that way either. Numerous past presidents have also made statements which support my beliefs.

For those of you who think that the government exists to create jobs, former President James Garfield once said, “It is no part of the functions of the National Government to find employment for the people, and if we were to appropriate a hundred millions for his purpose, we should only be taxing 40 millions of people to keep a few thousand employed.”

For those who believe that the purpose of government is to redistribute wealth to those who are needy, former President Grover Cleveland said, “I can find no warrant for such an appropriation in the Constitution, and I do not believe that the power and duty of the General Government ought to be extended to the relief of individual suffering which is in no manner properly related to the public service or benefit.”

For those who believe that it is the purpose of our government to go out and eliminate threats to our national interests, or meddle in the affairs of other nations, former President Benjamin Harrison said, “We Americans have no commission from God to police the world.”

We need to stop looking to the government to fix all that is wrong with this country and look to ourselves to take back the reins of power and do it ourselves. Leave government to its proper functions, and nothing more. As Theodore Roosevelt once said, “If an American is to amount to anything he must rely upon himself, and not upon the State; he must take pride in his own work, instead of sitting idle to envy the luck of others. He must face life with resolute courage, win victory if he can, and accept defeat if he must, without seeking to place on his fellow man a responsibility which is not theirs.”

Yet I don’t see that happening in the foreseeable future as we have become a nation of timid little sheep that elects tyrants and then meekly obeys the laws they impose upon us which deprive us of our wealth, and our liberty.

To these people whom I have failed to reach, I leave you with one final quote. It comes from an article posted in the Boston Gazette in 1788, written by Josiah Quincy, Jr and it states, “Oh, my countrymen! What will our children say, when they read the history of these times? Should they find we tamely gave away without one noble struggle, the most invaluable of earthly blessings? As they drag the galling chain, will they not execrate us? If we have any respect for things sacred; any regard to the dearest treasures on earth; if we have one tender sentiment for posterity; if we would not be despised by the whole world – let us in the most open, solemn manner, and with determined fortitude, swear we will die, if we cannot live free men!” 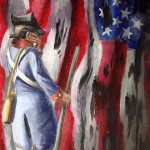 2 Responses to When Logic And Emotions Collide