We Will Not Forget

On Wednesday January 17, 1979, amidst a group of other young men, I stood in a room in Oakland California and raised my right hand and stated the following words, “I, Neal H. Ross, do solemnly swear that I will support and defend the Constitution of the United States against all enemies, foreign and domestic; that I will bear true faith and allegiance to the same…”

I can’t say what was running through the minds of those other young men in the room thirty plus years ago, but I know upholding the Constitution was the last thing on mine. I had recently been laid off due to budget shortfalls in the State of California which had caused me to lose a damned good job working for the city of Oroville’s public works department. That job had vacation, sick pay, a pension plan, and medical benefits. Without a college degree I was in need of a job, desperate, and running out of options. The military seemed like the only option left to me, so I chose the easiest path, the Air Force. As I stood there mindlessly repeating that oath I was thinking more about what I had gotten myself into than about defending a document I had never read in its entirety.

Those words I was repeating are the first part of the oath of enlistment every soldier, sailor, marine, and airman takes upon entering the enlisted corps of the United States military. I realized that upon completing that oath I would belong to the U.S. Air Force, or as my drill instructor later made clear, my ass belonged to the Air Force. I knew that I was going to have to follow orders and do what they told me to, whether I liked it or not. But the concept of my oath to support and defend the Constitution never crossed my mind.

I had a general idea of what an oath was, a promise of sorts to do something, but it wasn’t until years later that I looked the word up to see what it really meant. According to Merriam Webster’s Dictionary an oath is “a solemn usually formal calling upon God or a god to witness to the truth of what one says or to witness that one sincerely intends to do what one says.”

I didn’t know it then, but as I was standing there taking that oath I was promising to God that I would defend the Constitution of the United States…against ALL enemies. That is a pretty serious promise, and one that the breaking of which would not be a good thing if you believe in heaven and hell as I do.

So here I am, 39 years later, trying my best to keep that promise, to uphold that oath. You see, I don’t believe oaths have an expiration date. I may no longer wear the uniform of a Unites States airman, but the oath I took on that January day, and twice later upon re-enlisting for a second and third term, is just as binding upon me as it was the first time I repeated those words.

For close to two decades now I have been educating myself as to, not only what the Constitution says, but more importantly, what it meant to those who wrote it. I have read scores of books about it, and spent many an hour researching the writings of our Founders who both supported it, and those who opposed it. After all that research I have come to the conclusion that the government we have today bears very little resemblance to what the document describes. Sure at first glance it seems to be the same; we have a president, a Congress, and a Supreme Court, but that is where any semblance of similarity ends.

The powers our government wield today, both in the passing of laws, executive orders, and bureaucracies that regulate our lives for exceed the powers the Constitution itself grants to government. Our rights, which each and every member of this monstrosity of a government are sworn to protect, are under constant attack by new laws and constant reinterpretation by a Supreme Court which legislates from the bench, rather than upholds the law as written.

Our government is so out of control we may as well run the Constitution through a paper shredder, as it means nothing to them, other than the occasional lip service they pay to it. These lying thieves, these corrupt politicians and bureaucrats remind me of a passage from the Bible found in the Book of Matthew, wherein Jesus says, “This people draweth nigh unto me with their mouth, and honoureth me with their lips; but their heart is far from me. But in vain do they worship me, teaching for doctrines the commandments of men.” (Matthew 15:8-9)

You do not have to be Christian to see the similarity. These people all take similar oaths to the one I took 39 years ago, yet the words they repeat never find their way into their hearts and their actions betray them for who and what they really are; power hungry politicians whose only desire is for more power and control over the people they are supposed to represent.

Many people assume that when one enters the military they do so to protect America. Sure, that may be one function of the military, but why then does their oath of enlistment simply not say that directly? Why does it say that they are swearing to defend the Constitution, and not the country? This may only be my own personal interpretation of it, but that oath I took is not to my country, but to the principles it was founded upon and which are enshrined in the Constitution and the Bill of Rights. Therefore anyone who attempts to subvert those principles, to undermine the Constitution, is my enemy.

There is something else that people need to understand. The oath which I took states that I am swearing to defend the Constitution against ALL enemies, both foreign and DOMESTIC. My oath knows no borders and owes no allegiance to political parties. Anyone who seeks to place more power in the hands of government than is outlined by the Constitution, or seeks to have laws enacted which take away even the smallest degree of my ability to exercise any of the rights protected by the Bill of Rights is therefore my enemy as well.

You see, there is an age old legal maxim which states, “Ignorantia juris non excusat”, or as we know it today, “Ignorance of the law does not excuse you.” So even though you may not know what the Constitution says; even though you may not know what powers it grants government and which it reserves to the states, or the people; even though you may not understand the nature of, and the purpose for the rights contained in the Bill of Rights, your ignorance does not excuse you when it comes to being judged by those who do understand these things, and take their oaths to support the Constitution seriously. you are our enemies equally as would be anyone who would attack us on our own soil. Whether it be due to your ignorance, your apathy, or your complacency, you threaten all that we hold dear and we are growing very weary of you and your voting for the same old tired liars and thieves who are destroying this nation.

You may know some of us due to the fact that we are outspoken, such as myself. But you cannot possibly know who all of us are. We could be your neighbor, your pastor, or the guy who repairs your automobile. The point is there are a whole lot more of us than you realize, and we are quickly becoming fed up with the direction our country is taking. One of these days your ignorance, your support for laws which grant government more and more power over our lives and further restrict our rights, are going to force us into a corner where we have no other recourse but to take physical action rather than live out our lives as slaves.

We do not want this, as we know what it entails, but neither do we fear it should it come. You may dream of a Utopian society were all are equal, all have the same protection and security. All we see are the chains of slavery and servitude.

Just remember this, although your focus may be primarily on things that entertain you, ours is upon the erosion of our liberty and the people who brought this about. Should the time come that things turn ugly in this country, we will not forget who did this to us, and we will not forgive. 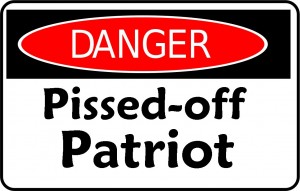 One Response to We Will Not Forget