America Is Not A Democracy 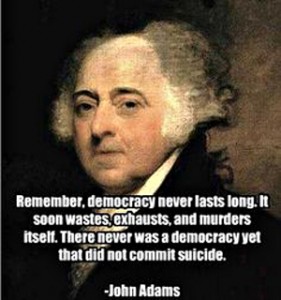 America is not a democracy, it is a Constitutional Republic. We elect those who represent us democratically, i.e. via a majority vote. That’s as far as we go as far as being a democratic society. The power and authority these elected representatives wield while serving the people are limited and defined by a Constitution, with certain rights being placed beyond their reach in a Bill of Rights which they cannot touch.

A republic can only survive as long as the electors, We the People, hold true to the principles that are contained with a nation’s constitution. The moment the people begin to disregard those principles a nation begins to transform from a republic into a democracy. In a democracy the majority always gets what it wants. It has been said that a democracy is two wolves and a sheep discussing what is for dinner. I prefer to think of it as a society in which the rights of any one group might be lost simply because a majority votes them away.

In a republic it is the principles upon which the nation was founded that should guide the voters in their decision of who to elect to represent them. Instead we have political parties with platforms that people adhere to. The problem is neither party adheres to the Constitution. As long as people place party over principle we will remain a democracy and nobody’s rights are safe.

People continue to believe in the charade that they are voting for change because they vote for someone from the right, or the left, a conservative, or a liberal, a Republican or a Democrat, when all they are doing is changing puppets who are bought and paid for servants to the corporations and banks who own this country lock, stock, and barrel.

The only way a republic can survive is if the people remain informed and hold a deep abiding respect for the principles upon which their nation was founded. The moment they give up those principles their republic is doomed. As Jefferson once said, “If a nation expects to be ignorant and free, in a state of civilization, it expects what never was and never will be.”

So I ask you, no, I beseech you, learn the principles upon which this once great nation was founded. As James Madison said, “Is there no virtue among us? If there be not, we are in a wretched situation. No theoretical checks — no form of government can render us secure. To suppose liberty or happiness without any virtue in the people, is a chimerical idea. If there be sufficient virtue and intelligence in the community, it will be exercised in the selection of these men. So that we do not depend on their virtue, or put confidence in our rulers, but in the people who are to choose them.”

If we cannot do as I ask, and return to the principles upon which this nation was founded, it will fall. If it falls the fault will not lie with those whom we elected, it will lie with the people who elected bad leaders.