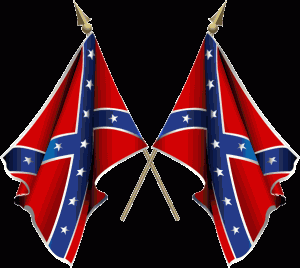 Before I get to the meat and potatoes of what I want to say, let me begin by saying one thing. Hey Mitt Romney, hey WalMart, hey E-bay, hey Amazon…FUCK YOU! Your pandering to the chickenshit sensibilities of a bunch of pampered pansies pisses me off to no end. Just because some dumbass kid who shot up a church full of blacks was seen waving a Confederate Flag you are going to discontinue selling items with said flag upon them. Again, FUCK YOU for your cowardice and political correctness.

I don’t think anyone in this country, aside from those who live in the South, understand what that flag represents. It is NOT about slavery and racism, no matter whether it has been used by groups spouting that type bullshit. The true history behind that flag is something you WILL NOT learn about in school. You will have to research it for yourself, or trust me to explain it to you.

I’ll bet you didn’t know that the real Confederate Flag looks nothing like the flag which is currently under attack by politically correct assholes who want to see it gone from the American landscape. The real Confederate Flag, the flag representing the Confederate States that seceded from the Union looks very similar to the flag we fly today. It consisted up a blue patch in the upper left corner with stars representing the states which had seceded. The remainder of the flag was two red stripes bordering a single white stripe. THAT was/is the Confederate Flag, not the one you idiots are bitching and moaning about.
The flag all you fools are so uptight over is known as the Saint Andrews Cross, or sometimes the Southern Cross because of the X pattern on the face of the flag. The flag all you fools are upset about is the flag adopted by Robert E. Lee’s Northern Army of Virginia for use in battle, it is the battle flag of their army, not the true Confederate flag. Hell, I could fly the TRUE Confederate Flag in front of my house and no one would be offended by it because they don’t even know the history behind the two flags. That’s how lacking our educations have been.

Be that as it may, the Saint Andrews Cross, or the Confederate Battle Flag has become a symbol to many. To those from the South, or those with heritage from that part of the country such as myself, it means standing up to tyranny. Slavery may have been an issue during the Civil War but it was not the CAUSE which led to it. The CAUSE was a simple line from the Declaration of Independence which states, “That whenever any Form of Government becomes destructive of these ends, it is the Right of the People to alter or to abolish it, and to institute new Government, laying its foundation on such principles and organizing its powers in such form, as to them shall seem most likely to effect their Safety and Happiness.”

The South had many reasons for seceding from the Union, and I won’t go into all of them here. All I will say is that they had had enough of the governments treatment of them and they decided to dissolve the band which held them to the Union and form their own independent nation. This is the very foundation from which our country exists as an independent nation today and not a colony of England. It was and remains their right to do so, no matter what government says.

But Abraham Lincoln felt otherwise, not the Northern States, ABRAHAM-FUCKING-LINCOLN! Lincoln decided that the government, an entity created by the people and the States had the right to demand that every state remain in the Union. To enforce his belief he took the country to war at a cost of over half a million lives. Yeah, the South lost the war but the basic root of the Civil War, if you choose to call it that, is the belief that the states, or the people, have the right to rise up and stand up to what they believe to be tyranny. Lincoln believed they didn’t, yet he himself, as a member of Congress, stated “Any people anywhere, being inclined and having the power, have the right to rise up and shake off the existing government and form a new one that suits them better. This is a most valuable, most sacred right- a right which we hope and believe is to liberate the world. Nor is this right confined to cases in which the whole people of an existing government may choose to excercise it. Any portion of such people that can, may revolutionize and make their own, of so much territory as the inhabit.” Quite the reversal of opinion from Congress to the presidency, wouldn’t you say?

And for those of you who believe Lincoln to be the great Emancipator and staunch supporter of equal rights for all men, I give you this, taken from a debate with Steven Douglas for the presidency, “I will say then that I am not, nor ever have been in favor of bringing about in any way the social and political equality of the white and black races, that I am not nor ever have been in favor of making voters or jurors of negroes, nor of qualifying them to hold office, nor to intermarry with white people; and I will say in addition to this that there is a physical difference between the white and black races which I believe will forever forbid the two races living together on terms of social and political equality. And inasmuch as they cannot so live, while they do remain together there must be the position of superior and inferior and I as much as any other man am in favor of having the superior position assigned to the white race.”
These are historical facts people, you cannot ignore them. Lincoln took our country to war to hold the Union together, not to free the slaves. The war was fought because one group felt that the government had grown oppressive and they wanted out of the Union. That is all! The Confederate Battle Flag represents THAT, NOT SLAVERY.

Even if it did, it does not matter, you cannot stifle free speech for the sake of political correctness. In 1961 Supreme Court Justice Hugo Black said, “The very reason for the First Amendment is to make the people of this country free to think, speak, write and worship as they wish, not as the Government commands.” If the government cannot restrict our freedom of speech then neither can a bunch of whiney assed pansies who are offended by what they believe a flag represents. You cannot simply wipe a part of American history out of existence no matter how offensive you believe it to be.

To end this let me add one more thing to the list of things that offend me. I am HIGHLY OFFENDED that people, because they do not know, or understand the history of the Civil War, find the Confederate Battle Flag offensive and therefore are demanding that it be removed from the landscape of America. I may be a Californian by birth, but I’m a Southerner at heart, and ya’ll can kiss my rebel ass!