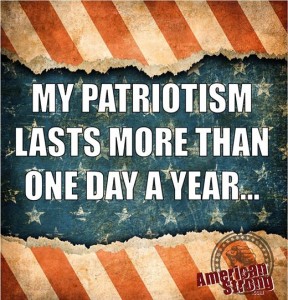 “I am commonly opposed to those who modestly assume the rank of
champions of liberty, and make a very patriotic noise about the
people. It is the stale artifice which has duped the world a thousand
times, and yet, though detected, it is still successful.”
~Fischer Ames~
(1789)

Close to 250 years ago a group of men did something that today would be considered unthinkable; they told their government to go to hell. Of course they didn’t use those words, they were more tactful than that; but what they said is that you can no longer tell us what to do; pass laws that we have no say in making, and can no longer violate our God-given rights.

Of course their government didn’t like that very much. As is the case with all government throughout the ages, once it gains control of a people, or land, it is loathe to let it go. So these radicals, these subversives, had to fight for what they believed in; placing their lives, their fortunes, and their sacred honor on the line for the cause they believed in.

Here we are today, nearly two and a half centuries later, some of us being able to trace our lineage back to those who fought for America’s independence, and we have forgotten all that they fought for; all that they bequeathed to us. It truly is shameful!

Even before their goal was achieved, while blood was still being spilled on the battlefields, John Adams wrote a letter to his wife saying, “Posterity! You will never know, how much it cost the present Generation, to preserve your Freedom! I hope you will make a good Use of it. If you do not, I shall repent in Heaven, that I ever took half the Pains to preserve it.”

Fifty years to the day of its signing, both Adams and the author of our Declaration of Independence, died. That document lies at the very foundation of everything America was built upon and it contains the immortal words, “We hold these truths to be self-evident, that all men are created equal, that they are endowed by their Creator with certain unalienable Rights, that among these are Life, Liberty and the pursuit of Happiness.–That to secure these rights, Governments are instituted among Men, deriving their just powers from the consent of the governed, –That whenever any Form of Government becomes destructive of these ends, it is the Right of the People to alter or abolish it, and to institute new Government, laying its foundation on such principles and organizing its powers in such form, as to them shall seem most likely to effect their Safety and Happiness. Prudence, indeed, will dictate that Governments long established should not be changed for light and transient causes; and accordingly all experience hath shewn, that mankind are more disposed to suffer, while evils are sufferable, than to right themselves by abolishing the forms to which they are accustomed. But when a long train of abuses and usurpations, pursuing invariably the same Object evinces a design to reduce them under absolute Despotism, it is their right, it is their duty, to throw off such Government, and to provide new Guards for their future security.”

As many times as I have read that it still gives me goose-bumps to read it; the conviction, the passion, and the TRUTH of it makes it one of the most eloquent statements ever written. That is because, unlike a vast majority of Americans, those words mean as much to me today as they did to the men who affixed their names to that document in 1776.

I often contemplate whether all those who risked so much so that we could live in a land based upon the principle of Liberty, whether they are all, as Adams said, repenting in Heaven of the efforts they undertook on our behalf? Or could they still hold a glimmer of hope because they see that there are still a few scattered remnants of those Sons of Liberty alive today?

The sad fact is this; the average Tom, Dick and Jane walking the streets of this country have absolutely no grasp of what it means to be truly free. How could they when unless you are over the age of 100 you haven’t lived in a country where freedom existed? People today may use the word liberty in their conversations but they have no idea what it means…not really.

Liberty is defined as: the state or condition of people who are able to act and speak freely; the power to do or choose what you want to. Although a state of liberty of freedom to do as one pleases it is not a state of absolute freedom as the laws of nature protect each person from harm from another. As Locke wrote in his Second Treatise, “But though this be a state of liberty, yet it is not a state of licence…The state of nature has a law of nature to govern it, which obliges every one: and reason, which is that law, teaches all mankind, who will but consult it, that being all equal and independent, no one ought to harm another in his life, health, or possessions.”

Or, as Thomas Jefferson would write in 1816, “Rightful liberty is unobstructed action according to our will within limits drawn around us by the equal rights of others. I do not add ‘within the limits of the law’ because law is often but the tyrant’s will, and always so when it violates the rights of the individual.” Yet Jefferson also said, “The natural progress of things is for liberty to yield and government to gain ground.”

Just recently America underwent another tragic shooting where someone went into a public place and opened fire on unarmed innocent people. The blood had yet to dry before the media, our elected officials, and proponents of stricter gun laws went into high gear calling for something to be done to prevent further such shootings. It mattered little that the shooters in San Bernardino obeyed every law on the books in California, which has some of the strictest gun laws in the country; it was just what those who seek to further restrict our right to be armed to justify more stringent gun laws. As Rahm Emanuel once said, “You never let a serious crisis go to waste. And what I mean by that it’s an opportunity to do things you think you could not do before.” Well that certainly fits the case every time there is a public shooting of this nature.

Your president, I say yours because I did not vote for him and I do not support anything he does, has said that something must be done to reduce the chances that shootings of this nature ever happen again. Fine, I’ll agree with that; I simply disagree as to what must be done. Mr. Obama feels that more gun laws are the cure; when by their very nature criminals are disinclined to obey the law, no matter how many new one you enact.

The problem lies with the fact that our laws restrict an individual’s right to defend themselves, especially outside their home. In 1772 Samuel Adams wrote, “Among the natural rights of the Colonists are these: First, a right to life; Secondly, to liberty, Thirdly, to property; together with the right to support and defend them in the best manner they can. These are evident branches of, rather than deductions from, the duty of self-preservation, commonly called the first law of nature.”

From St. George Tucker, Blackstone’s Commentaries, we also read, “This may be considered as the true palladium of liberty….The right of self defense is the first law of nature: in most governments it has been the study of rulers to confine this right within the narrowest possible limits possible. Wherever standing armies are kept up, and the right of the people to keep and bear arms is, under any colour or pretext whatsoever, prohibited, liberty, if not already annihilated, is on the brink of destruction.”

People have lost all sense of what unbridled liberty and freedom are, and therefore they seek out government to provide and protect them; when in truth that is not the responsibility of government, that responsibility falls upon our shoulders as our natural right of self-defense. Yet every time there is a shooting of this nature that is all I hear; stricter gun laws. Do you not realize that by limiting our right to defend ourselves we allow government more power over us? There will come a time, if it hasn’t already, when government is so big and powerful, and we are so weak and defenseless, that they can impose their will upon us without fearing reprisals.

Patrick Henry warned that this very scenario might happen one day if we accepted the Constitution as written in Philadelphia, “Your arms wherewith you could defend yourselves, are gone; and you have no longer an aristocratical; no longer democratical spirit. Did you ever read of any revolution in a nation, brought about by the punishment of those in power, inflicted by those who had no power at all?”

What has happened in this country is best explained by something Alexis de Tocqueville wrote in Democracy in America, “Another tendency, which is extremely natural to democratic nations and extremely dangerous, is that which leads them to despise and undervalue the rights of private persons. The attachment which men feel to a right, and the respect which they display for it, is generally proportioned to its importance, or to the length of time during which they have enjoyed it. The rights of private persons amongst democratic nations are commonly of small importance, of recent growth, and extremely precarious; the consequence is that they are often sacrificed without regret, almost always violated without remorse.”

That, in a nutshell, explains why the people of this country are so ready and willing to support laws which further restrict our right and ability to purchase firearms, and use them in our own defense. But, as Benjamin Franklin once said, “Those who would give up essential liberty, to purchase a little temporary safety, deserver neither liberty nor safety.”

I mean it is your choice if you wish to live your lives unable and unwilling to defend yourself, your property, OR your liberty. But you cannot demand that I go along with your decision. It is my right to be armed, my right to defend myself, my property, and my liberty.

As Ronald Reagan once said, “The gun has been called the great equalize, meaning that a small person with a gun is equal to a large person, but it is a great equalizer in another way too. It insured that the people are equal of their government whenever that government forgets that it is servant and not master of the governed.”

In closing there is but one question I want you to ask of yourselves when you begin calling for stricter gun laws; who ultimately benefits from stricter gun control laws, you or the government which you might have to fight against one day?

But make no mistake, there are remnants of the Founders left in this country. We remember Lexington and Concord; what happened there and why. We will not surrender our right to defend ourselves, or our liberty…EVER.