The Peril of Your Ignorance & Apathy 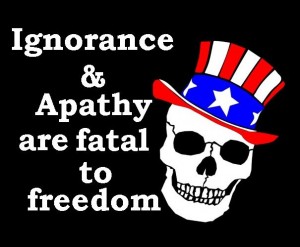 Warning: May contain language or statements that some find offensive!

When is enough going to be enough for the people of this country? What is it going to take for them to realize that our government has far exceeded the one which our Founders rose up against and fought to obtain their independence? When are people going to realize that the election process no longer means anything; that by your participating in the voting for who will be your master you are consenting to the unjust laws government passes and your own enslavement?

Our country was founded by men, and women, who were self reliant and took care of themselves and sought nothing from government other than it defend the country from attack and manage a few internal affairs; not be the provider of all our needs from cradle to grave; not be the guardian of our safety; and certainly not our executioner should we disagree with its actions.

People in this country are so damned lazy, so damned apathetic, or simply too stupid to realize that the Constitution; that document which both created and describes the powers given to our government only contains between 18-20 legitimate powers our government can act upon. Anything beyond those powers is usurpation and a step towards tyranny.

Noah Webster; Founding Father, lexicographer and whose name is synonymous with American dictionaries once said, “Tyranny is the exercise of some power over a man, which is not warranted by law, or necessary for the public safety. A people can never be deprived of their liberties, while they retain in their own hands, a power sufficient to any other power in the state.”

I don’t care if you vote Democrat, or if you vote Republican; if you vote you are simply choosing which tyrant will further enslave you. In his Notes on the State of Virginia Thomas Jefferson writes, “The concentrating [of powers] in the same hands is precisely the definition of despotic government. It will be no alleviation that these powers will be exercised by a plurality of hands, and not by a single one.”

I don’t know what goes through some people’s minds when they read these little rants I write. Do they think I do this shit for their entertainment? Is it just that I am some sort of oddity; a co-worker or friend who scribbles out political rants? This is not a game people; this is not a joke; this is deadly serious and if you do not start taking serious the things I am saying the overreach of our government’s power and authority will one day be felt by you; but by then it will be too damned late for you to do anything about it.

I don’t know, do people think that they can just be born into the greatest country which ever existed; with a system of government designed to give the people of the country the most freedom and liberty ever seen by man, AND NOT HAVE TO DO A DAMNED THING TO PRESERVE IT?

I know it was just a movie, but in the film 300 Queen Gorga stood before the Spartan Senate and said “Freedom isn’t free at all, that it comes with the highest of costs. The cost of blood.” There’s an old saying I’ve seen floating around from time to time which says, “You only have the rights you are willing to fight for.” What are YOU willing to fight for?

I bet if your government enacted a law which banned beer…banned football…or banned NASCAR there would be a revolution by tomorrow. But oh, when your most basic of rights come under attack you do nothing but vote for more of the same. YOU MAKE ME SICK!

I’ve said this before and I’ll say it again. Look at Article 1 Section 8 of the Constitution and look at the legitimate powers we gave to our government to do on our behalf. Then compare those powers to the powers it currently exercises over us. Then go browse through the list of the grievances in the Declaration of Independence and ask yourself who lived/lives under a more oppressive government; our Founders or us.

I’m not a big Ronald Reagan fan; sure he made people feel good about their country, but after all he was a professional actor and knew how to work a crowd. Nonetheless there is something he said which rings as true today as it did when he said it, “Freedom is never more than one generation away from extinction. We didn’t pass it to our children in the bloodstream. It must be fought for, protected, and handed on for them to do the same.”

Our Founders realized that by their signing the Declaration of Independence they were committing treason; that their lives depended upon the outcome of the ensuing war to secure that independence. If caught by the Kings men they would hang for declaring the principles people today take for granted; or ignore altogether.

I wonder what they are thinking; our Founders? Are they looking down on us with pride for the nation we have become or are they shaking their heads in disgust? I’m pretty sure it is the latter. In fact, I’m positive. In a letter to his wife, John Adams wrote, “Posterity! You will never know, how much it cost the present Generation to preserve your Freedom! I hope you will make a good Use of it. If you do not, I shall repent in Heaven, that I ever took half the Pains to preserve it.”

People in this country go about their lives oblivious to the threat they face from the very government which was established to secure their liberty. People watch the news; swallow the lies and propaganda hook, line and sinker, and then go back to their lives without ever seeking to discover if what they are being told about events is the truth. They swallowed the lies about 9/11; they swallowed the lies about Waco, about Ruby Ridge, and they will swallow whatever lies are fed to them about the Oregon standoff where Robert “LaVoy” Finicum was gunned down by government agents simply for standing up to its abuse of power.

In a letter to William Small, written in 1775, Thomas Jefferson wrote, “Can it be believed that a grateful people will suffer [individuals] to be consigned to execution, whose sole crime has been the developing and asserting their rights?” Well I suppose if they are too lazy to seek out the truth; if they swallow the garbage being fed to them by the news media then the answer would be a resounding YES.

I see all these people who say support law enforcement as if blind obedience to authority is a good thing. That is the creed of slaves, not free men. Think about the words law enforcement for a moment; what do they actually mean? It means those in that occupation are enforcers of the law; they enforce.

Now what did Thomas Jefferson say about liberty? Jefferson said that “Rightful liberty is unobstructed action according to our will within limits drawn around us by the equal rights of others. I do not add ‘within the limits of the law’ because law is often but the tyrant’s will, and always so when it violates the rights of the individual.”

You can continue to believe in the fraud that by our voting you are making a difference; I choose to accept the truth, that we have gone way past the point where voting is going to change a damned thing; and that goes for both the federal elections and those for my state; the whole system is rigged to give us the choice between different slave owners and I no longer wish to participate in it.

There is one final quote I’d like for you to read. It comes from a Brit; Winston Churchill, but it is valid nonetheless. Churchill once said, “If you will not fight for right when your victory is sure and not too costly; you may come to the moment when you will have to fight with all the odds against you and only a precarious chance of survival. There may even be a worse case. You may have to fight when there is no hope of victory, because it is better to perish than to live as slaves.” 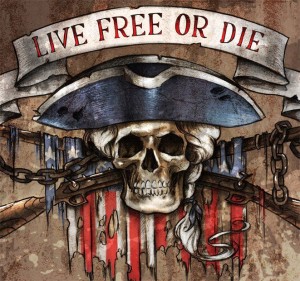