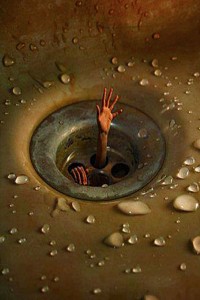 The other day at work I had a brief conversation with a guy who is still of the belief that if we can just elect ENOUGH Republicans that all will be well in America again. I was torn between throwing up right there and shooting him to put him out of his misery. Let me tell you right now, no matter how many red, white and blue donkeys or elephants you vote for, nothing is going to change in America for the better.

America is ill….deathly ill, and it is not because there are too many Republicans in office, or too many Democrats; it is because the people in this country have forsaken the principles upon which this once mighty nation was founded. It won’t be until we return to those principles that we heal; and I don’t see that happening, so it’s only going to get worse.

Day after day I sit here in front of my computer, pecking away at the keyboard, trying to compose articles that are written in such a manner as to stir people’s minds and get them to think. Repeatedly I am met with failure. I have questioned my skills as a writer, or my understanding of the facts, but there are some who see things the way I do that the problem lays not with me, but with the people to whom these articles are addressed. I have been told that 9 out of 10 Americans are simply not capable of critical thinking or reasoning.

If that is the case then it reminds me of something Thomas Paine once said, “To argue with a man who has renounced the use and authority of reason, and whose philosophy consists in holding humanity in contempt, is like administering medicine to the dead, or endeavoring to convert an atheist by scripture.”
But if reason, logic, and critical thought are all but lost skills, then what better are we than animals? It is those things which set us apart from the beasts of the wild, and if we renounce them what better are we than beasts?

Of all creatures that walk the Earth, human beings have the capacity to distinguish between good and evil, right and wrong; yet consistently, it seems, we make the wrong choices. Why is that? Why do people make the conscious choice to ignore facts and evidence, ignore the history of how their country, their system of government came into existence, and choose to believe lies and deception by those who seek only to increase their own power and control over the lives of those they are supposed to be serving?

Are people today incapable of taking something said by one of the Founders of this country, and then comparing that to existing conditions, and not see the similarity, or disparity between the America of 2016 and the America of 1787? What is so crystal clear to me seems to a mystery to the average person I encounter; as if it were shrouded from their eyes by magic. Yet the truth is right there; waiting for them to use their brains and see it.

You see, our Founders not only fought to provide a country based upon individual liberty, they also gave us warnings regarding what we must do to preserve it in its pristine form. It is only by our ignoring these warnings that we have let America become the disaster that it is today.

Take for instance the following, written by Thomas Jefferson in his Notes on the State of Virginia, “It is the manners and spirit of a people which preserve a republic in vigor. A degeneracy in these is a canker which soon eats to the heart of its laws and constitution.”

Then there is this, from a letter Jefferson wrote to Spencer Roane in 1821, “Time indeed changes manners and notions, and so far we must expect institutions to bend to them. But time also produces corruption of principles, and against this it is the duty of good citizens to be ever on the watch, and if the gangrene is to prevail at last, let the day be kept off as long as possible.”

In a message to the Officers of the First Brigade of the Militia of Massachusetts, John Adams wrote, “Our Constitution was made only for a moral and religious people. It is wholly inadequate to the government of any other.”

James Madison, in Federalist 51, wrote, “But what is government itself, but the greatest of all reflections on human nature?” Much can be taken from that if people would only think about what it says. If our government is corrupt it is because that is what we as an electorate have become…corrupt. As servants of the people who elect them, government can have no power unless we authorize, or at least tolerate, the exercise of such power.

If we demand things which violate the restrictions imposed upon government by the document which created it, then we are responsible for the outcome of the laws and programs instituted by government. If we sit back and tolerate the assumption of powers it was never intended government have because we believe government is too big, too powerful, then we deserve what happens when the laws they enact begin to affect each and every one of our lives.

Our Founders were not afraid to stand up against the mightiest empire on Earth to gain their independence; did they bequeath that gift to a nation of people to timid to stand up to the government they established to secure that liberty for us?

It makes me sick to my stomach when I hear the things people say regarding their reasons for voting for this candidate or that candidate. Not once have I heard anyone say that they intend to vote for Trump, Hillary, or Sanders because of their willingness to reduce the size of government; it is ALWAYS what that candidate promises to do for them, or the country.

All I want is for government to leave me the hell alone. Is that too much to ask these days?

I remember seeing a video one time of a mother pig and all her piglets fighting to get at her teats to feed. That image keeps coming to mind every time I hear people discussing who they intend to vote for; people lining up at the government teat to get their slice of the pie, their fair share of the benefits government provides.

If I were to ask each and every one of you what were the reasons you were voting for the candidate of your choice, how would you respond? I can almost guarantee that none of you would say that it was because your choice of candidates chose to adhere to the Constitution. You would provide me with some sick, convoluted excuse as to why your candidate was better than any of the others. You want to know how that sounds to me? That sounds as if I were to say it is better to be shot in the foot than shot in the stomach or head.

For America to change for the better it has to come from the people, not the government. The people need to stop viewing government as the panacea for all our troubles; accept responsibility for our own lives and keep government restricted to the few limited things it was created for.

It is because of your views on the reason government exists that all our problems rest. It is upon your views as to the nature of rights that allows our government to violate them. You may have been misinformed, or lied to regarding these things; but that does not mean you have to continue believing them. As human beings you are free to study the facts and make up your own minds. If you choose to go on believing lies then that is on you, not me, not anyone else. If you continue to vote for candidates based upon faulty assumptions then the fault for all this country’s problems lays upon your shoulders.

I know people don’t like it when I begin mixing religion and politics in my articles; tough, they are my articles and I can say anything I want. If you don’t like it, write your own articles countering my statements!

Our country was founded by good, honest, God-fearing men. They may have not made religion a pre-requisite of being an American, but it was upon their beliefs that they built this country. John Adams said as much in his Address to the Massachusetts Militia. If America was founded by God-fearing men, based upon their religious beliefs, then can it not be implied that anything which seeks to undermine the principles upon which this country was founded comes from the enemies of God? Can it not be concluded that anything which seeks to put men into a state of slavery to their government is evil; emanating from the devil himself?

I’m sure if you watch any amount of TV you’ve seen those Capital One credit card ads where they ask, “What’s in your wallet?” I now ask each of you reading this, “What’s in your heart?” If you want to restore America to her greatness you need to do some deep soul searching and find out why it is you support evil and corrupt people to sit in the highest seats of power.

Evil never rests….EVER. Being an American entails a never ending struggle to see that evil does not invade our lives and our systems of governance. You cannot simply vote for some candidate every couple of years and then ignore what they do until the next election cycle. Being an American requires the constant monitoring of what your government does and then standing in opposition to anything which oversteps the legitimate power granted them.
If you can’t do that you may as well just put on the shackles yourself and admit you are a slave.

All I know is that I hear people talk, I see people post things on Facebook, and nothing I hear or see gives me any hope that our nation is capable of returning to a limited form of government that respects individual rights.

Is that what you really want, because from where I’m sitting that’s what it seems like your hell bent on accomplishing.

3 Responses to Circling The Drain