I Love To Write (But Am I Wasting My Time?) 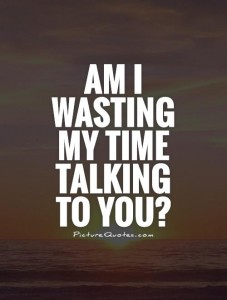 Have you ever heard the old saying; “You can’t teach an old dog new tricks?” It wouldn’t surprise me if you haven’t as it is something that was said a lot when I was a kid and not something that is said too much these days of Tweets, Facebook posts, and text messages. It’s sad though because there is a lot of wisdom in some of those old sayings.

If you’ve ever read the New Testament you will know that Christ did much of His teaching through parables; stories that illustrate points or principles. He often followed by saying “He that hath ears to hear, let him hear.” This could be construed to mean that if your heart and mind are open the truth of what He said will become apparent. Or, it could be construed to mean that if you are capable of critical thinking the truth will make itself known to you. I suppose it all depends upon how you interpret it.

Another method of teaching, or getting a point across, is through the use of proverbs. A proverb is a short pithy comment; stating a general truth or piece of advice. You can’t teach an old dog new tricks is a proverb which means you cannot make people change their established patterns of opinion or behavior.
Another old proverb is; “You can lead a horse to water but you can’t make it drink.” In general usage it means you can show someone how to do something but you can’t make them do it. I like to think of it as you can provide people with information but you can’t make them think about it.

Over the course of many years I have found that there is much truth to both of the abovementioned proverbs. I can provide all the information in the world to someone; but if they don’t think about it then my efforts are futile. Even if someone thinks about what I’ve said, and comes to the conclusion that I am correct in my point of view; if they do not change their own behavior then my efforts are futile. As Goethe so pithily stated, “Knowing is not enough, we must apply.” What good is knowledge if you do not put it to use?

Last night when I got home from work I followed my regular routine of washing the smell of prunes off my body, then sitting down to check my e mails before hitting the sack. Amongst the usual garbage was the following quote, sent to me by Mike Gaddy, “The most difficult subjects can be explained to the most slow-witted man if he has not formed any idea of them already; but the simplest thing cannot be made clear to the most intelligent man if he is firmly persuaded that he knows already, without a shadow of a doubt, what is laid before him.” (Leo Tolstoy)

What this means, if you haven’t figured it out already, is that if you are set in your ways no amount of information is going to change your thoughts on something. It will not matter if your views are based upon lies and perverted interpretations of a subject; the truth will mean nothing once you are of the belief that your views are correct.

Which leads us to the following quote from Isaac Asimov, “There is a cult of ignorance in the United States, and there has always been. The strain of anti-intellectualism has been a constant thread winding its way through our political and cultural life, nurtured by the false notion that democracy means that ‘my ignorance is just as good as your knowledge.”

If you were to take a poll of friends and co-workers, asking them one simple question; “What is the purpose for which our government was created”, I’m almost certain that you would get a different answer each time. I’m also certain that you would not get a single answer that could be backed up by what the document which actually established our system of government says are the purposes for which it was established.

If you were to show them what the Constitution says is the purpose for which our government was established, (found in the Preamble), our showed them the limited powers government was to have, (found in Article 1, Section 8), or show them the rights which government was not to touch under any circumstances, (found in the first 10 Amendments to the Constitution), it would not matter to people. If shown these things they would try to rationalize their views, yet fail to be able to provide any facts or evidence to back them up. That is what Asimov was talking about when he said most people believe that their ignorance is as good as your knowledge.

The fact that most Americans know absolutely nothing about the true history of their country or the powers given our government is not an accident; it was intentional. You have been intentionally been taught lies and distorted versions of the truth.

Our school systems are supposed to teach our children two primary things; the truth about the subjects being taught, and how to think; to evaluate facts and come to an educated conclusion based upon those facts. Instead they have taught our children lies and how to accept authority without question. It has created generations of sheep who look to government as the shepherd.

One look at how most people view the Civil War tells me that has not been done; with most people still believing, no matter how much evidence anyone provides to the contrary, that the Civil War was fought over slavery.

I could force a person to sit down and read the Declaration of Independence and the Constitution and STILL they would not change their minds about the nature and purpose for which our government exists. That is how effective they have been at programming, indoctrinating, brainwashing you they have been. It’s like Lenin said, “Give me four years to teach the children and the seed I have sown will never be uprooted.”

In my writings I often use movie quotes or song lyrics as metaphors for the point I’m trying to get across. Sometimes I have been criticized for doing so, but I believe them to be something that people are familiar with and therefore the idea may better resonate with them if I use something they can relate to.

Take for instance the scene from the Matrix where Morpheus and Neo are walking down the street and Neo seeing the woman in red. Morpheus tells Neo, “The Matrix is a system, Neo. That system is our enemy. But when you’re inside, you look around, what do you see? Businessmen, teachers, lawyers, carpenters. The very minds of the people we are trying to save. But until we do, these people are still a part of that system and that makes them our enemy. You have to understand, most of these people are not ready to be unplugged. And many of them are so inured, so hopelessly dependent on the system, that they will fight to protect it.”

Now were you to replace the words Matrix and system with government you’d have the exact point I am trying to get across. That is why whenever I make any statement saying that we need to fight back against any further growth of government, or any further violations of our rights; people automatically think of me as a threat to the American way of life. NO! Government is the threat to the American way of life, I only seek a return to the principles which this country was founded upon. But you can’t see that because you’ve been conditioned to think that only government itself can bring about change for the better; more laws, more restrictions on liberty and more benefits to ease the injustices for which people believe they are due.

Yet none of these things you expect of government are among the powers originally granted it, and it is only through usurpation and the complacency of the general public that government has assumed these powers.

You can call it for the general public good if you want; I call it tyranny; and if you had a true understanding of what tyranny meant, so would you.

Thomas Jefferson took for his own personal motto the following, “Resistance to tyrants is obedience to God.” For all you who claim to be God-fearing Christians, how can you sit back and allow your government to violate your rights, pass all these laws which, not only go against your Christian faith, but control and regulate every aspect of your lives? How do you justify your apathy, your complacency?

Jefferson also said, in a letter to Abigail Adams, “The spirit of resistance to government is so valuable on certain occasions, that I wish it to be always kept alive. It will often be exercised when wrong, but better so than not to be exercised at all. I like a little rebellion now and then.”

Today thoughts like that will get you on a government watch list, or paid a visit by agents from the Department of Homeland Security. Government, if it does but one thing, will fight to preserve its own existence. Anyone whose voice grows too loud, pushes too hard to exercise their rights, poses a threat to government and they WILL squash it. Just ask the Bundy’s, the family of La Voy Finicum, the Weavers, or those who know the truth about Waco.

Yet you have been conditioned so well that you accept the mainstream media’s version of these people, these places. You consider them to be nutcases, whackos, and threats to the safety you so desperately crave.

The only question that remains to be asked, I guess, is this; “Why the hell am I wasting my time on you?”

One Response to I Love To Write (But Am I Wasting My Time?)