My Thoughts on Brexit

Aside from the Supreme Court’s ruling on abortion, Britain’s vote to leave the European Union has been leading the news in the category of current events. Stock markets tanked the day following Britain’s decision to opt out of the European Union and White House staffers said Barack Obama’s message to British Prime Minister David Cameron could be summed up in one word; BUMMER.

Is it though, a bummer I mean?

If you look at the European Union, what is it but a joining together for the common benefit of individual sovereign nations? That sounds awful familiar; I wonder where I’ve heard that before? Of course, the United States of America; that’s where.

In a pure democracy the will of 51% of the people is all it takes to establish sovereignty. In a Republic such as ours which is based upon democratic principles, but ruled by law, the majority still remains sovereign, but they are limited by law as to what they can ask their representatives to do on their behalf; a minor, but important difference.

If one looks at the timeline of man’s existence on Earth, one could not help but see that at some point in our history there was no government. Therefore the question begs to be asked; prior to the formation of the first system of governments did sovereignty not exist? Of course it did, it rested where it rightly belongs; with man.

This fact was reaffirmed in the Supreme Court case of Chisholm v. Georgia (1793) wherein the Court ruled, “At the Revolution, the sovereignty devolved on the people; and they are truly the sovereigns of the country, but they are sovereigns without subjects and have none to govern but themselves; the citizens of America are equal as fellow citizens, and as joint tenants in the sovereignty.”

Man, in his natural state, is sovereign over himself, and only himself. His rights and freedoms are fully enjoyed, restricted only by the equal rights of all other men. Men form civil societies to better secure their rights and provide for themselves; surrendering a portion of their freedom to achieve these goals; but only enough to achieve them and nothing more. Men form governments, at least in our case, for the same reason.

As Thomas Paine said, governments can only exist in two forms; either power must be assumed, or it must be granted. Assumed power, such as monarchy or dictatorships, restrict freedom, while granted power promotes it; as long as the government created sticks to the specific powers granted it.

Brexit was an act of the sovereign people of Britain voting to leave a voluntary union of sovereign nations and return to being an independent sovereign nation; free to regulate their internal affairs. As it was a voluntary union of each member state it was also within each member state’s right to severe the bond which held them to the European Union; if a majority of the voters in that state should so decide to do.

Does it matter what the reason might be that a member state might choose to leave a voluntary union of sovereign states? Of Course not. At one point Greenland was also a member of the EU but left over fishing rights. British voters had their own reasons, and the majority spoke. It is the nature of sovereignty that the sovereigns can severe ties to a larger body whenever remaining bound to that body is detrimental to their general welfare.

Is not that the very principle which is contained within our own Declaration of Independence? Did not Thomas Jefferson say that “…That whenever any Form of Government becomes destructive of these ends, it is the Right of the People to alter or to abolish it”?

If the British people decided that further attachment to the European Union was not in their best interests then it was their right as a sovereign nation to severe the ties which bound them to the EU and there was nothing the EU leadership in Brussels could do or say about it.

If it is fully surrendered then why, in our case, do we still vote, call or write our representatives, or even care who gets elected? If government is the sovereign in this country what difference does the voice of the people make when government is free to do as it pleases?

If government is not sovereign, then it must be bound by something which limits its powers or protects the rights of the people it represents. In our case that would be our Constitution and Bill of Rights. These are both laws by which the government is bound to obey, no matter how loud the voice of the people who ask for them to be violated.

Let’s say you live in a neighborhood containing ten homes. Your child is a troublemaker, always annoying your neighbors, stealing or damaging their property. They get together and decide for their sanity that your child must be killed. Can they petition the city government to have your child executed simply because he/she is a pain in the ass? Of course not, there are laws prohibiting murder; unless the person is found guilty by a jury of his peers.

The same goes for our system of government. It has certain powers which when it exceeds its acts become usurpation and tyranny. But when Thomas Jefferson penned the Declaration of Independence he also said, “Prudence, indeed, will dictate that Governments long established should not be changed for light and transient causes; and accordingly all experience hath shewn, that mankind are more disposed to suffer, while evils are sufferable, than to right themselves by abolishing the forms to which they are accustomed. But when a long train of abuses and usurpations, pursuing invariably the same Object evinces a design to reduce them under absolute Despotism, it is their right, it is their duty, to throw off such Government, and to provide new Guards for their future security…”

When America won its independence from Britain each individual State, or Colony, became an independent sovereign nation. This fact was recognized in the Treaty of Paris which ended the Revolutionary War, “His Brittanic Majesty acknowledges the said United States, viz., New Hampshire, Massachusetts Bay, Rhode Island and Providence Plantations, Connecticut, New York, New Jersey, Pennsylvania, Maryland, Virginia, North Carolina, South Carolina and Georgia, to be free sovereign and independent states, that he treats with them as such, and for himself, his heirs, and successors, relinquishes all claims to the government, propriety, and territorial rights of the same and every part thereof.” (My emphasis)

As free sovereign and independent states they were free to form unions between each other; when it was for their mutual benefit, but more importantly, they were also free to severe any unions they may have formed when it was felt that remaining in the union was not in their best interests.

Why then all the hatred over the Confederacy? Where they not exercising what was their right; to leave a voluntary union of independent sovereign states to form a system of government that best suited their needs? Does it matter if their reason was the federal government’s interference with the institution of slavery or its imposing tariffs upon them whose funds were spent on improvements in the North? No, they felt, for whatever reason, that to remain members of the union would be detrimental and therefore seceded from the union.

The government of that union, not the Northern States but the government, in the personage of one Abraham Lincoln, said that they could not do that and raised an army to prevent them from leaving. The cost? Well over half a million lives and untold destruction of the economy and infrastructure of the South; not to mention the tyrannical state that was known as Reconstruction after the war; with puppet governments and armed occupation to ensure their compliance with rules imposed upon them by a government which represented Northern interests.

Yet people have the audacity to call the South evil when what the North inflicted upon the South, both during and after the war, is as equal to the atrocity that was slavery. Yet Lincoln is memorialized and idolized as a great man, a great president and men like Robert E. Lee, Thomas ‘Stonewall’ Jackson, and Jefferson Davis are considered treasonous. It is an offense to the spirit of men like Jefferson, Adams, Franklin, and the rest of those who fought for our nation’s independence that history records the acts of men who followed in their footsteps be labeled as traitors.

The Steven Spielberg film Lincoln is made to show Lincoln as this great humanitarian who fought valiantly to end slavery. Maybe he did, maybe he didn’t; but at what cost? There is one line in that movie that rings truer than anything else found within it. It comes from Jackie Earl Haley who portrays Andrew Stevens, Vice President of the Confederacy, “Your union, sir, is bonded in cannon fire and death.”

Of all the things the Civil War did, the eradication of the idea of State sovereignty was the greatest loss felt by both the states, and the people of this nation. At the conclusion of the Civil War, with Lee’s surrender at Appomattox Courthouse, the government became the supreme sovereign; having proved its willingness to use force to compel obedience to whatever decisions it hands down.

We have ALL lived as slaves ever since. Lincoln may have issued the Emancipation Proclamation, he may, or may not, have pushed for ratification of the 13th Amendment freeing the slaves of the South, but each and every American born since that tragic day when Lee surrendered, has been a slave to almighty government.

I’m surprised the rain did not fall from the heavens in bucketfuls as our Founders must all have wept tears of sadness over what they were witnessing happen to the freedom they fought so hard to preserve for us. If July 4, 1776 was the day we gained our independence, April 9, 1865 was the day we lost it again. 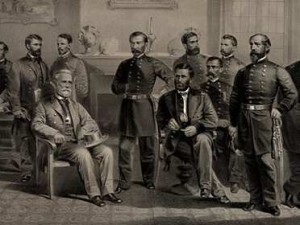