Day Of Infamy Or Day Of Deceit? 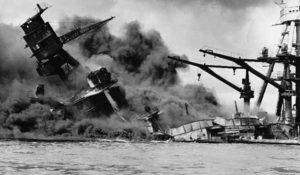 All week long NBC has been running a series commemorating the attack upon Pearl Harbor 75 years ago. My father had just completed boot camp and arrived at Pearl Harbor, to be assigned to his ship, just days prior to the attack which led the U.S. into involvement in World War II and which FDR declared was a day that would live in infamy.

While I honor those who perished that day, and those who fought the battles in both the Pacific and European fronts, I do not buy into the whole surprise attack nonsense that the media keeps telling us. It is my belief that the lives lost at Pearl Harbor on December 7, 1941were purposefully sacrificed to garner support among the people for U.S. entrance into World War II.

After World War I the people of America had developed an isolationist position; not to become involved in the affairs of other nations; including their wars. During his campaign for president FDR is quoted as saying something along the lines of, “I will not send your boys off to fight in wars on foreign soil.” He knew that to break that promise would lead to calls for impeachment; something that was taken a bit more seriously in the 1940’s than it is today. Yet secretly he itched to find a way to help stop the spread of Nazism in Europe, and particularly defend America’s ally Britain.

Roosevelt had even attempted to goad the Nazis into directly attacking the US by supplying ships to their enemies and depth charging their submarines. But the Nazis realized that the entrance of the US into World War I had changed the tide against them and resisted attacking the US; which would have given American an excuse to enter the war against them. So FDR needed another way into the war; a back door so to speak.

Roosevelt found that back door in the Tripartite Pact; a defensive treaty signed by Germany, Italy and Japan. Article 3 of this pact states: Japan, Germany, and Italy agree to cooperate in their efforts on aforesaid lines. They further undertake to assist one another with all political, economic and military means if one of the Contracting Powers is attacked by a Power at present not involved in the European War or in the Japanese-Chinese conflict.

Therefore, if FDR could just provoke the Japanese into attacking the US then he would get what he wanted; a way into the European conflict. War with Japan may have been on FDR’s mind, but it was primarily the spread of Nazism in Europe for which FDR sought a means to involve the US in the war.

How many lives were lost in the battles in the Pacific just because FDR sought to stop the spread of Nazism? My namesake, Neil Hampton Rood, lies at the bottom of Kula Gulf where the USS Helena went down; along with the bodies of 168 of her crew. Then there are the larger land battles, such as Iwo Jima where for 36 days the US fought to take the island held by 22,000 Japanese. After the dust settled 6,800 US fighting men lay dead; twice the number that were lost on 9/11. Then there was the Battles at Midway, Guadalcanal, the Mariana Islands and the retaking of the Philippines.

So many lives lost over something we have been lied to all these years. When are people going to open their eyes and realize that their government routinely lies to them, and keeps secrets from them which they have a right to know?

FDR may have stood before the nation and tell the American people that the attack upon Pearl Harbor was a surprise, but it was anything but a surprise; it was hoped for and provoked by Roosevelt. In January of 1941 President Roosevelt sent his advisor Harry Hopkins to England to meet with Prime Minister Winston Churchill. During that meeting Hopkins told Churchill, “The President is determined that we [the United States and England] shall win the war together. Make no mistake about it. He has sent me here to tell you that at all costs and by all means he will carry you through, no matter what happens to him — there is nothing he will not do so far as he has human power.”

But FDR could not just enter the war without raising the ire of the American people; so he sought to provoke Japan into firing the first shot which, due to the Tripartite Pact, would cause Germany to be forced to declare war upon the US should the US go to war with Japan.

On October 16, 1941, the Secretary of War, Henry Stimson, made the following entry into his diary, “We face the delicate question of the diplomatic fencing to be done so as to be sure Japan is put into the wrong and makes the first bad move — overt move.” I don’t know about you, but sounds a lot to me like they were provoking Japan; trying to get them to make the first move.

This belief is reaffirmed in a little known thing called the McCollum Memo. On October 7, 1940, Lieutenant Commander Arthur McCollum, of the Office of Naval Intelligence, submitted a memo to Captains Walter Anderson and Dudley Knox, (both of whom were close advisers to Roosevelt), outlining 8 steps which could be taken to counter Japans power in the Pacific region and provoke an attack against the US.
Those steps were:

-Make an arrangement with England for the use of British bases in the Pacific, particularly Singapore

-Give all possible aid to the government of Chiand-Kai-Shek, (China)

-Send a division of long range heavy cruisers to the Orient, Philippines or Singapore

-Send two divisions of submarines to the Orient

-Completely embargo all US trade with Japan, along with a similar embargo by Britain

The effect of implementing the McCollum Memo was to essentially force Japan into a corner where it had but one recourse; attack the United States. The question then was where to attack to inflict the most damage?

Why is it that the US fleet was stationed at Pearl Harbor instead of the West Coast as it normally was? In 1940 the fleet commander, Admiral J.O. Richardson flew to Washington D.C. to protest the location of the fleet. Among his reasons were that it could not be effectively rigged with netting and baffling to defend against torpedo planes; Hawaii would be much harder to resupply than a location on the mainland; and Pearl Harbor lacked sufficient fuel supplies and dry docks while it kept the men far from their families; creating morale problems.

The argument became extremely heated and the Commander left the meeting to later say, “I came away with the impression that, despite his spoken word, the President was fully determined to put the United States into the war if Great Britain could hold out until he was reelected.” It is interesting to note that shortly after this meeting Commander Richardson was relieved of command and replaced with someone who would follow orders; H.E. Kimmel.

But the nagging question is, did the attack take America, and particularly the Roosevelt administration by surprise? I don’t think it did, and I’ll explain why.

Prior to the attack the Japanese had developed a unique code system for classified messages which was known as ‘Purple’. According to some sources the US had broken that code and developed a machine to decipher all coded messages sent by the Japanese. These decoded messages were known as ‘Magic’. It is funny that copies of that machine were kept in Washington D.C. and one was even sent to Prime Minister Churchill…but none were sent to the Commander of the Pacific Fleet at Pearl. The reason was given as being that the diplomatic correspondence of the Japanese was of little interest to the troops.

But was it of little interest, or did they just want to keep them out of the loop?

On December 4, 1941 the United States Office of Naval Intelligence issued a memo entitled, “Methods of Operation and Points of Attack.” In that memo it states, “In anticipation of possible open conflict with this country, Japan is vigorously utilizing every available agency to secure military, naval and commercial information, paying particular attention to the West Coast, the Panama Canal and the Territory of Hawaii.”

Other messages and memos indicate that the Japanese were breaking Pearl Harbor up into grid patterns; which could only mean that they were preparing for an attack. But there is one other bit of information which lends credence to the fact that Roosevelt must have known an attack was imminent.
Japan had a history of severing all diplomatic ties with a country it intended to attack or invade. They had done it in the past, and they did it again just prior to their air attack upon Pearl Harbor. In fact, one of the deciphered messages indicated that if an attack upon the US was imminent that the message Higashi no kaze ame or East Wind, Rain would be broadcast prior to the attack.

On the morning of December 4, 1941 that very message was heard and those in the loop could not have mistaken its meaning. It is suggested that the Japanese Embassy in Washington DC, upon hearing that message, ran into their embassy and began destroying their codebooks and cryptographic equipment so as to not give the US access to them when they inevitably were detained after the attack.

I can possibly accept one coincidence or rumor, but when a string of them like this come together it stinks of lies and cover ups. Of course they will call it all conspiracy theory, what else could they do? What would happen to America’s confidence in their government to do the right thing if it were proven that they knew in advance that we were to be attacked; and they allowed it to happen?

I’m just wondering; if I have raised any doubts in your minds as to what happened on that morning of December 7, 1941, is there any chance I may have also caused you to wonder what really happened on the morning of September 11, 2001?

One Response to Day Of Infamy Or Day Of Deceit?