Logic Has Left The Building 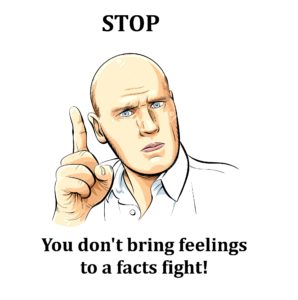 “Mankind are governed more by their feelings than by reason.”
~Samuel Adams~

I have come to the conclusion that no matter what I say I’m not going to get through to more than just a handful of people. You see, people like me deal in the realm of facts and evidence while most people live in the realm of feelings and emotional responses to issues. The two worlds are so incompatible that those living in them will never see eye to eye on the issues.

Take for instance what happens whenever there is a shooting somewhere that dominates the news. Those in my world examine the facts of the story; why the shooter did what they did, how could the people have been better prepared to defend themselves against such an attack, and why there was no one there with a gun to stop that person before they shot all those people. Those in the world of emotions cry, “We need tougher gun laws to prevent things like this from happening again.”

It does not matter to these feel good about themselves gun grabbers that the person who commits these type crimes is already guilty of violating at least half a dozen laws; they believe just one more law could have prevented this from happening. They feel that something must be done to prevent crimes like this, while we ask the why behind a person committing a crime like that. Those in the Utopian dream world where crime can be eradicated by more laws believe that society must bear the burden for the crimes committed by others; while we believe each individual, and each individual alone should be held accountable for their actions.

Let me tell you an inconvenient truth; were you to go door to door and confiscate every gun in the United States, crimes like this would still happen; people would find other ways to kill people. Let me tell you something else; when I was growing up guns were just as prevalent as they are today; although not the quality and capability of them. I could arm a small army with the rifles hanging in the rear windows of the pickup trucks at my high school; yet we never had a school shooting. What does that tell you? Oh, I forgot, you don’t believe in facts; but the fact is that guns do not kill; it is the person squeezing the trigger that kills. The problem with these crimes is not the preponderance of guns in America; it is a societal issue; a decay of morals that causes individuals to want to go out and commit these types of crimes. But people don’t want to hear that as it requires people to accept responsibility, to change their attitudes or values instead of just passing a law that makes them feel good about themselves; that they are doing something to prevent gun crimes.

And this isn’t just about guns; it’s about a complete change in how society views what is acceptable behavior and what isn’t.

As an example look at all the protests that happen every time something happens that people don’t like. People flood the streets, blocking traffic for those who had no part in whatever made the protesters upset. While it is their right to protest, they do not have the right to disrupt the lives of others. What do you think would happen if every time a new gun law was passed thousands of angry gun owners took to the streets blocking traffic? Be honest with your answers please!

I can venture a guess as to what would happen; the police would come out in droves to chase us off the streets; that’s what would happen. And you would support their actions. Yet if the police did the same thing every time there was a protest for a politically correct cause you would cry POLICE BRUTALITY!

Have you ever heard the term double standards? You ought to look it up if you haven’t; you might find a mirror reflecting right back at you.

All one has to do is watch the news, or pay attention to what is garnering the most attention on Social Media or YouTube; they are all stories that tug at your gut strings; draw some sort of emotional response from you. How much attention do you think would be paid if some news anchor sat down and broke down clause by clause how some piece of legislation passed by Congress violated the Constitution? People would be changing channels quicker than a lightning strike; that’s how much attention people would pay to something factual.

As Don Henley sings in his song Dirty Laundry:

I cannot count the discussions, or arguments if you prefer to call them that, which I’ve had with people where all I heard from them was I think, I feel, or I believe. It is the rare occasion that I encounter someone with differing views who can back their views up with facts. I suppose these people never took a debate class in school as they would have learned that if you are going to support a position you had better have some facts to back it up.

If the stakes weren’t so high, if the choices people make as to what they will allow their government to do didn’t affect me, I would simply say to hell with it, let you suffer the consequences of your decisions. But the choices you make affect me as well, and I’m getting awful damned tired of your stupid choices!

Have you ever in your lives known someone who was engaged in destructive behavior and you tried to stop them before they hurt themselves; only to be ignored time and time again? That’s how I feel with most people. It is not that I hate people as individuals; I just hate their ignorance, their apathy, and their complacency. I hate the fact that people’s priorities are way out of whack; that they care more about the lifestyles of celebrities, the outcome of some sporting event, or the latest app for their iPhone than they do the abuses of power being committed by their government.

On the final day of the Constitutional Convention, before the vote was taken to accept or reject the completed document, a speech was read, prepared by Benjamin Franklin, stating why he supported the document. In his speech it states, “…I agree to this Constitution, with all its Faults, if they are such; because I think a General Government necessary for us, and there is no Form of Government but what may be a Blessing to the People if well administered; and I believe farther that this is likely to be well administered for a Course of Years, and can only end in Despotism as other Forms have done before it, when the People shall become so corrupted as to need Despotic Government, being incapable of any other.”

The question I want to ask all of you is, have we reached that point? Are we now at the stage where we are capable of having a government based upon individual liberty, or have we become so morally corrupt that we need a despotic government to keep our baser sides in check?

I don’t know about any of you, but I feel confident that I am capable of living without government telling what I can and cannot do. I value the rights of others just as much as I value my own rights. I may not always agree with what you say or believe, but I will defend your right to say those things to my dying breath. If only you would show the same respect for my rights then this country would take on giant step towards recovery.

That being said, make no mistake about it, if you believe we need this all encompassing government which rules and regulates every aspect of your life, COUNT ME OUT! As Patrick Henry said, “Give me liberty or give me death.”