Sometime in the mid Nineteenth Century the English historian and politician Lord Acton uttered words that have echoed down through the decades since first being spoken, “Power tends to corrupt and absolute power corrupts absolutely.”

Abraham Lincoln said something similar, “Nearly all men can stand adversity, but if you want to test a man’s character, give him power.” I guess Lincoln failed his own test as far as that goes; but that’s an issue for another time and another place.

What is power? One of the definitions for power is “the capacity or ability to direct or influence the behavior of others or the course of events.” Power, as it relates to the subject I wish to discuss, is simply the ability to get others to obey you.

It is because by our, or at least our ancestors, consenting to this Constitution that our government came into existence. Therefore, any power they have is derived from the will of the people, and can be revoked if those responsible for adhering to the limits of that power overstep it.

After the end of what you call the Civil War, the Supreme Court handed down a ruling in the case of Ex parte Milligan which, in part, states, “The Constitution of the United States is a law for rulers and people, equally in war and in peace, and covers with the shield of its protection all classes of men, at all times, and under all circumstances.” Although I dislike their usage of the word rulers, instead preferring they had said public servants, I agree with the overall sentiments contained within that statement.

And if our government exists by consent of the people, what do you call the people who continue to vote for the same class of politicians over and over and over again? Famed author of Nineteen Eighty Four, George Orwell, once said, “A people that elect corrupt politicians, imposters, thieves and traitors are not victims… but accomplices.”

Our government only has the power which we consent to. I don’t know how well a movie analogy will fit in to this, but let’s give it a try. How many of you have seen the remake of the film Clash of the Titans, starring Sam Worthington as Perseus, and Liam Neeson as Zeus? Well there is one scene early on in the film that shows the gods talking about how mankind’s prayers to them fueled their power; and due to mankind losing faith in the gods their power was dwindling.

Aside from the few specific powers granted government, it was created to expand and secure the liberty of the people of this country. But liberty is not a gift bestowed upon us by government, it is a state of mind. If you pray at the altar of government, (at the polls) and place all your trust and faith that what they do is in your best interests, then you are not freemen when the laws government passes restrict your ability to freely exercise your rights.

But that is a choice each person makes, not something that is imposed upon them. If we have corrupt government it is because the people tolerate corrupt government. It is only because we tolerate them, consent to their abuse of power, that this power has any sway over our lives.

Far too many people vote according to the two party paradigm; choosing the candidate from amongst those offered by their respective political party which most closely matches their own beliefs. Rarely is it that the limits imposed upon government by the Constitution are given any consideration by the voters of this country. One has to but look at how the general voting public treated Ron Paul to confirm this fact.

I’ve heard time and time again that I should give Trump a chance; that he hasn’t even been sworn in yet. Why should I give him a chance when the things he says he intends to do violate the power given the office to which he has been elected, and overstep the specific powers granted government?

I heard the same thing when Obama was first elected and my answer was the same; yet when I said that those on the political right applauded me. Now they condemn me because they say my lack of support for him could have led to Hillary becoming the next president.

It’s always we’ve gotta give a new Democrat or a new Republican a chance. Why not try something novel and give the Constitution a chance instead of the platforms of some political party?

People say that we can’t cut back on all these programs the government has established; what would happen to the people if they cut the funding for them? Well, what about the States? The 10th Amendment does say that whatever powers not granted the federal government are reserved to the States; so let the States fund these programs. If a State chose to impose all kinds of regulations which hampered its economic growth, then the workers and companies would move to another State and then the State would realize that for it to prosper then it must ease back on its control over the free market. If they did that, and the climate become conducive to economic growth, then jobs would flood back into that State and there may not be the need for programs such as food stamps and welfare. That’s how they system was designed to work. The less government interferes, the more freedom exists and our country thrives. On the other hand, the opposite is just as true, the more government interferes, the worse off our country becomes.

Unfortunately something Frederic Bastiat said is true, “But there is also another tendency that is common among people. When they can, they wish to live and prosper at the expense of others.” Bastiat tells us that this is the origin of plunder; “But it is also true that a man may live and satisfy his wants by seizing and consuming the products of the labor of others. This process is the origin of plunder.”

Plunder is the fuel which feeds governmental growth. The more people ask government to do for them the more power it gains over their lives, and the less they enjoy true freedom. There is a quote that I’ve heard attributed to everyone from Sigmund Freud to Eleanor Roosevelt, so I can’t say for sure who said it…but somebody did otherwise I’d never have heard it. The quote states, “most people do not really want freedom, because freedom involves responsibility, and most people are frightened of responsibility.”

And that’s the problem right there; people don’t want freedom when it involves a little effort to maintain, or a certain degree of sacrifice on their part. Instead, they are content to give government the power to take care of them at the loss of their freedom. It won’t be until that attitude changes that we can effect true change in America and rid our government of the corruption that permeates it.

I can’t do it by myself. One hundred Americans could not do it, nor could one million. It must come from an overwhelming majority of the people; their hearts burning bright with the flame of liberty, for change to come; just as it did among those who founded this country in 1776, and again fought for their independence in 1861.

Governments appetite for power is insatiable and it won’t rest until it has sapped away the last of your liberty; placing you in complete subjugation to its will. Once government has attained the degree of power which our government currently has, it won’t give it up without a fight. That much is a given. Therefore, if we wish to become truly free in this country we must take back that power that they have amassed over our lives and our liberty.

As Patrick Henry once said, “Guard with jealous attention the public liberty. Suspect everyone who approaches that jewel. Unfortunately, nothing will preserve it but downright force. Whenever you give up that force, you are inevitably ruined.”

But before we can do anything people need to stop putting their faith and trust in a system that is beyond salvage, or at least is unsalvageable until it has been fully purged of the corruption that eats away at our Constitution and our liberty.

To do this people need to learn what the limits originally imposed upon government are, and then withdraw their support from this corrupt entity we call government by refusing to vote. Only then can we take the first step towards restoring our nation to the Constitutional Republic established in 1788.

Power does corrupt. Unfortunately with the ultimate power in this country resting in the hands of the people, it is the corruption of the people which has allowed our government to become corrupt.

A few more quotes and then I’ll wrap this up. First, Jefferson stated, “It is the manners and spirit of a people which preserve a republic in vigor. A degeneracy in these is a canker which soon eats to the heart of its laws and constitution.”

And second, “Time indeed changes manners and notions, and so far we must expect institutions to bend to them. But time produces also corruption of principles, and against this it is the duty of good citizens to be ever on the watch, and if the gangrene is to prevail at last, let the day be kept off as long as possible.”

Next, when the Constitution was presented to the convention for their vote, a speech prepared by Dr. Franklin was read to the delegates. In that speech we find the following words, “In these Sentiments, Sir, I agree to this Constitution, with all its Faults, if they are such; because I think a General Government necessary for us, and there is no Form of Government but what may be a Blessing to the People if well administered; and I believe farther that this is likely to be well administered for a Course of Years, and can only end in Despotism as other Forms have done before it, when the People shall become so corrupted as to need Despotic Government, being incapable of any other.”

Freedom or security are both choices we make as a nation. Neither come without cost. Security comes at the cost of your freedom. Freedom comes at the cost of your comfort. As Ronald Reagan said, “Freedom is never more than one generation away from extinction. We didn’t pass it to our children in the bloodstream. It must be fought for, protected, and handed on for them to do the same.”

Finally, Reagan also said, “To sit back hoping that someday, some way, someone will make things right is to go on feeding the crocodile, hoping he will eat you last – but eat you he will.”

If you want to fix what is wrong with this country you have to stop feeding the crocodile, [government], and start reasserting your sovereignty and your power to keep government within the specific confines of its power as outlined by the Constitution. They must again learn to fear our voices, not treat us like slaves.

And to quote Forrest Gump: 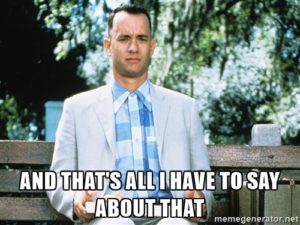