You Cannot Avoid The Consequences of Your Actions 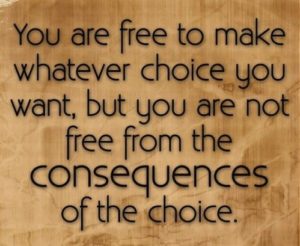 For every action, there is an equal and opposite reaction.
~Sir Isaac Newton~
(Third Law of Physics)

The other day as I watched the film Snowden the germ of an idea took place in my head and it wasn’t until earlier this morning, during a conversation with Jeffrey Bennett on Facebook that it came into full bloom. The scene from Snowden which lies at the root of all this came as Snowden was taking a polygraph, (lie detector), test prior to being hired by the CIA. One of the questions asked of him was, “Do you think that America is the greatest country in the world?”

What is America and what is it that makes it so great? From space America looks like just another land mass among the many that comprise Planet Earth. America borders Canada to the North and Mexico to the South; what makes us any better than them?

What made America great where the ideals held by those who established this country those many years ago; “…that all men are created equal, that they are endowed by their Creator with certain unalienable Rights, that among these are Life, Liberty and the pursuit of Happiness. — That to secure these rights, Governments are instituted among Men, deriving their just powers from the consent of the governed…” If that is the principle which made America great, which led so many to leave their places of birth to start anew, doesn’t it stand to reason that if we abandon those principles that America might cease being the greatest country in the world?

Yet we are, for the most part, an arrogant people. We believe ourselves to be better than the rest of the world and that the rules that apply to them do not apply to us. A perfect example of this is how people are continually blaming Russia for the loss of Hillary Clinton in the recent presidential election. Even if it were true; SO WHAT; has America not done the same?

In the early 1950’s Iran’s Prime Minister Mossadeq sought to audit the books of the Anglo-Iranian Oil Company; a British owned company we now know as BP. When they refused the Iranian Parliament nationalized their oil fields; shutting US and British Oil companies out.

In 1953 joint coup, led by both British Intelligence and the CIA, ousted the Prime Minister and installed the Shah of Iran as the new leader. The Shah was much friendlier towards Western interests and it was through US support that he remained in power until he was overthrown in 1979.

What people fail to realize is that there are consequences to actions such as those taken by the US and Britain. The Shah stayed in power so long because he was brutal to his own people. The standard of living for a large majority of the people plummeted, while creative, artistic, and intellectual endeavors were stifled. Those that opposed him were imprisoned and tortured by SAVAK, the Iranian Secret Police. It is estimated that around 60,000 Iranians lost their lives under the Shah’s regime.

Is it any wonder that anti-American sentiments led them to support the Ayatollah Khomeini’s rise to power in the late 70’s, and the corresponding Iranian Hostage Crisis which occurred during the Carter administration? Yet America did not learn, we played the same game with Saddam Hussein, and look where that got us.

We are quick to blame other countries of crimes against humanity, or interfering in the affairs of our countries, yet we do the same on a routine basis. I guess that mirror, when shined upon our own crimes, provides too ugly a picture for us to face. So we ignore it; still believing that we are the greatest country in the world and hold the high moral ground.

This isn’t something new for America; it dates back to the Jefferson administration and the Barbary Pirates War when those ‘boots on the ground’ attempted to oust the Bashaw of Tripoli and replace him with his exiled brother Hamet. Since then we have repeatedly interfered with the internal affairs of other countries, and sought to install leaders who were friendly towards US interests. Even if the claims against Russia are true, what makes their actions any different from ours?

If the freedoms our Founders fought to secure for themselves, and posterity, are what made America great, does it not make sense to fight to ensure that they survive for future generations? How then can we justify this nonsense more commonly known as Political Correctness?

You can call Political Correctness by that name, but it is nothing more than censorship of ideas and beliefs that others find uncomfortable or offensive. When you attempt to silence offensive ideas or statements you are essentially killing free speech and the open discussion, or debate, of ideas. What you end up with is a majority of the people holding the same beliefs; a drone or hive mentality where everyone thinks the same, and opposing ideas are not tolerated.

And you call that freedom?

We believe we are the greatest country in the world, and demand that those who come to this country adhere to our belief systems, learn our language, and obey our laws. Yet how many Americans travel to other countries and act just those they condemn in America?

Having served for 13 years in the military, with 8 of them in other countries, I can attest to the fact that many Americans go abroad with the belief that they need not learn the language of their host country, heed their customs, or obey their laws. Yet we wonder why those countries have such a scornful opinion of Americans. How can they have any other when their only experience has been the Americans they encountered face to face?

I remember the outrage America felt when Michael Fay was sentenced to six lashes with a cane in Singapore for his crimes of theft and vandalism. I, on the other hand, applauded Singapore for sticking to their guns.

Then there is the story of Otto Frederick, a University of Virginia student who was sentence to 15 years hard labor in North Korea for stealing a propaganda banner for a souvenir. Sure, 15 years may be a harsh sentence for theft, and yes, maybe North Korea was using this as payback to the US for our foreign policy towards them; but this kid should have thought long and hard before he attempted to steal something in a country that our government says is our enemy. I say, let him serve as a lesson that Americans can’t act like they do at home when abroad.

On the home front America’s cry about the rising crime rate; calling for the restrictions of our liberties every time someone commits a horrific crime. Nobody twisted these people’s arms, forced them to commit these crimes; they did so of their own free will.

Yet criminals are treated as victims of society these days; while those who seek to protect their lives and their property are treated as criminals. Every time some poor kid is gunned down while committing a crime the media goes into overdrive; showing friends and family of the criminal who cry ‘He was a good kid’ making the victim of the crime out to be a cold blooded killer.

And yet we wonder why crime continues to go up? There used to be an old saying that I don’t hear too often these days. It went something like this, “If you can’t do the time, don’t do the crime.” I would add, “Break into my house and you won’t need the cops, you’ll need a coroner.”

You want crime to go down, stop treating criminals like victims and victims like criminals. Make those who commit true crimes against others pay for their acts, make them fear getting caught or killed, and crime will go down.

People also complain about the lack of jobs, or at least good paying jobs. Yet they never stop to think that many of those good paying jobs held by their fathers, and their grandfathers no longer exist because the government made operating in the US too costly, or prohibitive for them. How many companies moved their operations abroad because of regulatory restrictions which raised their cost of doing business in America to the point they just up and left? Sure, many of them went offshore due to the cheap labor and tax exemptions in countries like China, Taiwan, and others, but many left because government interfered too much and they could no longer operate in a cost effective manner.

You cannot believe how tired I grow of trying to open people’s eyes to these things. It saps the vitality out of me, and turns me into a grumpy and disgruntled old man. Yet the consequences of me not trying are something I care not to consider.

You see, I understand the consequences of continuing on the path we currently are on. Most Americans, on the other hand, are happy to continue on doing what they’ve been doing; hoping for things to get better.

Hope isn’t going to cut it people. If you want to make a change, make America truly great again, you are going to have to stop placing all your hope in the people you elect and start learning why our government was created, and then demand that those you elect stick within those limits.

Otherwise, you too will one day see the consequences of your ignorance and apathy…