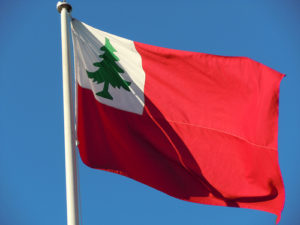 Years before the Son’s of Liberty would disguise themselves as Native American Indians and dump 342 chests of the British East India’s tea into Boston Harbor, a little known event occurred in New Hampshire that, unfortunately, our schools do not teach about; The Pine Tree Riot. Had I not been such an avid reader of fiction novels, I myself probably would never have heard about it had I not bought Brad Thor’s novel, Hidden Order, where a brief synopsis of what happened is mentioned. However, that brief synopsis was enough to pique my interest, and I went in search of more information regarding this little known event.

One of the reasons Britain was able to maintain and protect its empire was its naval superiority. Yet to build these ships of war required lumber, lots of lumber. Every time a ship set sail it required a minimum of 23 masts of varying lengths; which means lots of trees were cut down to build their fleet. After time, Britain began suffering from deforestation and started looking to other countries to supply their need for lumber; and the Colonies seemed like as good a place as any.

The White Pines found in New Hampshire were not as hard as their cousins in England, but they retained their resin longer; by as much as two years; extending the life of the ship. They also grew taller here in America for some reason; making them perfect for single-stick masts and booms.

To ensure that a ready supply of trees remained to use for the King’s Navy, a law was passed in 1722 by the New Hampshire General Court which made it a crime to cut down any White Pine with a diameter of 12 inches or greater. Surveyors of the Kings Woods would go out into the forests and mark those trees which met those specifications with a broad arrow; labeling them as property of the Crown, and not to be cut down for private use. Those found guilty of violating the law could be fined anywhere from £5 to £50; a hefty fine, especially in 1722. Not only did it become a crime to cut down any of the marked trees, a license was now required to cut down any White Pine; a license that came with a hefty price as well.

However, all that changed in 1766 with the appointment of John Wentworth to the governorship. Wentworth was a former surveyor himself, and realized to revenue potential of requiring licenses and fines and hired deputies to enforce the law. He took the enforcement of the law so seriously that he had his driver take him from lumber mill to lumber mill so he could inspect them himself.

It was on one such inspection that a Deputy Surveyor, John Sherburn, discovered 270 mast ready logs were found to have been cut down illegally and were awaiting milling at Clement’s Mill in South Weare. These trees had been cut down by loggers in and around the cities of Goffstown and Weare, and the names of the offenders were published in an issue of the New Hampshire Gazette, calling them notorious offenders and saying warrants had been issued for their arrest.

The mill owners hired a lawyer, Samuel Blodgett, to represent them in court. However, Blodgett must have been one shifty character, because when he met with Governor Wentworth, the governor offered him the job of Surveyor of the King’s Woods…and he not only accepted, he also remained under hire as the lawyer for the defendants.

Sheriff Benjamin Whiting, of Hollis, New Hampshire and his deputy, John Quigley, of Francestown, were given the task of delivering the warrants and making the arrests in the name of the King. Upon arriving in Weare, they found ‘major offender’ Ebenezer Mudgett and arrested him; only to have him released upon the promise that he would return the following day to pay his fine. The sheriff and his deputy then checked in to an inn owned by Aaron Quimby; the Pine Tree Tavern for a nights rest.

Well, Mudgett did return the following day, but not to pay his fine. The evening of his release many of the townspeople gathered at the home of Mr. Mudgett to discuss what to do. Some wanted to help pay his fine, while others wanted to run the sheriff out of town. The hotter heads prevailed. So, the next morning Mudgett, along with 30-40 men, whose faces had been blackened by soot, marched to the Quimby’s Inn, located the sheriff’s room and proceeded to assault him.

According to some accounts, Mudgett and his conspirators burst into Whiting’s room, whereupon he attempted to grab his pistols. However the intruders were quicker and they grabbed hold of him, two men per side, and with his face to the ground they beat him across his bare back, one lash with a tree switch for each tree he was accused of cutting down illegally; figuratively closing out his account to the King’s surveyors on the sheriff’s back.

By Whiting’s own account, he reported later that “They almost killed me.” After giving the deputy similar treatment they then proceeded to cut the ears off their horses, shave their manes and tails, and make the sheriff and his deputy ride them out of town to the jeers of the townspeople.

The sheriff and his deputy then contacted Colonel Moore of Bedford, and Edward Goldsone Lutwyche of Merrimack to organize a posse to arrest those guilty of assaulting the sheriff and his deputy. Upon returning to Weare, most of the townspeople had fled. Evenutally, one of the offenders was found, and the others identified and they were ordered to appear in court on charges of rioting, disturbing the peace, and assault upon the body of Benjamin Whiting.

In September the case was heard in Superior Court, located in Amerst, by four judges; Theodore Atkinson, Meshech Weare, Leverett Hubbard and William Parker. The defendants pleaded guilty and were ordered to pay the meager fine of 20 Shillings each; far less than the fine levied against them for illegally cutting down the marked White Pines.

The judges, most likely, sided with those charged and therefore levied a token fine to appease their sense of justice, and as a slap in the face to the King and those who would enforce his laws upon the people. Whatever their reason, their leniency may have been at the root of many future events where the Colonists took their anger out on the King in the form of, sometimes, violent or destructive protests; such as the Boston Tea Party.

Thus ended the Pine Tree Riot; the first physical manifestation of outrage felt by the Colonists over the laws passed by agents of the Crown which they felt were unjust and tyrannical. You have to remember, all this occurred almost 50 years before Parliament passed the Stamp Act; that act which many believe to be the spark which eventually led to the American Revolution.

And the funny thing is, had I not picked up a copy of Thor’s book Hidden Agenda, I would never have heard about the Pine Tree Riot.