When Facts No Longer Matter 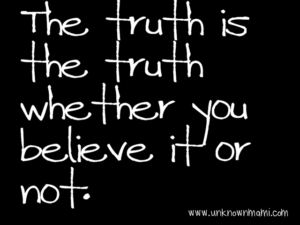 I know this is a hell of a way to begin an article, but my father used to tell me that opinions are like assholes; everyone has one and they all stink. That was just one of the many, as I’ve taken to calling them, Donald-isms my father used to repeat over and over again. Just for the sake of seeing what the internet had to say, I did a web search for the definition of the word opinion. This is the first result that popped up: “a view or judgment formed about something, not necessarily based on fact or knowledge.”

No truer words could ever have been spoken; especially as it pertains to people’s political opinions in modern day America. The other day someone said something in response to a post I put on Facebook that has been eating away at me. This individual said, “I know your intentions are good, skewed, but good.” I wasn’t angry when he said this; at least not right away; but the more I thought about it the more it began bothering me.

In response to that comment I asked that this individual clarify what he meant by those comments; how were my intentions skewed? Are they skewed because what I believe in regards to the purpose and function of government is so vastly different from what the rest of the general public believes? Are they skewed because they differ from the beliefs held by the very men who participated in achieving independence from Britain and forming our system of government?

I have yet to receive an answer in response to my query. This is not an isolated incident; on numerous occasions people have said things and I’ve asked them to provide evidence to support their opinions. More often than not I’m met with dead silence in response.

I don’t know, is it wrong to expect people who have outspoken opinions to be able to provide evidence which supports those opinions? Or, are the opinions held by many not based upon fact; rather they are emotional responses to a subject?

What good is the truth when nobody pays any attention to it? What good are facts and evidence when, apparently, people’s feelings are more important? One of the definitions for truth states, “That which is true or in accordance with fact or reality.” If something is not true, then what is it? Why, it is a lie. Isn’t it just a tad bit hypocritical that so many people in this complain so much during election cycles when the various candidates are caught lying to them; yet these same people continue to repeat the lies they have been indoctrinated to believe in regards to our nation’s history and its system of government?

If being told the truth matters so much to them, why do most reject it when someone presents certain truths which contradict their existing opinions or beliefs?

Are my intentions, my opinions skewed simply because they are not shared by a majority of the people in America? If skewed means slightly different, or outside the mainstream train of thought, then I will accept that as a compliment; as it means I have not fallen for the brainwashing and indoctrination that keeps everyone else from seeing the truth.

In December of 1948 the United Nations adopted the Universal Declaration of Human Rights. Right No. 19 declares, “Everyone has the right to freedom of opinion and expression; this right includes freedom to hold opinions without interference and to seek, receive and impart information and ideas through any media and regardless of frontiers.”

This is somewhat similar to our First Amendment which protects our freedom of speech. But these rights are reciprocal; that is they are a two way street. You have the right to express your opinion and to speak your mind. I, on the other hand have the right to say that your opinions are a crock of manure because there is no factual evidence to support them.

Unfortunately there are a lot of people in this country who are doing just that; voicing opinions that have no basis in fact. And what is ignorance if it is not the lack of knowledge regarding a particular subject?

Way back in the period which saw our country become an independent nation Samuel Adams said something that may as well have been written today, “Mankind are governed more by their feelings than by reason.” How do you explain away the fact that a great many people refuse to consider mountains of evidence which prove their opinions wrong?

Back in 1980 Isaac Asimov wrote a column which appeared in Newsweek Magazine in which he said, “There is a cult of ignorance in the United States, and there always has been. …nurtured by the false notion that democracy means that my ignorance is just as good as your knowledge.” How can one who deals only with facts combat those whose opinions are based upon emotion rather than the study of facts and evidence? Quite simply, you can’t; it is a losing proposition.

If people choose to remain in their cocoons of ignorance, that’s fine by me. But do not expect me to do the same; the quest for the truth is my ultimate goal, and I’m more than willing to alter my opinions based upon the evidence I encounter along this journey.

In closing I’d like to leave you with the immortal words of Patrick Henry, which also happen to echo my own sentiments today, “The question before the House is one of awful moment to this country. For my own part, I consider it as nothing less than a question of freedom or slavery; and in proportion to the magnitude of the subject ought to be the freedom of the debate. It is only in this way that we can hope to arrive at truth, and fulfil the great responsibility which we hold to God and our country. Should I keep back my opinions at such a time, through fear of giving offence, I should consider myself as guilty of treason towards my country, and of an act of disloyalty toward the majesty of heaven, which I revere above all earthly kings.

Mr. President, it is natural to man to indulge in the illusions of hope. We are apt to shut our eyes against a painful truth, and listen to the song of that siren till she transforms us into beasts. Is this the part of wise men, engaged in a great and arduous struggle for liberty? Are we disposed to be of the number of those who, having eyes, see not, and, having ears, hear not, the things which so nearly concern their temporal salvation? For my part, whatever anguish of spirit it may cost, I am willing to know the whole truth; to know the worst, and to provide for it.”

But that’s just me, and apparently my opinions and intentions are skewed…