Tyranny Is Alive and Well In the US of A

I’m relatively certain that everyone realizes that when you break the law there is a penalty attached which you may have to pay if you are caught breaking the law to which the penalty is attached. This is true no matter if the law you break is a simple parking violation all the way up to first degree murder; the only difference is the severity of the penalty.

You may not agree with me on this, but the purpose of any justice system, especially OUR justice system, is to ensure that all are treated equally and fairly under the law, and to ensure that our rights are duly respected and protected. Bouvier’s Dictionary of Law defines justice as: The constant and perpetual disposition to render every man his due.

Now, based upon the writings of those who established our Republic all those years ago, each of us is endowed with certain unalienable rights, granted to us by our Creator. These rights are ours by virtue of us being human beings; they are not gifts or privileges granted us by our government. This is easily provable as at one point in time our government did not exist, and does this therefore mean that because government did not exist that those who lived BEFORE government had no rights?

Therefore, for a government to be just, for it to provide justice, it must strive to protect the rights of the people it governs. After all, that is one of the purposes for which our government was established. If you don’t believe me, just do a quick check of the Preamble to our Constitution and you’ll find that it states that two of the purposes for which our Constitution was written was to establish justice and secure the blessings of liberty to those who wrote it, and those who would follow in future generations; and what is liberty but the ability of the people to exercise their God-given rights.

Therefore, for any law to be just, for it to provide justice, it must seek either to protect the rights of the people, or to punish those who violate the rights of another. Any law passed which seeks to limit or restrict the ability of people to exercise their rights is therefore unjust, or in other words, unconstitutional; as it violates the spirit and intent for which our Constitution was written.

In 1850 Frederic Bastiat wrote the following, (and I want you to read and ponder it carefully), “What, then, is law? It is the collective organization of the individual right to lawful defense.

If every person has the right to defend—even by force—his person, his liberty, and his property, then it follows that a group of men have the right to organize and support a common force to protect these rights constantly. Thus the principle of collective right—its reason for existing, its lawfulness—is based on individual right. And the common force that protects this collective right cannot logically have any other purpose or any other mission than that for which it acts as a substitute.”

It is clear, therefore, that the purpose of law is threefold; to protect our lives, our liberty, and our property. Does it not make sense then that any law which serves an ulterior purpose is therefore unjust? If a law unjustly deprives a person of their life, their liberty, or their property, then the law itself becomes, as Jefferson said, the tyrants will.

Now I want to ask you a couple quick questions, and I hope you will think about your answers before you just blurt out an answer, and that you answer them honestly.

Question: Do you agree that those whose job it is to provide justice have the right to use force, even deadly force, to compel obedience to the law?

Question: Do you believe that our Constitution is, in fact, the Supreme Law of the Land?

You have to realize that the Constitution is nothing but a grant of power from the true sovereigns in a nation, (the people) to a government. Our Constitution clearly outlines the shape our government shall take, the specific duties of each branch, and the specific powers given to government as an entity to act on our behalf. It also has additional amendments which list certain rights which the government CANNOT, under any circumstance, pass laws to restrict.

Therefore, for our government to be just it must confine itself to the powers given it and it must ensure that each branch does not seek to usurp powers held by the other branches. In 1785 James Madison stated the following, “The preservation of a free government requires, not merely that the metes and bounds which separate each department of power be invariably maintained, but more especially that neither of them be suffered to overleap the great barrier which defends the rights of the people.”

That is the criteria one should use when determining if their government is just or unjust; whether it is constitutional or unconstitutional. Not whether it provides things for you which the Constitution does not authorize it to, but whether each branch confines itself to its specific functions, and that it seeks to protect the rights of EVERY person living in the nation.

In 1788 Alexander Hamilton wrote, “It is essential to the idea of a law, that it be attended with a sanction; or, in other words, a penalty or punishment for disobedience.” Yes, I know Hamilton was referring to the power of government to impose sanctions upon the States to compel their obedience to the laws it passes, but the principle remains the same whether the law in question was written by government to control the actions of the people, or written by the people to control the actions of their government.

So in what Article and Clause in the Constitution can one find the sanctions, or penalties, for those who violate it? You can either look for yourself, or you can take my word for it; there are none. Did you hear me, there are NONE; there is no mention made of how to punish those who violate the Supreme Law of the Land.

I want you to think about this, SWAT can kick in your door, subdue you, and search your home based solely upon their suspicions that you may be guilty of violating any of the myriad laws which government has passed which say what is and is not legal for us to do. Yet were 50 heavily armed men barge into Congress, based upon legitimate concern that what Congress was doing overstepped its legal authority, how would you personally react? I’m pretty sure I could guess; you’d be outraged and call them lawbreakers or terrorists.

Even if you didn’t, even if you felt that the people have the right to hold those they elect accountable for violating the Constitution, what judge, what prosecutor would try them for their crimes? And yet you tell me we have justice in America? If that’s the case, I’d sure like to see some of it imposed upon those who take an oath to support and defend the Constitution, only to turn around and ignore the limits it imposes upon their actions.

This is a non-partisan issue; the violations of our Constitution and the infringements upon our rights are committed by both sides of the political spectrum. Yet the people of this country often turn their heads when their party is guilty of these crimes, then turn around and get up on their soapbox, all high and mighty with righteous indignation when the ‘other’ party commits the very same offenses. Where is the consistency, the integrity when it is okay for the law to be broken simply because it is your party which is breaking it? Where do you see justice for those whose liberty and/or property are taken from them due to the unjust laws your government enacts?

Try answering that, and then justifying your continued support of government; in the same sentence if you can.

Before George Washington placed his hand upon a Bible and repeated the oath of office to become the first president under our Constitution, there were those who foresaw the dangers this Constitution posed to us and our liberty. They saw the flaws contained within the document and how it provided us with no true means to defend against those who would violate it.

On June 7, 1788 Patrick Henry argued to the Virginia delegates to the Ratifying Assembly, “Where is the responsibility — that leading principle in the British government? In that government a punishment, certain and inevitable, is provided: But in this, there is no real actual punishment for the grossest maladministration. They may go without punishment, though they commit the most outrageous violation on our immunities. That paper may tell me they will be punished. I ask, by what law? They must make the law — for there is no existing law to do it. What — will they make a law to punish themselves? This, Sir, is my great objection to the Constitution, that there is no true responsibility — and that the preservation of our liberty depends on the single chance of men being virtuous enough to make laws to punish themselves.”

He was certainly right in his fears, there are no laws by which we can punish even the grossest of violations of the Constitution; and those we elect certainly haven’t taken any measures to censure and limit their own power and authority; in fact the reverse is true.

Henry’s fears can best be summed up by something he’d said two days prior, “My great objection to this Government is, that it does not leave us the means of defending our rights, or of waging war against tyrants.”

You might say, “But Neal, we don’t have tyranny in America.” To which I will reply, “That is because you do not understand what tyranny is.” Tyranny is not a bunch of jack booted thugs marching around demanding to see your papers; tyranny is the unjust or unlawful use of power to subdue and subjugate the people. And I tell you we do have tyranny in this country; it is only that people do not care because it comes cloaked in the colors of established political party ideology, aided and abetted by the complete and total ignorance of the people when it comes to the purposes for which their government was established.

After all, Blather Myles was right, it makes no difference whether we are governed by, “…one tyrant three thousand miles away or by three thousand tyrants one mile away?” Tyranny is tyranny, and the sooner you wake up to the fact that it is alive and well in America, and that by your continued support of the entity you call government is only granting your consent to be tyrannized. 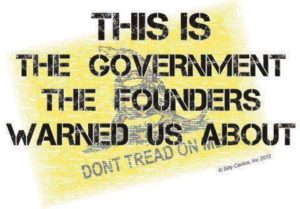