Invasion of the Liberty Snatchers 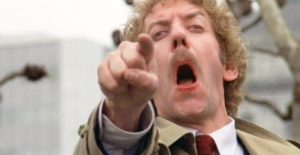 The premise of the film is that alien seeds land on Earth and go on to produce pods that are capable of producing exact replicas of humans; which then take the place of the person they duplicated. From all outward appearances these replicas look and sound just like the person they replaced; except that they are devoid of emotion.

In the 1978 remake, the last scene of the film shows Veronica Cartwright walking hesitantly down the street and she sees Donald Sutherland. Thinking he had escaped being replaced by a pod version of himself, she hesitantly approaches him, but then he lets out this scream that lets the other duplicates know that a ‘real’ human is among them. The look of abject horror on Cartwright’s face is what I imagine people would feel if they were to be forced to face the fact that every single thing they had ever been taught; all that they believe about their government was a lie.

I don’t know, there is something about movies like Invasion of the Body Snatchers and the Matrix that speak to me in ways they don’t speak to others who watch them. Both these movies depict societies that have been transformed into versions of themselves that, from all outward appearances, look normal; but then when you discover the truth, they are anything but normal. Films like that, at least for me, are powerful analogies for how I view real life here in America.

Americans, well most of them anyways, live in a dream world where they believe they are free and that we have free and open elections where their votes elect people who will then go on to this thing called government and represent them. The truth is that our votes don’t matter; that no matter who we elect this thing we call government is going to continue to grow in power, borrow more money, and deprive us of more of what remains of our freedom.

Let me ask you to do a simple exercise. Open your wallet or purse and pull out one of those bills you use to buy things. It doesn’t matter if it is a $1 bill or a $20, just pull one out. Now what is it that gives that piece of paper and cotton any value? It is only your faith, or belief that it holds any value that allows you to take that into a store and exchange it for goods or services. Without the faith of the people behind their currency system, the entire system would collapse.

Such is our government. Our Declaration of Independence says that government derives its power from the consent of the governed. In the 2001 remake of the film Clash of the Titans, the gods talk of how they derive their power from the prayers of man, and that since man has stopped praying to them, they have grown weaker. Government, at least a government in which the people believe represents them, is much the same; it derives its power only because we put our faith and trust into it. If you were to take that faith and trust away, government would lose all its power over us.

Can you imagine the damage to government that would occur if every single one of the 300 plus million people in this country refused to pay their taxes anymore? Can you imagine the terror those in Washington D.C. would feel if the entire population of Virginia and Maryland one day decided to march into our nation’s capital; carrying pitchforks, axes and nooses and guns?

I speak a lot, no, that’s not right, I harp all the time about ignorance; but ignorance is a disease that protects those in power from the wrath of those who they were sent to our government to represent; but have long since betrayed.

For a brief period in American history, the people of this country enjoyed true freedom and liberty. Under the rule of a monarch there were those who got an inkling of what it meant to be free, and they wrote a document which explained their beliefs on freedom and the nature of government. They then found the courage within themselves to go out and fight to obtain that freedom.

However, as I myself have found, people’s attention spans and memories are about the length of a 30 second advertisement on TV; and those who had fought a war to gain their freedom turned around and ratified a document which opened the doorway to the enslavement of future generations; and yes, I’m talking about the Constitution.

What people have to realize is that power, and those who hold it, is always of an expanding nature; it is almost like a virus that spreads and consumes all that is in its path. There is a quote I’ve read that I’ve been unable to find the source for, but nonetheless bears some attention. It states, “Nearly all men can stand adversity, but if you want to test a man’s character, give him power.”

But political power, especially delegated political power, such as we have in America, cannot suddenly and drastically expand without those who have delegated it rising up in protest. No, it must occur in small increments over an extended period of time. In that, it is almost like the process of aging. You would be shocked if you went to bed one evening looking like the average teenager, then awoke to look like you had aged 60 yrs overnight. But the slow gradual process of aging goes much more un-noticed than the sudden appearance of wrinkles and all the things that come with old age.

Government is the same; it chips away a little bit at one of your freedoms here, and then goes on and chips away at another one over there, only to return later to chip away some more at the other one; in a never ending cycle. It does so that you don’t notice its ultimate goal is to take away ALL your freedom. It’s the same with taxes; government imposes a relatively small tax here, and then goes on and imposes another small tax upon something else; while people never see the cumulative effect of all these taxes. I’ve always said that if people paid no taxes on anything throughout the year, then on December 31st had to write a check to Uncle Sam for all the taxes they owed, they’d be on a plane to D.C. the next day to help overthrow the government.

But people, it seems, like to believe in illusion and fairy tales; that is the only explanation I can find which justifies their continuing to support, and continuing to put their trust and faith in a government that clearly has exceeded its delegated powers and has deprived the very people who vote for its members the liberty it was established to safeguard and defend.

Patrick Henry tried to warn people, at least those in Virginia, of the dangers this constitution posed to their liberty; but they refused to listen; much like people refuse to give any credence to the things I write today, I might add. Henry warned that if the people ratified the proposed Constitution that the States would lose their sovereignty; and they have. He warned that this Constitution provides those who cherished their liberty no means of defending it against the government the Constitution establishes; and it hasn’t.

Now the Constitution itself is irrelevant, leaving people divided along political party ideologies; and people STILL believe that our system of government is just chugging along in the manner in which it was intended. How obvious must the truth become before people will see it?

While pondering how to format the things I wanted to say in this commentary, a thought came to mind. That thought being, “If ignorance and apathy were terminal diseases, most Americans would be lying in hospital beds hooked up to life support systems.”

Ignorance and apathy are so rampant in America that if there was any sanity to the world, a state of national emergency would have been called to combat them. American’s priorities are bass ackwards; just go up to any American on a Monday morning during football season and try asking them questions of a political nature.

I realize that people have been educated, (I prefer to use the terms indoctrinated or programmed), to believe that America has a democracy, and that our government is doing the things that it was established to do; but a person of strong mind and strong moral character would accept the fact that things aren’t what they seem if they were presented with enough evidence to prove that to be the case.

Not Americans, not right now anyways. They go on believing in the system; putting their trust and faith into it in the hopes that just the right candidate will come along with all the answers and solve all their problems. If it weren’t so scary, it would be pathetic.

It’s like Morpheus tells Neo in the Matrix, “You have to understand, most of these people are not ready to be unplugged. And many of them are so inured, so hopelessly dependent on the system, that they will fight to protect it.”

The truth is out there people; if you want to go out and find it. It may be hidden in bits and pieces, but it is out there; all you have to do is be willing to look for it. Well that’s not exactly true, you also have to have the mental capacity to distinguish the truth from all the lies that are out there as well; and you can only develop that by using that old grey matter between your ears; something most Americans are loathe to do.

As Thomas Edison is attributed with saying, “Five percent of the people think; ten percent, think they think; and eighty-five percent would rather die than think.” Most prefer the comfort that comes with believing in lies and false security over the risks they face when they go out in seek of the truth. But I’ve always been somewhat of a rebel and a daredevil; so I suppose it comes as no surprise that I chose to seek out the truth.

But if liberty and freedom truly mean anything to you, I suggest you develop a little bit of courage and a whole lot of motivation, and go out and look for it yourself…before it’s too late, if it isn’t too late already that is.