Could You Pass Neal’s Civics Test? 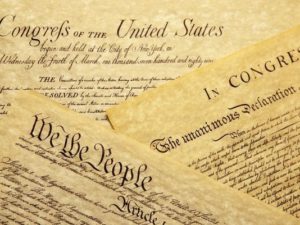 Are you aware that the right of suffrage, or of voting for you laymen, is not specifically guaranteed to anyone by the Constitution and Bill of Rights? The closest the Constitution comes to specifically mentioning voting is in Article 1, Section 2, “The House of Representatives shall be composed of Members chosen every second Year by the People of the several States, and the Electors in each State shall have the Qualifications requisite for Electors of the most numerous Branch of the State Legislature.”

Then, in the 12th Amendment, it again mentions electors when they change the manner in which the President and Vice-President are elected. The first time voting is specifically mentioned comes, ironically, in an amendment which was never legally ratified; the 14th Amendment. It is again mentioned in the 15th, 19th, 24th and 26th amendments; further expanding the right to every citizen, over the age of 18 who is not serving time in prison or on parole.

Prior to the Constitution being amended, it was left to the States to decide for themselves which of their citizens would be allowed to vote in an election. Typically, in the early years of our nation, most States only allowed white adult male property owners to vote. The succeeding amendments to the Constitution extended voting rights to blacks, women, and they even lowered the age at which one became eligible to vote to 18.

While you may disagree with me, I believe those who drafted the Constitution were wise when they did not specifically make voting a protected right for all citizens; such as they did with freedom of speech, or the right to keep and bear arms. I also believe it was wise that they did not extend voting privileges to everyone. While I disagree with not allowing women or blacks to vote, I do believe there was a certain amount of wisdom in not giving the vote to every Tom, Dick and Harry in America. I believe, and current events tend to support the position that not everyone is educated enough on our system of government, and therefore should not be allowed to choose those who fill the seats of power within it.

I know he is not a political scientist or philosopher, but science fiction writer Robert Heinlein once made a very telling statement about voting, “The America of my time line is a laboratory example of what can happen to democracies, what has eventually happened to all perfect democracies throughout all histories. A perfect democracy, a ‘warm body’ democracy in which every adult may vote and all votes count equally, has no internal feedback for self-correction. It depends solely on the wisdom and self-restraint of citizens… which is opposed by the folly and lack of self-restraint of other citizens.”

James Madison, the so-called Father of our Constitution, once said, “Knowledge will forever govern ignorance; and a people who mean to be their own governors must arm themselves with the power which knowledge gives.” Although we do not directly govern ourselves, as is implied by Madison’s words, we do select those to govern in our stead; and if we are not informed, or if we place our own selfish desires above the law which establishes our government, then does it come as any surprise that our government has become just as corrupt, if not more so, than those who chose the people that occupy positions of power within it?

Noah Webster once made the following comments as a warning to those who were given the privilege of voting for others to represent them in government, “When you become entitled to exercise the right of voting for public officers, let it be impressed on your mind that God commands you to choose for rulers, ‘just men who will rule in the fear of God.’ The preservation of [our] government depends on the faithful discharge of this Duty; if the citizens neglect their Duty and place unprincipled men in office, the government will soon be corrupted; laws will be made, not for the public good so much as for selfish or local purposes; corrupt or incompetent men will be appointed to execute the Laws; the public revenues will be squandered on unworthy men; and the rights of the citizen will be violated or disregarded. If [our] government fails to secure public prosperity and happiness, it must be because the citizens neglect the Divine Commands, and elect bad men to make and administer the Laws.”

I’m just one pissant out of over 320 million other pissants and my opinion means nothing in the grand scheme of things, but I would like to put forth an idea that I have held for quite some time now. My idea has, as its origin, another quote from Noah Webster which states, “But every child in America should be acquainted with his own country. He should read books that furnish him with ideas that will be useful to him in life and practice. As soon as he opens his lips, he should rehearse the history of his own country; he should lisp the praise of liberty, and of those illustrious heroes and statesmen, who have wrought a revolution in her favor.

A selection of essays, respecting the settlement and geography of America; the history of the late revolution and of the most remarkable characters and events that distinguished it, and a compendium of the principles of the federal and provincial governments, should be the principal school book in the United States. These are interesting objects to every man; they call home the minds of youth and fix them upon the interests of their own country, and they assist in forming attachments to it, as well as in enlarging the understanding.”

I believe that the privilege of voting in elections should be based upon the successful completion of a course of study on American History and our system of government. This course of study would not be a single semester or school year, such as it was when I made my way through the Public Fool System. Rather, my recommendation is that our children begin their educations at a much earlier age and it continues all the way through high school; whereupon they would be required to pass a comprehensive exam which tested their understanding of history and our system of government. If they failed, they would not be permitted to vote in any election until they could prove that they had become sufficiently informed as to make sound choices when voting.

I can almost hear people’s thoughts now, “How dare Neal suggest that I become informed before I am allowed to vote!” Don’t you have to prove that you know the rules of the road before you are given a license to drive a motor vehicle? Don’t some of you believe that before a person may purchase a firearm they be required to successfully pass some kind of safe handling course? Why shouldn’t you prove that you know the law of the land before you are allowed to vote? Or, does your hypocrisy know no limits?

It is with that thought in mind that I have made up a simple short history/civics test for you. This is just an example of the kinds of questions I would like to see people be able to answer correctly before they are given the right to vote. If I had my way I would like to see a 100 question test, primarily made up of questions that require essay answers and with no multiple choice questions, along with a minimum 2,500 word essay on what it means to be an American. These are the requirements I would like to see put into place before anyone be allowed to vote. I’m betting that the number of people who vote in any election would drop drastically if these ideas were put into place; as most people would not be able to successfully pass.

Anyway, here are but 10 questions I would like for you to try and answer. I don’t require you to let me know how you did, but I would hope that if you cannot answer them all, then you take some time to learn a bit more about our system of government and how it is SUPPOSED to work.

1) Define sovereignty, and explain who holds it.

2) What is a constitution?

3) Why did those who drafted our Constitution establish a bicameral Congress?

4) Explain the difference between a democracy and a republic.

5) Explain the difference between a federal form of government and a national one.

6) Explain the functions of each branch of our government.

7) How many powers are specifically mentioned as being those given our government; name 5 of them.

8) Explain where our rights come from and the difference between a right and a privilege.

9) Using the original intent of those who drafted the Constitution, explain what is meant by the phrase, the General Welfare.

10) The First Amendment guarantees the people the right to petition their government for a redress of grievances. Explain what this means, and describe the various forms of recourse the people have when their grievance is against government itself.

Well, how did you do? Remember, this is only a small example of the type of questions I would like to see people be required to successfully prove they know the answers to before they be allowed to vote; oh, and a passing grade is 100%.

So, using that as a guideline, would you be allowed to vote in the next election, and if not, what are you going to do about remedying your ignorance?