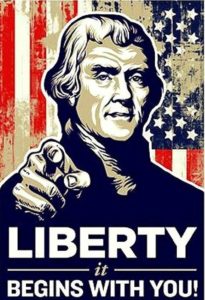 When anyone mentions the word liberty I am torn between a sense of overwhelming grief and anger. I feel grief because we do not have liberty in this country; not anymore that is. I feel anger because the preservation of their liberty is at the bottom of most people’s list of priorities. Not only that, but were you to ask the average person what liberty was, they would not give you the correct definition.

Black’s Dictionary of Law defines it as: Freedom; exemption from extraneous control. The power of the will, in its moral freedom, to follow the dictates of its unrestricted choice, and to direct the external acts of the individual without restraint, coercion, or control from other persons.
Bouvier’s Dictionary of Law provides this definition: Freedom from restraint. The power of acting as one thinks fit, without any restraint or control, except from the laws of nature.

Using either of those definitions, how many of you would still proclaim that liberty exists in abundance here in America right now? Yet our country was founded upon the principle of individual liberty; it is what our Founders sought when they declared their independence from England. Sure, they fought for their independence, but liberty was what they were after.

John Hancock, that fellow who signed the Declaration of Independence in huge scrawling letters so that King George III could not fail to miss it, once said, “We have all one common cause; let it, therefore, be our only contest, who shall most contribute to the security of the liberties of America.”
Patrick Henry, that patriot who stirred the hearts of his countryman towards independence, also said, “I know not what course others may take; but as for me, give me liberty or give me death!”

I would like for you to answer a question; you don’t have to answer me directly, just ponder it for your own benefit. The question is: When you go to the polls to cast your vote for candidates to hold office, is the preservation of your liberty among the reasons why you have decided to vote for a particular candidate? I’m betting that the answer, at least for most people, is no.

I wonder, do people actually think that liberty simply exists, just like the air that we breathe; that it is always there and can never be taken from us? If that is the case, then why would Thomas Paine make the following comment, “Those who expect to reap the blessings of freedom, must, like men, undergo the fatigue of supporting it.”?

This country has a statue, sitting in New York Harbor, given to it by the people of France, which is dedicated to liberty. We have a patriotic song which sings its praises; My Country Tis of Thee. It is written into our Founding Documents as the preservation of it is what governments are instituted to protect. It was the underlying cause for which every single soldier, sailor, airman and marine who gave up their lives for their country was defending.

Why then do people care so little that it simply does not exist to the full extent our Founders had hoped it would when they established America as a free and independent nation; at the cost of their wealth, and sometimes their lives?

When Nathan Hale was led to the gallows for treason against the Crown, he declared, “I regret that I have but one life to give for my country.” What Hale was dying for was the belief that America could become a land where liberty flourished. How many of you would die to preserve liberty in America? How many of you would rather see liberty restricted as long as you were safe and sound within your homes, and you had a job that provided you with enough funds to provide you with food and your favorite means of entertainment?

Liberty is more than just the ability to exercise our rights; although that certainly is part of what liberty is. Liberty is the ability to chart your own course in life without anyone telling you what to do, or depriving you of the success you might achieve. Can you honestly say that you enjoy full liberty when you are taxed to fund programs and wars that the Constitution does not authorize?

Where is this liberty everyone seems to believe exists; I want to see it for myself!

The problem with most people is that they look to the very people who have deprived them of their liberty to restore it. Let me tell you something, you’d have more luck getting a thief to give you back something they stole than you would asking your government to restore the liberty it has deprived you of. So why do you still support it when any thinking person can see that government no longer cares about preserving your liberty; and hasn’t for quite some time?

Liberty is not a tangible item that you can reach out and touch, it is something one must experience for themselves; and defend against all those who would encroach upon it. Liberty is a state of mind, not a state of existence granted you by the good graces and mercy of your government. Let me tell you a little secret you may not like; if you want liberty, you may have to get your hands dirty fighting to defend it.

Liberty is not found in your local supermarket or convenience store; it is not found in old parchments or speeches written by people who have been dead for hundreds of years. In 1944 Judge Learned Hand delivered a speech dedicated to the Spirit of Liberty, in which he states, “What do we mean when we say that first of all we seek liberty? I often wonder whether we do not rest our hopes too much upon constitutions, upon laws, and upon courts. These are false hopes; believe me, these are false hopes.

When I leave my home and enter into the teeming mass of society, I am always wondering to myself what thoughts are passing through the minds of the people I see. I always ask myself if the preservation of their liberty is among the jumbled mass of thoughts inside their heads; and from the conversations I’ve had with some of them, I’ve come to the conclusion that liberty is the last thing on most people’s minds.

And that right there is the problem in America in a nutshell.

One final thought for you. In 1775 John Adams wrote a letter to his wife in which he stated, “But a Constitution of Government once changed from Freedom, can never be restored. Liberty once lost is lost forever.”

If liberty means anything to you, I have some bad news for you; you aren’t going to find it at the voting booth at this stage in the game. For too long we have chosen for us leaders who sought not to preserve our liberty, but those who promised us goodies to keep us from thinking about how they have been depriving us of the liberty they were supposed to be safeguarding for us.

If we want liberty, we’re gonna have to do as our Founders did; fight for it. As Jefferson said, “The tree of liberty must be refreshed from time to time with the blood of patriots and tyrants.” Well, a lot of patriots have had their blood spilled defending liberty, maybe the problem is that the blood of tyrants has not been added to the mix.

I know that words like that frighten and offend some of you, but remember this; John Adams once wrote, “The right of a nation to kill a tyrant, in cases of necessity, can no more be doubted, than to hang a robber, or kill a flea. But killing one tyrant only makes way for worse, unless the people have sense, spirit and honesty enough to establish and support a constitution guarded at all points against the tyranny of the one, the few, and the many.”

And if there ever was a time for the words of Samuel Adams, it is now:

If ye love wealth greater than liberty, the tranquility of servitude greater than the animating contest for freedom, go home from us in peace. We seek not your counsel, nor your arms. Crouch down and lick the hand that feeds you; May your chains set lightly upon you, and may posterity forget that ye were our countrymen.