I Don’t Get Offended (I Retaliate With Facts)

There are a lot of things that bother me, but I think it is the belief that someone’s freedom of speech and freedom of expression may be restricted because others find it offensive is right up there towards the top of my list of things that really piss me off. The idea that one person, or group, can deny another the right to express their opinions and beliefs simply because they are too weak minded to handle the things they say causes me to despise; because in truth they are nothing but a bunch of mental cowards.

Freedom, and I’m talking about real freedom here, gives everyone the right to do and say as they please as long as they do not bring harm to another. Yet people today believe that harm implies that their feelings should also be protected from the harsh realities of facts and evidence.

As some of you may already know, I’ve been re-reading the book Atlas Shrugged for the sixth or seventh time. Well I just finished it last night, but throughout that book there are sections where the producers of society are conversing with the looters and moochers and the looters always resort to saying something along the lines of, “Why must you go to such extremes” or “Why do you insist upon such absolutes”.

There is a meme I’ve seen on the internet from time to time that says, “The truth remains the truth even when no one believes it, and a lie remains a lie even though everyone believes it.” That’s the nature of the truth, it remains constant whether or not people believe it or not. It would not alter the truth if the whole world believed that two plus two equals 7, it would still be untrue.

I’m sorry if you find the things I say offensive; I truly am. But that is not MY problem, it’s yours. If your beliefs are so flimsy that the truth threatens them, then maybe you ought to change your beliefs to conform to the facts.

When I began this quest for the truth all those years ago, I had no idea where it would take me and what I would encounter along the way. Make no mistake about it, there were times that I discovered things which threatened everything I believed about our political system, and certain events in our nation’s history. But I did not let my beliefs or feelings get in the way of my quest for the truth. Instead of ignoring uncomfortable facts, I altered my beliefs to conform to the facts I discovered.

That is the proper way of handling the truth; not to avoid it all costs, and denounce those who speak it because you are offended by it. In the grand scheme of things, I am just small potatoes, my beliefs and opinions hardly make a ripple in the current of public sentiment. That said, I can’t believe the negative reactions I get when I attempt to share the truths I’ve discovered with others; it’s almost like I’m threatening the very existence of people.

There is something that people fail to realize about freedom; that being that it is a two way street. If you expect people to respect your freedom to speak then you have to respect their freedom to respond to what you say; even if you don’t like what they are saying. If you can’t do that, then you would be wise to keep your opinions to yourself; especially if the opinions you voice are founded solely upon how you feel about a particular subject.

But that’s the thing about this whole political correctness nonsense; it is not designed to allow for the free and open discussion of ideas; it is designed to promote one side’s belief on the subject under discussion, and anything which contradicts their version is attacked, condemned and the speaker’s right to freely speak their mind is censored.

Look at how the public reacts to Milo Yiannopoulos. Milo is gay and therefore he should have the support of the liberal left in this country because that is one of the causes their party stands for. Yet Milo is hated by the left, and his speeches protested against; sometimes quite violently. Why is that? Well, it’s because Milo speaks the truth about things; the truth that threatens almost everything the liberal left believes in. They despise him, and seek to have his voice silenced. That is because the things he says shoots all their arguments down in flames.

Let me tell you a little secret about those who talk about and practice political correctness; they fear a society that is capable of forming their own opinions without their being able to guide the direction the public conversation is taking. They seek to control the debate by being the sole deciders of what these debating are allowed to say without being censored.

That is not freedom of speech, at least not according to my understanding of it. That is censorship while seeks to silence anyone who voices an opinion which is contradictory to their agenda.

Like I said, if your opinions and beliefs are so weak that you would seek to silence those who threaten them with facts, then maybe you ought to consider changing your beliefs; that is of course unless you like believing lies.

I do not intentionally seek to offend anyone, but if the truth does offend you then there is a saying you had best get used to, “Tough shit!” If your opinions are so flimsy that you are offended by those who have come to an argument armed with facts, then maybe you ought to get off Facebook, stop watching so much TV and start researching your position so that you can better support it in a political debate. Otherwise, suck it up sunshine and get used to having your opinions shot down in flames by those who speak the truth. Crying foul, or saying that you’re offended doesn’t cut it, they aren’t valid arguments. Either support your position with facts, or shut up.

But if you try to take my freedom of speech away, you may as well be trying to take away my guns or be threatening my life; I’m going to fight back with all I have. I’m all for freedom of speech; I’ll even defend it for those who don’t know what the hell they’re talking about. All I ask is that you show me the same respect and allow me to respond to your bullshit with facts.

If you can’t do that, well I guess we’re gonna have issues. 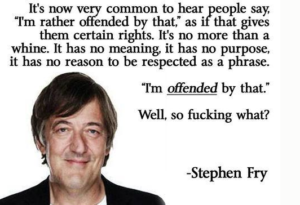