Why Do You Consent To Tyranny? 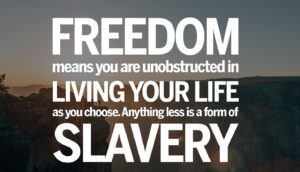 “The only idea they have ever manifested as to what is a government of consent, is this — that it is one to which
everybody must consent, or be shot.”
~Lysander Spooner~

On January 19, 1979 I raised my right hand and swore an oath to support and defend the Constitution of the United States against all enemies, both foreign and domestic. That oath was administered by men, but it was to God that I was swearing it to, and therefore I consider it to be sacredly binding upon me until I breathe my last dying breath.

Some may believe that oath implies that they support our government in all its endeavors, but I’m not one of those who believe that way. I believe that my support for government rests upon the extent to which it adheres strictly to what the Constitution says are its specifically delegated powers.

Our system of government derives its authority from the consent of the people; that is a bedrock principle found in the Declaration of Independence, “…Governments are instituted among Men, deriving their just powers from the consent of the governed…” But that premise is attached to the belief that governments are instituted to secure the rights of Life, Liberty, and the pursuit of Happiness. Therefore, I pose the following question: Are those who are subjected to a government that seeks not to expand the rights of Life and Liberty, but rather to restrict those rights, actually free; or are they slaves?

Thomas Paine once said, “Society in every state is a blessing, but Government, even in its best state, is but a necessary evil; in its worst state an intolerable one: for when we suffer, or are exposed to the same miseries BY A GOVERNMENT, which we might expect in a country WITHOUT GOVERNMENT, our calamity is heightened by reflecting that we furnish the means by which we suffer.”

Our government was given life by the consent of those who ratified the Constitution in 1789. Prior to that it was only a proposal submitted to the people of the various States who were then tasked with deciding whether to adopt this form of government or keep the one established by the Articles of Confederation. Their consent was expressly stated in that the people, or specifically chosen representatives of the people, gathered together and voted to accept the system of government being proposed. From that day forward, all consent for this system of government has been tacit; or assumed.

You see, there is something else Thomas Paine wrote. In his treatise entitled The Rights of Man, Paine states, “There never did, there never will, and there never can, exist a Parliament, or any description of men, or any generation of men, in any country, possessed of the right or the power of binding and controlling posterity to the “end of time,” or of commanding for ever how the world shall be governed, or who shall govern it; and therefore all such clauses, acts or declarations by which the makers of them attempt to do what they have neither the right nor the power to do, nor the power to execute, are in themselves null and void. Every age and generation must be as free to act for itself in all cases as the age and generations which preceded it.”

I don’t recall ever attending any re-ratification assembly and giving my consent for this system of government; do you? Therefore my consent is tacit, or implied by the fact that I do not actively resist it. There is a Latin proverb which states, “Qui tacet consentire videtur, ubi loqui debuit ac potuit”, which roughly translated means, “He who is silent gives his consent.”

That oath I took all those years ago was for the form of government outlined by the Constitution, not the evil and perverted entity most people consent to today. Should any freedom loving individual be required, just because the majority demands it, to support a system of government that seeks to enslave them? Does it matter that a person’s rights are being stripped away by the acts of evil men in power, or whether those rights are being taken away by those in power because a majority demands it? After all, the end result is still the same; the loss of a person’s rights.

I constantly hear people say things like, “You can’t fight Uncle Sam” or “But it’s the law, you have to obey.” Is that so? If our Founders had believed that they would never have risen up and stood against the tyranny of King George and America would not have gained her independence. They were few in numbers in comparison the majority, yet it was by their steadfast devotion to liberty that America became a free and independent nation; regardless of the fact that a good percentage of the people living in America at the time wished to remain British subjects.

You can consent to a system of government that seeks to deprive you of the liberty that it was established to protect; that’s your choice. But you cannot demand that I consent to it as well; as that is a violation of my freedom of choice.

I cannot, and will not consent to slavery. Our Founders chose not to live under an arbitrary ruler who could, at will, violate their rights; even though they were among the minority of the people living in America at the time. The Southern States that seceded from the Union sought to exercise that same prerogative in 1861; but were defeated by the forces of tyranny who sought to compel their obedience by bayonet, musket and cannon.

My biggest problem, when discussing the Civil War, is when people focus far too much on why the South seceded; whether it was over slavery, tariffs, or other reasons. Instead they should be focusing on whether or not they had the right to secede; regardless of the reasons. Does a government, which was created by the voluntary consent of all the States, use force to compel all its members to obey its will; regardless of whether that will violates their rights, or adheres to a strict interpretation of its constitutional authority?

That is the question people should be asking themselves when any discussion of the Civil War arises. If you deny that the South had the right to secede, you are effectively denying that the Colonists had the right to secede from the British Empire; and that’s exactly what the Declaration of Independence was, a joint Declaration of Secession issued by all 13 Colonies to their government.

I think there is something most people haven’t given much thought to; that being that a free individual does not need government for anything. Now they may consent to its existence as long as it does not restrict their freedom; but they don’t NEED it to survive on their own.

Then there are those, be they individuals, groups, or business interests, who seek to use the coercive power of government to enact laws which benefit them at the expense of others. Whether this be groups like the Military Industrial Complex, (whose profits depend upon a constant need for their weapons of war), or Big Pharma, (whose profits would tank if the FDA approved holistic methods of treating disease; such as cancer), or whether it be groups like the gay rights community, the pro abortion community, or the anti-gun lobby who seeks a total ban on privately owned firearms; they all use government as their tool to further their agenda or increase their bottom line.

If you truly love freedom then how can you, in good conscience, consent to a government, (be it run by Democrats OR Republicans) that imposes law after law which regulates and micromanages almost every aspect of your lives; which violates almost every single one of the rights protected by the Bill of Rights; and which imposes tax after tax upon you, all the while shouldering you the responsibility of paying off a $21 trillion national debt? A freedom loving people would NOT consent to such a government; therefore I can only conclude that the love of freedom is dead in America and that people would rather be slaves than freemen and women.

When any government seeks to impose its will beyond what is just, or to benefit one group of people at the expense, or loss of liberty by another, then tyranny exists. It does not matter if that tyranny is hidden under the cloak of ‘the law’, it is still tyranny. Jefferson did, after all, say that law if often but the tyrants will; especially when it violates the right of the individual.

Does it matter that this tyranny exists because the majority consent to it, or demand that it be imposed upon a minority? Does it matter whether the President, or a member of Congress comes to your house and personally demand that you obey the law, of that they send armed government agents or local law enforcement to impose that tyranny upon you? Tyranny is tyranny, no matter who enacts, and who enforces it.

You can consent to government in its current state if you want, or if it is because it is your own personal Republican or Democrat flavor of government, but as long as government exists to benefit others at my expense, or deprive me of my rights because others do not like it when I exercise them, I will NEVER consent to it.