How Well Has Voting Worked Towards Restoring Your Liberty? 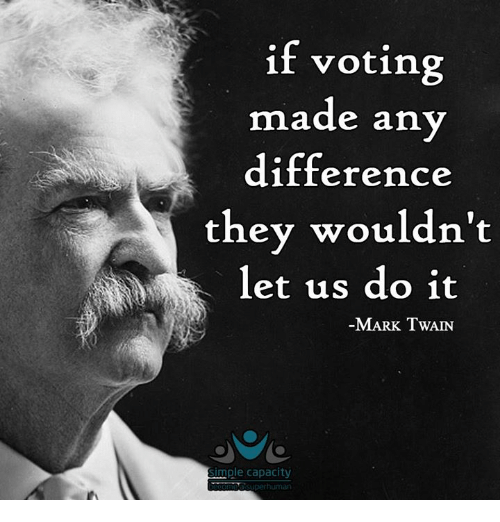 “None are so hopelessly enslaved than those
who falsely believe they are free.”
~Johann Wolfgang von Goethe~

While it might not be explicitly stated, hidden behind every law lies the threat of deadly force for its enforcement. Even something as minor as a ticket for not wearing a seat belt has the use of deadly force behind it if a person refuses to pay, or to surrender themselves into custody for refusing to pay the fine attached to that infraction of the law.

In 1788 Alexander Hamilton made reference to this premise when he wrote the following, “Government implies the power of making laws. It is essential to the idea of a law, that it be attended with a sanction; or, in other words, a penalty or punishment for disobedience. If there be no penalty annexed to disobedience, the resolutions or commands which pretend to be laws will, in fact, amount to nothing more than advice or recommendation. This penalty, whatever it may be, can only be inflicted in two ways: by the agency of the courts and ministers of justice, or by military force; by the COERCION of the magistracy, or by the COERCION of arms.” (Source: Federalist 15)

The definition of coercion is: the use of express or implied threats of violence or reprisal (as discharge from employment) or other intimidating behavior that puts a person in immediate fear of the consequences in order to compel that person to act against his or her will. (My emphasis)

I now want to ask a two part question; what is the definition of the word law, and what purpose should the law serve? In answer to the first part, Merriam Webster’s defines the word law as: a rule of conduct or action prescribed or formally recognized as binding or enforced by a controlling authority.

In answer to the second part of my question I’ll let Frederic Bastiat answer for me, “What, then, is law? It is the collective organization of the individual right to lawful defense.

If every person has the right to defend—even by force—his person, his liberty, and his property, then it follows that a group of men have the right to organize and support a common force to protect these rights constantly. Thus the principle of collective right—its reason for existing, its lawfulness—is based on individual right. And the common force that protects this collective right cannot logically have any other purpose or any other mission than that for which it acts as a substitute. Thus, since an individual cannot lawfully use force against the person, liberty, or property of another individual, then the common force—for the same reason—cannot lawfully be used to destroy the person, liberty, or property of individuals or groups.”

If what Bastiat said is true, then the purpose which all laws should serve is the protection of the lives, liberty and property of the people. While he may have worded it somewhat differently, Thomas Jefferson said basically the same thing when he wrote the Declaration of Independence, “We hold these truths to be self-evident, that all men are created equal, that they are endowed by their Creator with certain unalienable Rights, that among these are Life, Liberty and the pursuit of Happiness. — That to secure these rights, Governments are instituted among Men, deriving their just powers from the consent of the governed…”

If government is, in fact, instituted to secure our rights, then doesn’t it make sense that the laws government passes should be in pursuance of that purpose as well? If that is the case, then what would you call any government, be it local, State, or federal that passes laws that restrict those rights?

James Wilson, one of the signers of both the Declaration of Independence and the Constitution once wrote, “Government … should be formed to secure and enlarge the exercise of the natural rights of its members; and every government which has not this in view as its principal object is not a government of the legitimate kind.” (Source: Lectures on Law)

Jefferson says that our government derives its authority from the consent of the governed; you and I. Our Founders wrote a Constitution which outlines the structure this government shall take and the powers it shall have. They declared that this Constitution is to be the supreme LAW of the land. Therefore, does that not make you and I the ‘controlling authority’ over our government?

How is it then that they can create all these agencies with the power to enforce their laws upon us, but we have no authority to enforce our law upon them other than by voting them out of office? Almost every law I’ve ever read comes with a fine or penalty attached for the violation of that law; every law except the Constitution that is.

Was this intentional, that the supreme LAW of the land was to be written in such a way that those elected to public office could violate it with impunity? Patrick Henry sure seemed to think so, “…there is no real actual punishment for the grossest maladministration. They may go without punishment, though they commit the most outrageous violation on our immunities. That paper may tell me they will be punished. I ask, by what law? They must make the law — for there is no existing law to do it. What — will they make a law to punish themselves? This, Sir, is my great objection to the Constitution, that there is no true responsibility — and that the preservation of our liberty depends on the single chance of men being virtuous enough to make laws to punish themselves.” (Source: speech before Virginia Ratifying Assembly)

Our Founders did not win their liberty at the voting booth; they won it because they had the courage to stand up against those who sought to deprive them of it. In his Declaration of the Causes and Necessities of Taking up Arms, Jefferson writes, “Honor, justice, and humanity, forbid us tamely to surrender that freedom which we received from our gallant ancestors, and which our innocent posterity have a right to receive from us. We cannot endure the infamy and guilt of resigning succeeding generations to that wretchedness which inevitably awaits them if we basely entail hereditary bondage on them.”

Two years prior to that Jefferson wrote, “Single acts of tyranny may be ascribed to the accidental opinion of the day; but a series of oppressions, begun at a distinguished period, and pursued unalterably through every change of ministers (administrators) too plainly proves a deliberate, systematic plan of reducing us to slavery.”

I find it somewhat hypocritical that people will stand up and condemn slavery, then turn around and vote for candidates who have no qualms about restricting our liberty and reducing us to slavery…just as Jefferson described. Then, to make matters even more laughable, they turn around and condemn those of us who refuse to participate in our own enslavement by choosing who will rule over us. As Daniel Webster once said, “There are men in all ages who mean to govern well, but they mean to govern. They promise to be good masters, but they mean to be masters.”

I hate to be the bearer of bad news, but government is not our master, it is our servant. It’s time we grew a pair and stop letting government trample all over our rights. It’s time we reasserted our sovereign right to tell government that it cannot violate our rights with impunity; and if they don’t listen they must pay the consequences.

We have tried the voting booth but government keeps getting bigger and more powerful. We have tried petitioning them, (at least I have), and they send me form letters in response. I’m tired of the bullshit, it’s time we gave them an ultimatum; obey the Constitution and respect the Bill of Rights…OR ELSE!

If these words scare or offend you, let me remind you of something Thomas Jefferson said in a letter to Abigail Adams, “The spirit of resistance to government is so valuable on certain occasions, that I wish it to be always kept alive. It will often be exercised when wrong, but better so than not to be exercised at all. I like a little rebellion now and then. It is like a storm in the atmosphere.”

America was not founded by cowards who sit back and allowed their government to trample all over their rights; it was founded by men who had the courage to stand up to tyrants. As Patrick Henry said, “Give me liberty or give me death.” Today’s motto may as well be, “Take my liberty and give me football, Facebook and beer.”

Y’all ought to be ashamed to call yourselves Americans…In closing, I’d like to leave you with one final quote from Ben Franklin, “They that can give up essential liberty to obtain a little temporary safety deserve neither liberty nor safety.”
If you don’t want to fight for your liberty, then you deserve to be slaves.

But maybe Van Loon was right when he said…