Juvenal was a Roman who wrote satirical poems during the late first and early second century A.D. He is probably best known for saying, “Give them bread and circuses and they will never revolt.” Juvenal must have been a cynic like me, for I too believe that as long as people’s bellies are full and they have things to keep them entertained they will never, no matter how tyrannical and oppressive their government might become. Sure, they might gripe, they might even protest; but revolt…not in a million years. 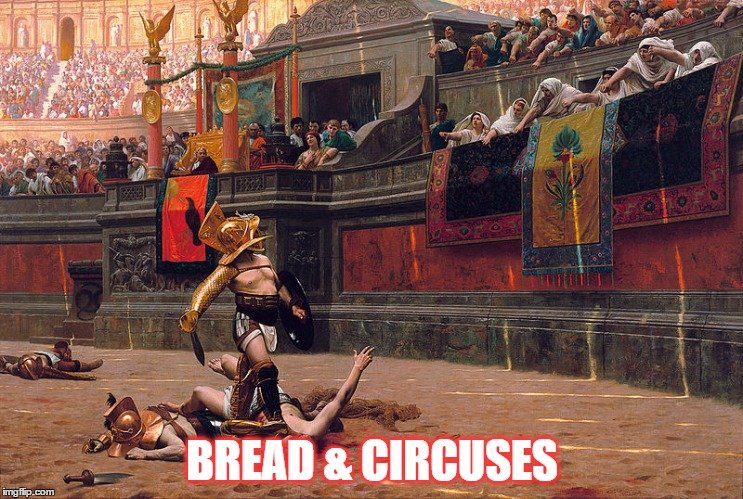 Although no one knows for sure, attendance at the gladiatorial games in Rome was probably free; with tickets being given out to the public to ensure they sat in designated seating areas according to wealth and social status. Often, before the games began, Roman soldiers would toss food and gifts into the crowd to satisfy their hunger. It is due to the fact that often this food consisted of bread, and that it was handed out at circuses and gladiatorial games that the term bread and circuses came into existence.

Those in the upper crust, or upper classes of Roman society, knew that, no matter how impoverished the lives of the people were, that if you provided them with food and entertainment they would not rebel against established authority. Have people changed that much in the 2,000 years since the Romans offered up spectacles of blood and gore? Aside from a few shining moments, (like the American Revolution), when people cared more for liberty than life itself, people haven’t changed that much; they would rather be fat, dumb and happy than to exert any effort in obtaining or defending something as trivial as liberty.

Look at all the ways in which people seek entertainment today; and often it isn’t even free like it was in the times of ancient Rome. People will pay, and endure pouring rain and snow to attend a football game. They will sit in the blistering heat in an outdoor concert to see their favorite pop star. They will spend hours glued to their iPhone or PC scouring Facebook and Twitter for something to like or comment upon. Yet ask them to spend ten minutes reading something that might open their eyes to the fact that their government is depriving them of their liberty and you may as well be asking them to amputate their own head. 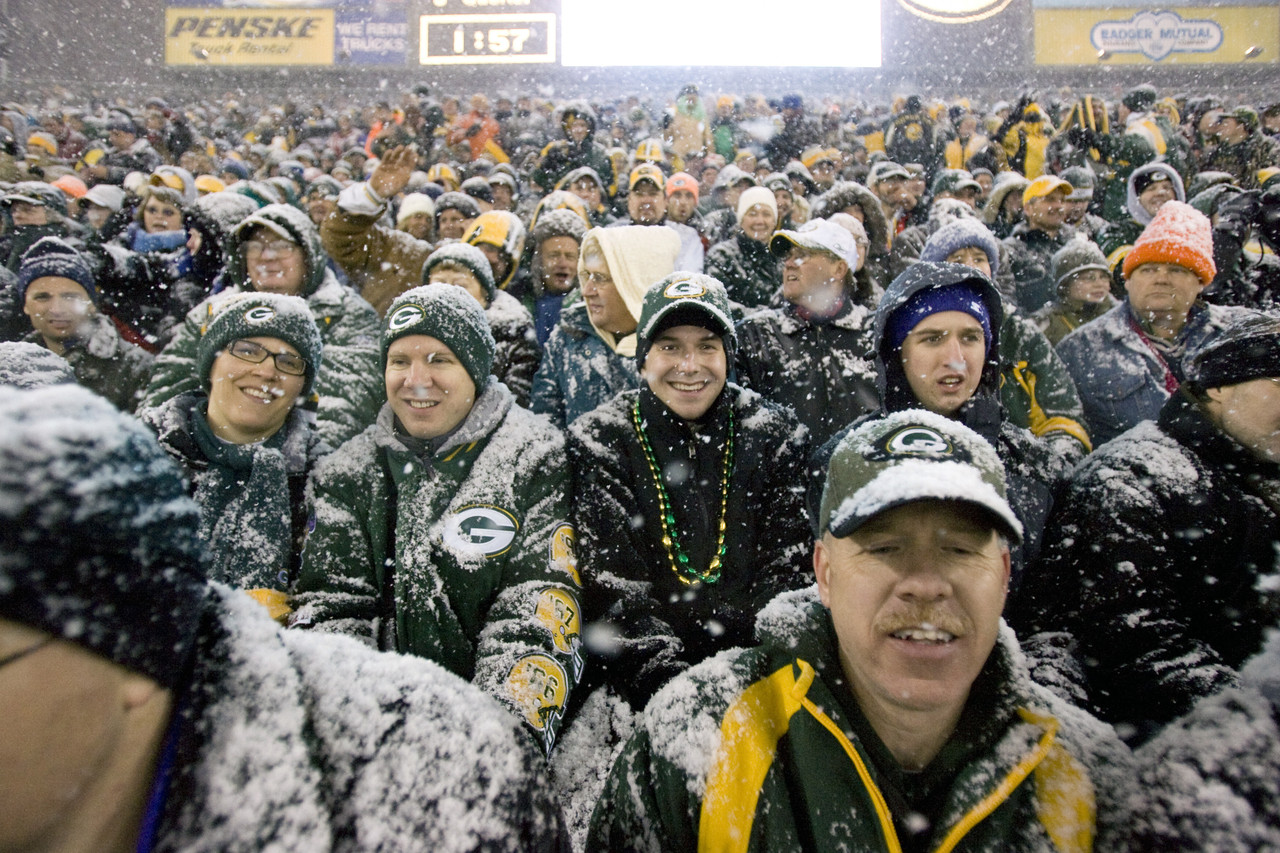 Today it seems to be that the extent of people’s political involvement is limited to the support of candidates belonging to the same political party they do; and to ask that the general public actually make an effort to learn how their system of government came into existence, the purpose for which it was originally established, or how it has perverted the fundamental principles it was founded upon is simply asking too much of them.

The simple fact that many people believe America has a democracy is enough to justify that statement; even when a vast majority of them couldn’t tell you the difference between a democracy and a Republic. Yet these same people vote – in droves – and then have the audacity to say that those who do not participate in the fraud of voting lose the right to complain when their government does things they disagree with.

I didn’t vote for these criminals and idiots; so why is it that those who did retain the right to bitch and moan about what they are doing, while those who understand that the game is rigged, the system is broken, lose that right?

People want to feel safe and secure, so they ask their government to pass laws that restrict the fundamental right of the people to keep and bear arms. People do not want to be offended by the things people say or the images they look at, so they ask government to censor speech and they tear down monuments they disagree with. People want the poor to be cared for, so they demand that those who earn a living subsidize the existence of those who can’t or won’t fend for themselves.

Science fiction author Robert Heinlen often spoke of the modern day bread and circuses of American Politics, calling it the cancer of democracy. Did you know that when America first became an independent nation that only white male landowners were allowed to vote? But over the course of our nation’s history the right to vote has been extended to everyone who has reached the age of 18; aside from those in some states who have been convicted of felonies.

Heinlen said this about what happens when you extend the right of voting to everyone, no matter how educated or well informed they are, “But once a state extends the franchise to every warm body, be he producer or parasite, that day marks the beginning of the end of the state. For when the plebs discover that they can vote themselves bread and circuses without limit and that the productive members of the body politic cannot stop them, they will do so, until the state bleeds to death, or in its weakened condition the state succumbs to an invader—the barbarians enter Rome.”

If I were to propose that before anyone be allowed to vote they pass a comprehensive civics test to ensure that they understood the structure and function of their government I would be accused of attempting to violate their right to vote. I suppose it doesn’t matter to them that due to their ignorance the people they vote for are infringing upon the rights of others and destroying the very liberty our system of government was supposed to be protecting.

People have been conditioned well by their educational systems, by the media, and by the fact that they care more about being entertained than they do about picking up a book that might teach them the truth.

If there is one thing a study of American History would teach people it is that for a brief moment liberty was the driving force behind the political decisions of those who ended up shaping American into an independent nation. But even that didn’t last long, as Patrick Henry bemoaned when objecting to the system of government proposed by those who supported the new Constitution, “Liberty, the greatest of all earthly blessings-give us that precious jewel, and you may take every thing else: But I am fearful I have lived long enough to become an fellow: Perhaps an invincible attachment to the dearest rights of man, may, in these refined, enlightened days, be deemed old fashioned: If so, I am contented to be so: I say, the time has been when every pore of my heart beat for American liberty, and which, I believe, had a counterpart in the breast of every true American.”

Henry spoke those words 240 years ago, and the concern over liberty has diminished even further amongst the general public. Those who do understand what liberty is, and that their government is actively seeking to undermine and destroy it are labeled radicals and extremists; which only goes to give credence to what historian Charles Austin Beard once said, “You need only reflect that one of the best ways to get yourself a reputation as a dangerous citizen these days is to go about repeating the very phrases which our founding fathers used in the great struggle for independence.”

So, if my writings, my opinions offend you; tough shit. I’d rather go down into the Earth knowing that I lived my life standing for the same principles and beliefs as did the men who founded America on the precept that “…all men are created equal, that they are endowed by their Creator with certain unalienable Rights, that among these are Life, Liberty and the pursuit of Happiness. — That to secure these rights, Governments are instituted among Men, deriving their just powers from the consent of the governed, — That whenever any Form of Government becomes destructive of these ends, it is the Right of the People to alter or to abolish it, and to institute new Government, laying its foundation on such principles and organizing its powers in such form, as to them shall seem most likely to effect their Safety and Happiness.”

If those words frighten you, or you feel that your beliefs are threatened by them, then maybe you need to turn off your TV’s and put down your iPhones and pick up a copy of the Declaration of Independence and study the words that gave birth to America. Who knows, you might actually learn something.

In the meantime, I will continue to oppose this system of government we have…and anyone who blindly supports it simply because their party is in control of it.