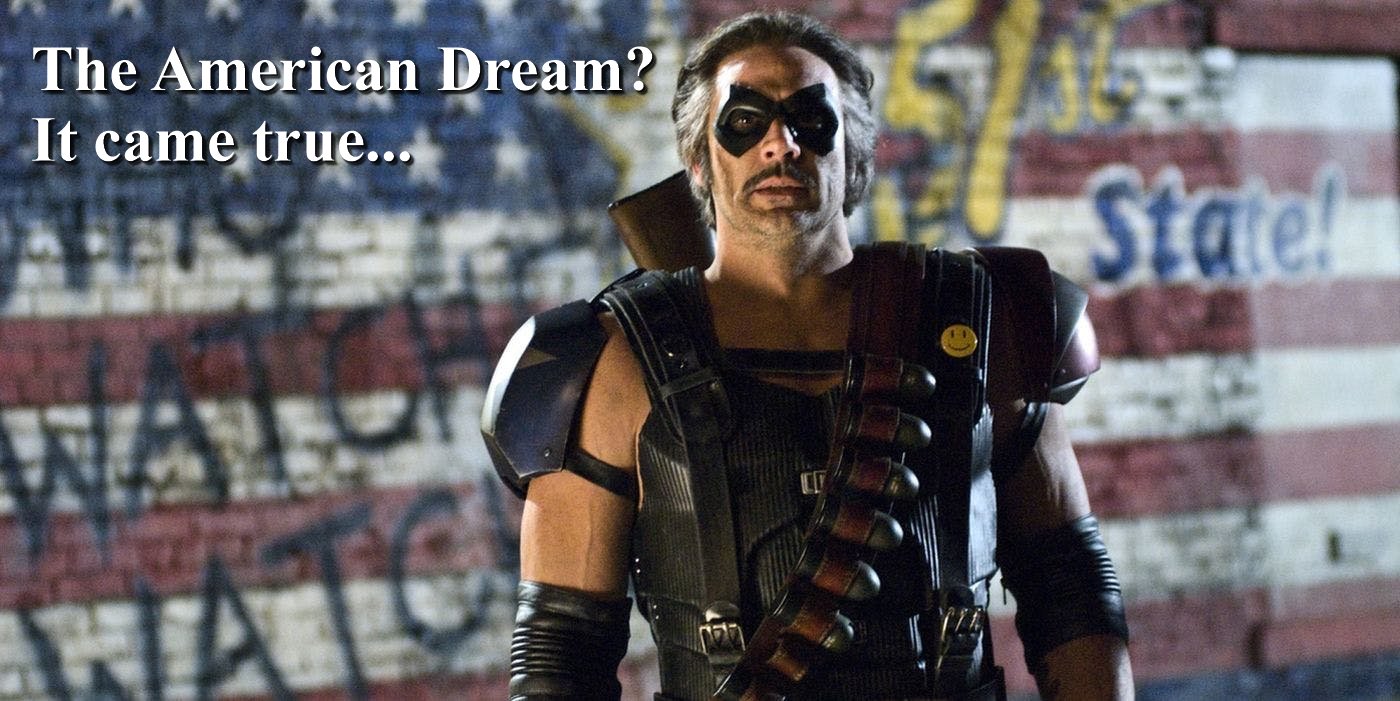 In today’s modern political arena it is perfectly acceptable for one side of the political spectrum to hurl insults, or sling mud, at those aligning themselves with the other side of the spectrum. Democrats criticize and insult Republicans, and Republicans criticize and insult Democrats; and it is accepted as part of the political process of choosing who will represent the people in government.

So, while it is okay for Republicans and Democrats to insult each other; with each side saying that the opposing ideology is bad for America, it IS NOT acceptable to say that government itself is bad for America. It seems that once one makes such a claim, once they have passed that Rubicon, there is no going back; they are a nutcase, an extremist, or a threat to the American way of life itself.

But what is the American way of life? Is it to pillage and plunder one segment of society to benefit another? Is it to submit to absolute and arbitrary power at the cost of your rights and your liberty? Is it to vote, pay your taxes on time, and fly the American flag; calling yourself a true patriot?

There is a scene in the film adaptation of the graphic novel Watchmen which shows a flashback to a past memory from the character Night Owl in which he recalls a time when he and the Comedian arrived at the scene of a protest that became violent when the mob turned on the superheroes. While I can’t recall the exact wording, Night Owl asks the Comedian whatever happened to the American Dream. The Comedian responds by saying something like, “It came true, you’re looking at it.”

For awhile it was, then, as the saying goes, it all began to go South; and just so as there is no confusion, by South I don’t mean to Texas or Florida; going South is a euphemism for going to hell. So what happened? Well to put it bluntly, the Constitution happened.

In a recent article I mentioned that it is likely that very few people have ever actually read the Constitution. If that is the case, it is probably true that very few Americans have ever sat down and read our first constitution; The Articles of Confederation. I’d be more than willing to print out a copy if you’re interested in reading it, but that’s beside the point. The point is that, had you read the Articles of Confederation you would have seen that our first system of government had very few powers at all.

The Congress established by the Articles of Confederation could not enact law; there was no president to sign pieces of legislation they had passed, which would then be binding upon the entire country. The process for making laws was quite different under the Articles of Confederation. Instead of Congress passing a bill, then sending it to the President for his signature, (as it is done today), the Congress sent recommendations to the State Legislatures, which then required the unanimous approval of all 13 State Legislatures to become binding.

The power of taxation was similar, with Congress sending its proposed requirements for taxes to the States, then leaving the States to impose the laws, or means, by which those taxes would be collected.

All that lawmaking power has changed in that the States, other than by representation in the Senate, are cut out of the loop when it comes to any say over what becomes law in this country; and even representation has gone by the wayside with the ratification of the 17th Amendment.

Seeing as how most people have probably never read the Articles of Confederation, I don’t think I’m going too far out on a limb to say that most have probably never read any of the arguments against the constitution which was presented to the States for their consideration in 1787. These men opposed the Constitution, all for various reasons. Some of them wrote under pseudonyms; such as Cato, Centinel, Brutus, and Federal Farmer, while others, such as Patrick Henry, spoke openly without concealing his identity.

Have you ever heard the old saying, only time will tell? It implies that a period of time must pass before the validity of something can be ascertained. When those who opposed the Constitution, the Anti-Federalists, wrote their essays they were predicting what might happen if the people should choose to adopt the Constitution which had been presented to them for their consideration.

I’d say that 2-1/2 centuries is a sufficient amount of time to make an educated guess as to whether the Anti-Federalists were right to fear the implementation of the government outlined by the Constitution. I could almost go item by item and prove that almost every prediction made by these Anti-Federalists have come true, but to save time I will focus on one passage from the 8th essay written by Robert Yates under the pseudonym of Brutus.

In Brutus #8 Yates writes, “The power to borrow money is general and unlimited, and the clause so often before referred to, authorises the passing any laws proper and necessary to carry this into execution. Under this authority, the Congress may mortgage any or all the revenues of the union, as a fund to loan money upon, and it is probably, in this way, they may borrow of foreign nations, a principal sum, the interest of which will be equal to the annual revenues of the country. — By this means, they may create a national debt, so large, as to exceed the ability of the country ever to sink. I can scarcely contemplate a greater calamity that could befall this country, than to be loaded with a debt exceeding their ability ever to discharge.”

From time to time we hear threats of a possible government shutdown unless the debt ceiling is raised. The debt ceiling is the amount of money our government is allowed to borrow to keep itself operating. Now think about that for a moment. Our Founders realized that, from time to time, money must be borrowed to pay for unexpected emergencies; such as wars. But to fund the day to day operation of government, a massive debt was something that would not have crossed most of their minds.

Yates warned that under the proposed Constitution the ability of our government to borrow endless sums of money was unlimited; a fact which has proven to be true. He then goes on to say that under the Constitution it is probable that the government would borrow so much money that the interest would equal the revenue of the entire country.

The interest on our national debt currently stands at $3.138 billion, which boils down to $9,541 for each and every citizen in the United States. That’s how much debt the government has amassed on your behalf; debt which you are on the hook for.

I’m assuming that most of you have never read the 14th Amendment; although some of you may have referred to its equal protection clause from time to time. Are you aware that Section 4 of the 14th Amendment states, “The validity of the public debt of the United States, authorized by law, including debts incurred for payment of pensions and bounties for services in suppressing insurrection or rebellion, shall not be questioned.”

If you’ll notice it does not say national debt, it says public debt. What that means is that YOU are responsible for paying that debt off, not those you elect. That debt is YOUR responsibility, and if America cannot pay off that debt it is conceivable that those who hold the debt could foreclose and take possession of this country, and everything in it; including you and I and our homes and property.

And what did Yates say about a scenario such as this? Well, he said that no greater calamity could befall a nation than to amass a debt so large that it could never pay it off.

So while you argue and bicker over what laws are being passed by the opposing party, government keeps on keeping on; meaning it keeps passing laws that require it spend more money; money which it has to borrow because it is operating at a $989 BILLION deficit already.

Those numbers are so large that it is almost impossible to wrap our heads around them. So let me see if I can help you out a bit. If you have $1 you don’t have much money, do you? But multiply that by 1,000 and you’ve got a pretty hefty chunk of change. Now multiply that by another 1,000 and you’re starting to think that you’re rich; having amassed a sum of $1 million.

But as far as our national debt goes, you may as well be carrying a handful of pennies around. Now if you multiply that $1 million by 1,000 you’re starting to get into the big numbers; having reached a billion dollars. So how much is a trillion? A trillion is a billion multiplied by 1,000, or $1,000 billion; and our national debt right now is 22 times that size!

But that’s okay, your elected officials are doing the things you put them into office to do; to hell with the fact that our government is bankrupt and has to borrow gigantuan sums of money to pay for it all.

To hell with all these predictions for catastrophe by a bunch of old dead guys, you have a home, a job, food on the table, and things to keep you entertained. To hell with liberty, you have comfort and security.

Ever see a house made out of playing cards? Eventually, if you keep adding to it, it will collapse. Well, that’s America right now, a house of cards built upon the illusion that we are the greatest country in the world with the most freedom in the world. You believe that simply because you get to go to the polls every couple of years and pick from among a bunch of people those who will represent you in government that we are free.

We are not free. We have less freedom now than our Founders did when they decided to rise up against their government in 1776. We are straddled with a debt so massive that even if we shut the entire government down for a year we couldn’t pay it off.

So like I asked earlier, do you think this is the vision the Founders had of the American Dream? And if not, then why the hell do you keep supporting the entity, and the document, which has allowed for this to happen? Why do you keep ignoring and ridiculing those who try to point out the truth to you? You may not care about all these things I say now because you are comfortable in your lives, but one day this house of cards is going to collapse, and when it does you will wish you had listened to me, and those like me.

But as with the Anti-Federalists, only time will tell whether our predictions are accurate…