Mind Your Own Damned Beeswax 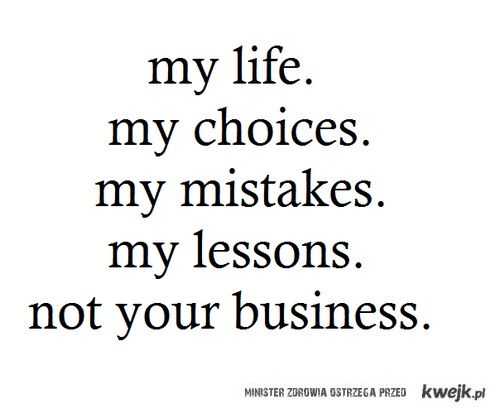 “And I don’t believe in minding no one’s business but my own.”
~Charlie Daniels~
(A Few More Rednecks)

Whenever I leave my home and am forced to interact with my fellow human beings, I often wonder what is going on inside their minds as I pass them on the highway or in the stores where I make my purchases. One of my favorite things to do while my wife shops is to sit on a bench in the mall with a cup of hot coffee and just watch people as they wander about the mall aimlessly. I often wonder, as I see these people, how many times a day they wonder how free they are…if they wonder about it at all.

When speaking of rights there is an old saying that people should remember, “What’s mine is mine and what’s yours is yours.” What that basically means is, you don’t mess with my rights and I won’t mess with yours. If I cannot take something from you, or deprive you of the ability to do something without committing a crime, then why do people think it is okay for government to do it on their behalf?

The thing about rights is that they are not subject to the overall support of society. If I want to own 10 guns or 1,000 that’s none of your business and it is not subject to the legislative authority of people who are supposed to represent me and protect and defend my rights. Now if I USE one of those guns to deprive you of your life, or your rights, then I have abused my rights and CAN, AND SHOULD BE punished. But the mere possession of those guns should be none of your concern.

The same principle applies to wealth as well. I constantly hear from those on the political left that the rich need to pay more for programs that benefit the poor. Why, just because they have all that money? It’s ironic because those same people are probably those who cry the loudest if they win the lottery and have 45-50% of it taken in the form of taxes. A person’s wealth is their property; regardless of whether they earned it by hard work or if it was inherited. Nobody is entitled to a single cent of that money unless the person it belongs to decides to donate a portion of it to charity.

Just look at the world we live in today and you’ll see a world where our right to our property; both intellectual and physical, is thought to be public property; therefore subject to the whim and caprice of the public.

What you do with your life is your business, not mine; and as long as you don’t try to force your beliefs upon me I will leave you alone. If people would just adhere to the saying, ‘Live and let live’ then the world would be a lot better place. But people are not satisfied with living their lives and leaving others to do the same, they want to impose their vision of what is right upon others.

Take the subject of homosexuality. I don’t care what you do with your life behind closed doors; that’s none of my business. I don’t have to agree with what you do, but at the same time I have no right to tell you that you cannot engage in those activities; as long as both parties consent to it. What you do with your life is your business, not mine. I won’t judge you on your actions; that I leave to God. I only care about how you treat me and respect my rights. If you attempt to force your views or opinions on me, that’s when I take issue with you. But if you leave me alone I’ll leave you alone.

The same thing applies towards my guns. I am 61 years old now and for most of my life I have owned guns. Not once have I pointed that gun at another human being and demanded that they give me their possessions, or threatened to end their life because they have angered me. My guns, as well as the guns of every other law abiding citizen in this country, are there for one purpose…to defend the life, property and liberty of their owners.

If bad people use guns to commit horrific crimes, then don’t blame the tool, blame the people, or the society that creates such monsters. Maybe the problem isn’t the abundance of guns in society, maybe the problem is a lack of respect for the lives and property of others. Taking the guns away will not remedy that.

Awhile back I had a conversation with someone who told me, regarding our governments intrusive surveillance of my private correspondence, “If you don’t have anything to hide you shouldn’t have anything to worry about.” Is that so? I wonder how this individual would feel if I entered into his home and installed listening devices in every room so that I could monitor his private discussions with his wife and kids. After all, if he has nothing to hide…

I get the distinct impression that most people believe government exists to take care of us; as if we are too stupid and immature to do that for ourselves – and in most instances that is probably true. People seem more than willing to sacrifice their rights, and the rights of others, to obtain a small measure of comfort or security.

But life is fraught with peril and you can’t expect government to be there by your side protecting you from all of them. You may walk outside and get struck by lightning, and I bet there are people who would want government to ban lightning?

Among Thomas Jefferson’s many writings were those he placed into a Commonplace Book of great quotations. Among the many quotes in that book we find one of particular interest to the subject at hand, “It is a false idea of utility to sacrifice a thousand real advantages for the sake of one disadvantage which is either imaginary or of little consequence; this would take fire away from men because it burns, and water because it drowns people; this is to have no remedy for evils except destruction.”

How many laws, rules, and regulations do we tolerate because we believe they make our lives safer or more comfortable? I get the distinct impression that there are those living among us today who would sacrifice every bit of their freedom for the promise of comfort and security. Well Ben Franklin had something to say to people like that, “Those who would give up essential Liberty, to purchase a little temporary Safety, deserve neither Liberty nor Safety.”

You see, most people are not content to finding comfort and security for themselves, they want to impose their vision of a Utopian society upon everyone else. Unfortunately they cannot do that of their own volition, so they use government to do it for them. The government has its own agenda, and I won’t go into that right now, but the two political parties in this country consist of relatively like-minded people who want to elect enough people to office who will use the coercive power of government to impose their vision of a perfect world upon everyone else.

It doesn’t really matter if you are a Democrat or a Republican, all you care about is whatever political party platform you adhere to, and the individual rights of those you would oppress get in the way, to hell with those rights!

The moment you say I must surrender a portion of my rights so that you feel safer, or are not offended by me exercising them, you become my sworn enemy and I will just as hard against you as I would defending your rights. Being offended by what I say or do is of no concern to me. In fact, let me quote actor Stephen Fry regarding how I feel about whether or not I offend you, “It’s now very common to hear people say, ‘I’m rather offended by that.’ As if that gives them certain rights. It’s actually nothing more… than a whine. ‘I find that offensive.’ It has no meaning; it has no purpose; it has no reason to be respected as a phrase. ‘I am offended by that.’ Well, so fucking what.”

Thomas Jefferson once defined liberty as “…unobstructed action according to our will, within the limits drawn around us by the equal rights of others.” But he immediately followed that with, “I do not add ‘within the limits of the law’; because law is often but the tyrant’s will, and always so when it violates the right of an individual.”

If our government was truly established to secure liberty to all the inhabitants of this country, it’s doing a bang up job of it; if you want my honest opinion. (And that was sarcasm if you didn’t catch it). Yet the American people keep voting for the same type people who don’t care one whit about securing liberty to any of us; all they care about is benefitting their constituent base at the expense of the rest of society.

Tyranny can manifest itself in all shapes, in all political systems, and under the auspices of all political parties. So, either you are a defender of liberty and an opponent to tyrants, or you are an accomplice in the destruction of the liberty our government was supposed to secure.

Which one is it? Let me give you a hint: If you vote, you’re part of the problem…