As Simple As I Can Make It

Do people think that the 2nd Amendment established our right to keep and bear arms? The 2nd Amendment, along with the 9 other amendments comprising the Bill of Rights, was ratified in 1791. Therefore, where did the Colonists get the right to bear arms against Great Britain in 1776?

The right to keep and bear arms predates government, it is one of our natural rights; the right to defend ourselves, our property, and our liberty. People confuse the word arms with guns; which is not quite accurate; guns are merely one category of arms.

To understand the 2nd Amendment you must understand what the word arms meant when it was written. The word arms is a derivative of the French word ‘armes’, which means weapons of a warrior. 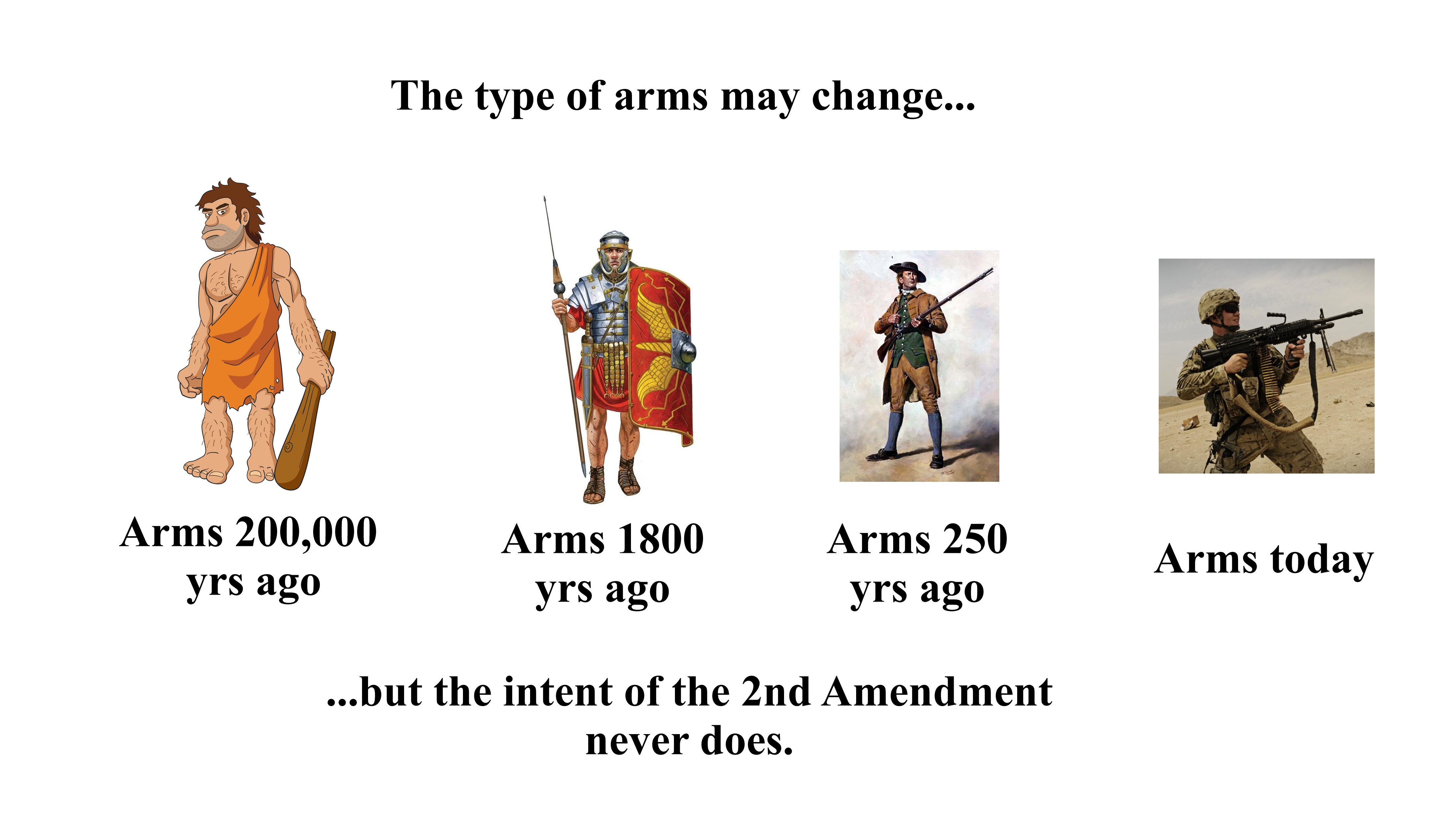 Therefore, the 2nd Amendment was written to be a shield protecting the people’s right to keep and bear the same arms as warriors; or in our case, our military. The reason they fought to preserve and protect that right was so that the people could be sufficiently armed, and trained in the use of them, so that they could resist any efforts by their government to tyrannize and oppress them…not so they could hunt or protect themselves against criminals.

In numerous instances the courts have upheld our right to keep and bear arms. Here are but a few of them:

–The right of the people to keep and bear arms shall not be infringed.’ The right of the whole people, old and young, men, women and boys, and not militia only, to keep and bear arms of every description, and not such merely as are used by the milita, shall not be infringed, curtailed, or broken in upon, in the smallest degree; and all this for the important end to be attained: the rearing up and qualifying a well-regulated militia, so vitally necessary to the security of a free State. Our opinion is that any law, State or Federal, is repugnant to the Constitution, and void, which contravenes this right. (Nunn vs. State, 1846)

–The right of a citizen to bear arms, in lawful defense of himself or the State, is absolute. He does not derive it from the State government. It is one of the “high powers” delegated directly to the citizen, and `is excepted out of the general powers of government.’ A law cannot be passed to infringe upon or impair it, because it is above the law, and independent of the lawmaking power. (Cockrum vs. State, 1859)

–To prohibit a citizen from wearing or carrying a war arm . . . is an unwarranted restriction upon the constitutional right to keep and bear arms. If cowardly and dishonorable men sometimes shoot unarmed men with army pistols or guns, the evil must be prevented by the penitentiary and gallows, and not by a general deprivation of constitutional privilege. (Wilson v. State, 1878)

So what has changed since those rulings were handed down? Has the Second Amendment been amended by another constitutional amendment? If not, then it remains as binding upon the inability of legislators to restrict as it did the day it was ratified.

The only thing that has changed is the ignorance of the citizenry regarding what the 2nd Amendment means and what purpose it was written for. This purpose was explained by Joseph Story, (even though I can’t stand that prick for his loose construction of other constitutional powers), “The right of the citizens to keep and bear arms has justly been considered, as the palladium of the liberties of a republic; since it offers a strong moral check against the usurpation and arbitrary power of rulers; and will generally, even if these are successful in the first instance, enable the people to resist and triumph over them.”

Government, be it local, State, or federal, did not create itself, it was created by the sovereign will of the governed; being delegated with certain powers to exercise on behalf of its creators. Therefore, any bill of rights is a statement by those who created government, telling it that they are not to touch those rights.

The right to speak freely, worship as we please, petition government for a redress of grievances, be secure in our homes and belongings against unreasonable searches and seizures, AND the right to keep and bear arms, are limitations upon government’s power to infringe upon or violate those rights.

The general welfare, your desire to live without fear of becoming a victim of crime or terrorism does not trump or supersede our rights; not now, not ever.

For years, decades even, we have sat back and done nothing but bitch and moan about the gradual encroachments upon our rights; now those who care dearly about them have had enough…but those in power do not care; they have gotten a taste for power and keep pushing and pushing for more laws to further restrict that right; and an armed citizenry stands in the way of their plan for absolute despotism. So they keep nibbling away at the 2nd Amendment; a little bite out of it here, a small slice of it there; with the ultimate goal being total confiscation of all privately owned arms.

Well, if they don’t tread carefully the people are liable to start pushing back!!!