Is Inception Possible (And Is It Time To Start Feeding the Hogs?)

In 2010 Christopher Nolan released the film Inception, starring Leonardo DiCaprio as Dom Cobb; an extractor who infiltrates people’s subconscious minds and steals information from them. The plot centers around Cobb and his team who have been hired by Saito, played by Ken Watanabe, who have been given the impossible task of implanting an idea into the heir of Saito’s competitor in the global energy business.

In the beginning of the film Cobb is shown talking to Saito, although they are actually ‘sharing’ a dream. Cobb asks Saito what the most resilient parasite in the world is, and then answers his own question by saying, “An idea. Once an idea has taken hold of the brain, it’s almost impossible to eradicate.” I think there is quite a bit of truth to that statement, as I’ve found it is next to impossible to change a person’s beliefs once they have been firmly established. The question is, how do people beliefs and ideas come into being?

This leads us to another scene from the film Inception, where Saito is asking Cobb if he can steal an idea from someone, can he also plant an idea into their mind as well. The dialogue for that scene goes as follows:

SAITO: If you can steal an idea from someone’s mind, why can’t you plant one there instead?

ARTHUR: Okay, here’s planting an idea: I say to you, “Don’t think about elephants.” What are you thinking about?

ARTHUR: Right. But it’s not your idea because you know I gave it to you.

SAITO: You could plant it subconsciously-

ARTHUR: The subject’s mind can always trace the genesis of the idea. True inspiration is impossible to fake.
Is that true, can a person trace the genesis, or origin, for each and every idea they have? Can you do that, trace the origin for every idea you have? I know I certainly can’t; some of them yes, but all of them? No way; which leads me to the purpose for this article – where do your ideas come from.

I once read that by the time a person hits their late teens they have pretty much established their own identities; meaning they have formed their own belief systems and become free thinking, (if that’s even an accurate description of what they do), individuals. However, when we first enter into this world, kicking and screaming, our minds are a blank slate with only the bare bones operating system for our bodies functioning at full capacity. It is everything that happens to us after exiting the womb that forms our beliefs, our understanding of life, and our thoughts and ideas.

So our parents, our school teachers, and the media we are exposed to, all are, in reality, implanting thoughts and ideas into our heads; in a way, performing inception. As I’ve said numerous times, our minds are incredible organs; they store every bit of data they are exposed to somewhere in the recesses of that gelatinous matter we call our brain.

Don’t believe me? How many of you have ever heard a song, then years, decades later heard it again and recalled the beat and the lyrics to it as if you just heard it minutes before? All that information, everything we are exposed to, gets stored in our minds somewhere; and much of that inputted data is what forms our beliefs regarding a wide range of subjects; including our thoughts on history and politics.

The sad thing is, once people have these ‘ideas’ firmly implanted in their minds, no amount of evidence can convince people that those ideas are based upon inaccurate information; meaning their ideas are wrong. There are some in whom the indoctrination they underwent at the hands of the public school systems have not stuck; myself being a perfect example of that phenomenon. I underwent the same thought forming curriculum as many of my friends did, but for some reason I was able to break free of the shackles that had bound my mind; and I realized there was a whole new world of truth just waiting for me to find it.

Sadly, most others aren’t as fortunate as I was, as they remain bound to and by the things they were taught in school; which is very limited, and more often than not, wholly inaccurate. Students are often given ‘textbooks’ which are nothing more than one persons thoughts on the subject matter they deal with. Anyone can write a history book, but for it to be accurate it has to discuss both sides of the story or events, and they have to be loaded with facts and quotes from those who were alive when those events took place if they are to be accurate.

In 1788, during the period which saw our constitution being argued by the States, Noah Webster wrote an essay on education in America, in which he stated, “But every child in America should be acquainted with his own country. He should read books that furnish him with ideas that will be useful to him in life and practice. As soon as he opens his lips, he should rehearse the history of his own country; he should lisp the praise of liberty, and of those illustrious heroes and statesmen, who have wrought a revolution in her favor.

A selection of essays, respecting the settlement and geography of America; the history of the late revolution and of the most remarkable characters and events that distinguished it, and a compendium of the principles of the federal and provincial governments, should be the principal school book in the United States. These are interesting objects to every man; they call home the minds of youth and fix them upon the interests of their own country, and they assist in forming attachments to it, as well as in enlarging the understanding.”

I bet the list of those who have undertaken such studies continues to grow smaller.

How many of you have read any of the rebuttals to the abovementioned references; such as any of the writings by the Anti-Federalists; those who voiced their concerns over the danger posed to the States and the people by the constitution, or have read Abel Upshur’s book, A Brief Enquiry Into The True Nature and Character of Our Federal Government; which was written as a rebuttal to Story’s Commentaries?

How many of you have delved into the proceedings that produced the constitution, the notes taken by Madison himself; which may or may not have been edited by him to paint him in a better light for future generations; and which those alterations cannot be rebuked since every person who attended are long since dead?

How many of you have delved into the character and integrity of those who actually wrote the constitution; their motivation and intent in forming this new system of government; and those who wrote exposing them for what they were; traitors to the federation who sought a bloodless coup to overthrow the existing system of government under the Articles of Confederation.

If you cannot answer ‘I have’ to all the above questions, then your thoughts and beliefs regarding the history of how our constitution came into existence, and what it means and says, has been shaped for you by those who pass themselves off as educators; and they have failed you; for you have not been educated, you have been indoctrinated.

There is a constant theme running throughout the film The Matrix; that theme being that Morpheus is trying to free him from a lifetime of indoctrination into a system that had previously held him in bondage. That theme is encapsulated in one single sentence uttered by Morpheus, “I can only show you the door; you’re the one who has to walk through it.”

I can provide you with mountains of evidence that prove your beliefs about your system of government to be based upon lies, but if you refuse to give those facts any consideration then they may as well be pages torn from comic books for all the good they do you.

The first step to freedom begins by accepting that what you think about things might not be based upon truth; from that point forward everything else revolves around abandoning the lies you have been spoon fed all your life and the seeking out of the truth…but you’ve got to take that first step, I can’t take it for you. I can point you in the right direction, but if you don’t take that first step on your own, then you’ll remain bound to a system who, through its public indoctrination centers you call schools, has shaped your thoughts and ideas to create a society full of obedient little drones who equate patriotism to obeying the law; paying your taxes on time; supporting the government, and voting in every election.

Patriotism, at least in my opinion, is not blind support for any system of government; it is support for the principles upon which that system of government was built. In our case, those principles are that all men are created equal, with certain unalienable rights granted them by their Creator; and that governments are instituted to secure those rights; and that whenever any government no longer serves that purpose it is the right and the DUTY of every person to alter or abolish that system and institute one which will serve that purpose.

When lawmakers, both at the federal and State levels refuse to uphold their oaths of office, and seek to make a tyrannical use of their power, and when they refuse to listen to those they represent, it’s time to get rid of those people, and the system that allows them to make a tyrannical use of their power. If they refuse to relinquish that power then it’s time to start feeding some hogs; and either you’ll get that or you won’t; but here’s a hint… 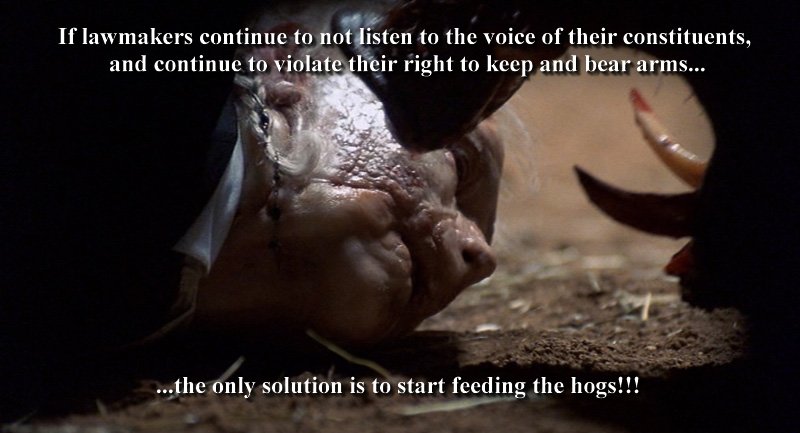