Is Being Subversive Always A Bad Thing? 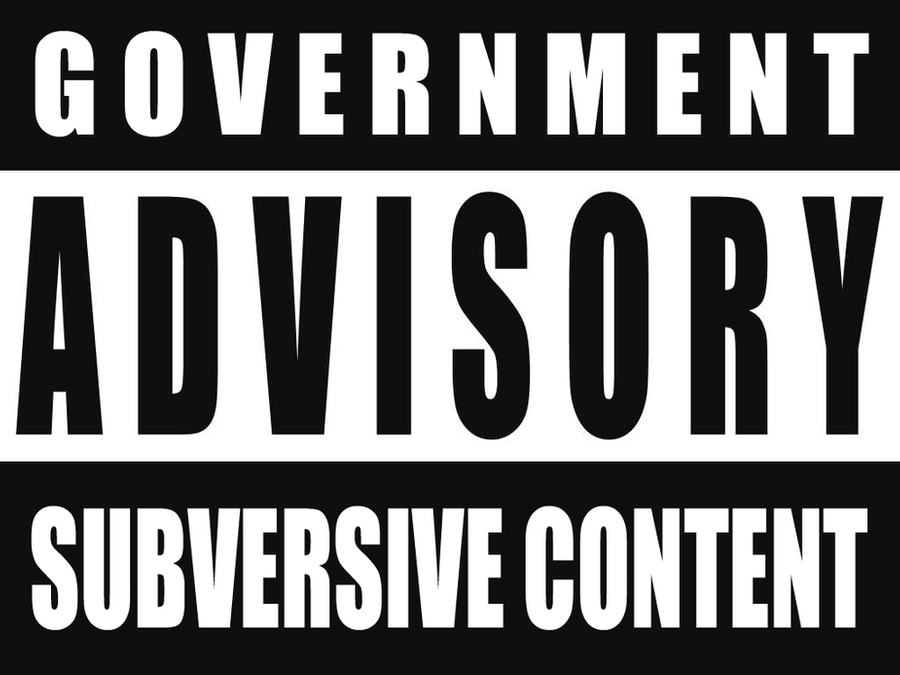 I’ve been called a lot of things over the last 20 some odd years, racist, sexist, extremist, radical, conspiracy theorist, but last night was a first; someone said I was subversive. That’s a serious charge, for according to 18 USC § 2385 it is a crime that carries a penalty of up to 10 years in prison along with a hefty fine. So technically, I could bring charges of slander against the person who said it; or at least defamation of character.

Yes I have said that I believe the only way to restore our liberty is to get rid of government, but I have made it perfectly clear that I AM NOT telling people to take up arms, or use violence against them. I have used examples from our past of how those living in revolutionary America have committed acts of violence against government agents, or employees, but I have not directly told people to go out and do the same; although I sometimes think that they might deserve such treatment.

Subversion and sedition are serious accusations, and the person leveling them needs to be very careful when doing so; for not only can they ruin a person’s life, they can also ruin the life of those making them if the person so accused decides to bring charges of slander against them for making those comments, and if they are unable to back them up in court.

adjective Intending or serving to subvert

I’m no legal expert, but I believe there is a distinction, a fine line if you will, between saying something might be necessary and actively promoting it. Yes, I think our government is evil, it is corrupt, and it generally sucks, and I have said that the only solution is to get rid of it entirely; but that is a far cry from organizing and plotting to do so. So people should be very careful when accusing someone of being subversive, or seditious for that matter; for they often don’t even know the meaning of the words they are using, or the consequences of their accusations.

Now that I’ve said all that, can you tell me any instances from our country’s past when subversives either sought, or were successful in subverting the existing form of government in America? Let me give you a hint, it wasn’t the American Revolution or the Civil War; because subversion, for it to be successful requires that the existing system of government be toppled, or overthrown; and that did not happen in either instance.

The American Colonies did not seek to topple the British government; they only sought to sever the ties which had bound them to its authority and jurisdiction. The same was true when the 11 States of the Confederacy seceded from the Union; they did not seek to undermine or topple the government established by the Constitution; only to sever the ties that had bound them politically to it.

So, if those two events were not examples of subversion, what was? Again, if you are asking that same question, you obviously have not paid any attention to some of my more recent articles; for if you had, the answer would be obvious. The drafting and subsequent ratification of the Constitution was an act of subversion by those behind it. That’s right; James Madison, Alexander Hamilton, George Washington, Ben Franklin, and whole slew of others were subversives.

Those men, the delegates who attended the Philadelphia Convention of 1787, were sent there by their respective States to come up with proposals to strengthen, or improve the government established by the Articles of Confederation, not replace it with an entirely new system of government. In disregarding their delegated authority, they were participating in subversive activities by plotting to undermine or topple the Confederation government and replace it with one of their own creation.

However, all they could do was come up with the framework for their vision of a ‘new’ system of government, they could not implement it; either through violence or sheer will; so they required accomplices – lots of them. These accomplices are found in those who attended the State Ratifying Assemblies; particularly those who supported the adoption of this new plan for a system of government for the United States. It could also be said that those who chose these delegates to the Ratifying Assemblies were accomplices as well, for they often neglected to choose people who did not share the same business/banking/commerce interests as those the Constitution was designed to benefit.

Most of those who attended both the convention that produced the constitution, and the assemblies that ratified it, were directly interested in professions that would benefit from the system of government they were introducing.

Those who wrote the constitution, those who championed its adoption, and those who voted in favor of adopting the system of government outlined by it, were all hoping to establish a system of government that would directly benefit them in their respective business interests; be it the law, banking, finance, or commerce. Few, if any, of those who attended the convention that produced the constitution represented the common man, the yeoman farmers and people just living their day to day lives eking out an existence for themselves and their families. The same can be said about the Ratifying Assemblies; most of those chosen to attend them were from the big hubs of political power within the States, and not from the far extents of the States where the common folk lived.

So the whole We the People line is a load of horseshit if you ask me; it should read: We the bankers, the lawyers, the business owners … do ordain and establish this Constitution…. Of course they had to toss in the words, “… establish Justice, insure domestic Tranquility, provide for the common defence, promote the general Welfare, and secure the Blessings of Liberty to ourselves and our Posterity…” If they hadn’t included those reassuring words, their precious constitution might never have given life to the government of their dreams.

But the fact is that there already was an existing form of government, and those who attended the Convention of 1787 sought to subvert it. They could very well have simply introduced proposals to the States that strengthened the Confederation Congresses ability to regulate trade and levy taxes, but no, they sought to subvert the Confederation Congress and establish an entirely new system.

According to my understanding of the word, that was subversion, it was revolution, it was a bloodless coup d’état. Patrick Henry called it what it was when he said, “Here is a revolution as radical as that which separated us from Great Britain.”

But, just as today people easily fall for measures that ultimately prove disastrous to their rights and liberty, all under the promise of the benefits of comfort, security, or economic growth, the people were swayed into adopting this new system of government; and it has been a steady decline into tyranny and despotism ever since.

One final thought, and a question, and then I’ll wrap this all up. The Declaration of Independence states that those who signed it, and those who fought for the principles contained within it, believed that all men were created equal, with certain unalienable rights, and that governments were instituted among men to secure those rights. It does not say that one class, or category, of men were ‘more’ equal, or entitled to those rights; that all men were. And before you bring up the subject of slavery I suggest you read the part that was edited out of Jefferson’s original draft that denounces slavery and lays the blame for it at the feet of the King of England.

So, if governments are instituted among men to secure our rights to Life, Liberty, and the pursuit of Happiness, and if government does not serve that purpose, is it really a bad thing to want to see that system subverted?

If you ask me, those who make subversion a crime, punishable under law, are more often than not, those who seek to use the power of government to benefit themselves, to subjugate and oppress others, and to maintain their hold on the system that allows them to do so. The terms subversive and seditious are words that are used by those in power to keep prevent people from speaking out about the abuses of power by their government, and to punish them if they do speak out.

Therefore, although subversion may be a crime under the United States Code, it isn’t always a bad thing when the government you would like to see subverted no longer serves the purposes which it was promised it would serve. In fact, although I may be among a diminishing minority in feeling this way, I think being called subversive is a milestone; a badge of honor.

I think that, if Patrick Henry, Samuel Adams, Thomas Jefferson, Luther Martin, John Lansing, Robert Yates, and Samuel Bryan were alive today they would also be saying the same things I’m saying; if not worse; making them subversive as well. So if you choose to call me subversive, at least I’m in good company, unlike those who, in my opinion, are nothing better than a bunch of bootlicking ass kissers who bow down to those who tyrannize and oppress them.