Last night I just happened to pick up my copy of Civil Disobedience, by Henry David Thoreau, and start reading when I came across this, “What is the price-current of an honest man and patriot today? They hesitate, and they regret, and sometimes they petition; but they do nothing in earnest and with effect. They will wait, well disposed, for others to remedy the evil, that they may no longer have it to regret. At most, they give only a cheap vote, and a feeble countenance and God-speed, to the right, as it goes by them. There are nine hundred ninety-nine patrons of virtue to one virtuous man.” When I read that the book fell out of my hands; it felt like I’d been sucker punched; I felt like Thoreau was standing right there pointing a condemning finger at me!

That thought must have crept into the recesses of my mind, for when I awoke this morning there was this burning desire to write about the idea that talk is cheap; actions speak louder than words. Although in today’s modern political climate of political correctness, saying the wrong thing can bring condemnation upon a person, it remains relatively true that talk is cheap; there is no punishment or sacrifice for opening one’s mouth and saying whatever inane thought crosses a person’s mind.

I can’t even count the times people have come up to me and asked something along the lines of, “What can we do to restore our rights or our liberty?” Well the first thing I would suggest is the learning of the proper use of pronouns. What’s this we shit? I think there is a huge misunderstanding in the nature of rights and liberty. Even though people may be well intentioned when asking questions like that, it shows me that they believe rights and liberty to be collective property instead of individual property. My rights are mine and yours are yours, and the moment you begin thinking that you need someone else to help you defend them you have already lost them.

Did Patrick Henry say, “Give us liberty or give us death”? No, he used the proper pronoun…ME. Henry understood that he, as one of God’s creatures, was bestowed with INDIVIDUAL liberty; meaning it was an INDIVIDUAL’S responsibility to defend it. So enough of this we shit already; your rights and liberty are yours, so stop expecting some leader to come along and help you defend them – do it yourself dammit!

I’m tired; I truly am. I’m tired of trying to talk truth and common sense into people whose minds are not capable of understanding. I’m tired of talking to people who think that the answer to our problems is to elect new, better people to a corrupt system that is, in fact, the biggest threat to our liberty and rights. Thoreau was right, men of virtue are few and far between; and so are those who can rightfully claim to be patriots.

Oh, people fly the flag outside their homes, they stand in reverent attention when the National Anthem is played, and dutifully recite the Pledge of Allegiance, but when it comes down to being patriots they say, to hell with that, the government is too big and powerful to resist. You might as well be saying you would tie your hands behind your back and let some 6 foot tall, 275 pound linebacker just punch you repeatedly in the face; after all, he is bigger and stronger than you.

Our rights, our liberty, are ours; each of us individually. It is not society’s job, or responsibility to protect and defend them, it is the duty of each individual to stand up for them all by them self. Your property is yours as well; which includes your rights in case you haven’t been paying attention to the things I’ve been saying for that past decade. It is YOUR responsibility to defend them, and when you place that responsibility upon someone else, (law enforcement), and then let lawmakers enact laws that penalize you for doing so you’ve already lost your right to defend yourself and are a slave.

Anyone who would deny another person the right to have, and utilize, the means of defending them self and their property is a tyrant; even if it is born of ignorance of what individual rights and liberty are.

There is a legal maxim that states: Ignorantia juris non excusat. What that means is, ignorance of the law does not excuse. Just because people are ignorant as to the true nature of their rights and liberty does not excuse them from the guilt of not protecting them; or violating the rights of others.

Thomas Jefferson said that our rights come from our Creator, and if you really cared about going to heaven you might want to start thinking about how you are going to explain to Him why you sat back at let your government steal them from you without lifting a finger to stop it. You don’t have to answer to me, I’m just another pissant on a planet with 7.5 billion other pissants. But you motherfuckers are going to all stand before God and account for your time on this planet, and if your rights are His gift to all mankind, you may want to start treating them with the respect they deserve; instead of supporting the system that is stealing them from you.

They say that there are 4 boxes of liberty; the voting box, the soapbox, the jury box, and the cartridge box. The voting box has proven ineffective, since no matter who gets elected our liberty continually diminishes. The jury box has, for the most part, proven ineffective because jurors are too ignorant, or timid, to defend liberty against a system designed to stifle it. The soap box has also proven ineffective, as nobody seems to listen, or even understand, the words being spoken.

What does that leave us; and they’re working day and night to take that box away from us before we wise up to them and begin using it.

I’m tired of talking to people who claim to be patriots, then, by their very actions, prove that they are not; that they are collectivist slaves to a system that is intent upon obliterating freedom and liberty.

If you say you’re a patriot, prove it; start acting like one – actions speak much louder than words, and I am about done wasting them on people whose actions prove they don’t care the least bit about preserving and defending their rights and liberty.

As Sam Adams said, “If ye love wealth greater than liberty, the tranquility of servitude greater than the animating contest for freedom, go home from us in peace. We seek not your counsel, nor your arms. Crouch down and lick the hand that feeds you; May your chains set lightly upon you, and may posterity forget that ye were our countrymen.”

Believe me, I’ve already forgotten that y’all are my countrymen, and until you start acting like patriots, that ain’t gonna change. 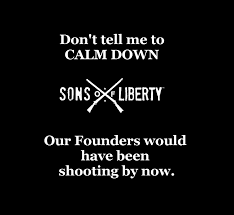