You Dare Call THIS Freedom?

In 1978 I got tickets to see Black Sabbath at the indoor arena in Oakland, California; with the opening act being Van Halen in support of their debut album on their first major tour. By the time I got to the Coliseum parking lot there was already a long line; but that did not concern me; as the show was general admission and I had plenty of experience fighting my way towards the front of the stage to see the bands up close and personal.

When the lights dimmed Eddie Van Halen went into the opening riffs of Running With the Devil and David Lee Roth came running out onto the stage. I was close enough at the time to shoot this picture of D.L. Roth as he made stood at the front of the stage. 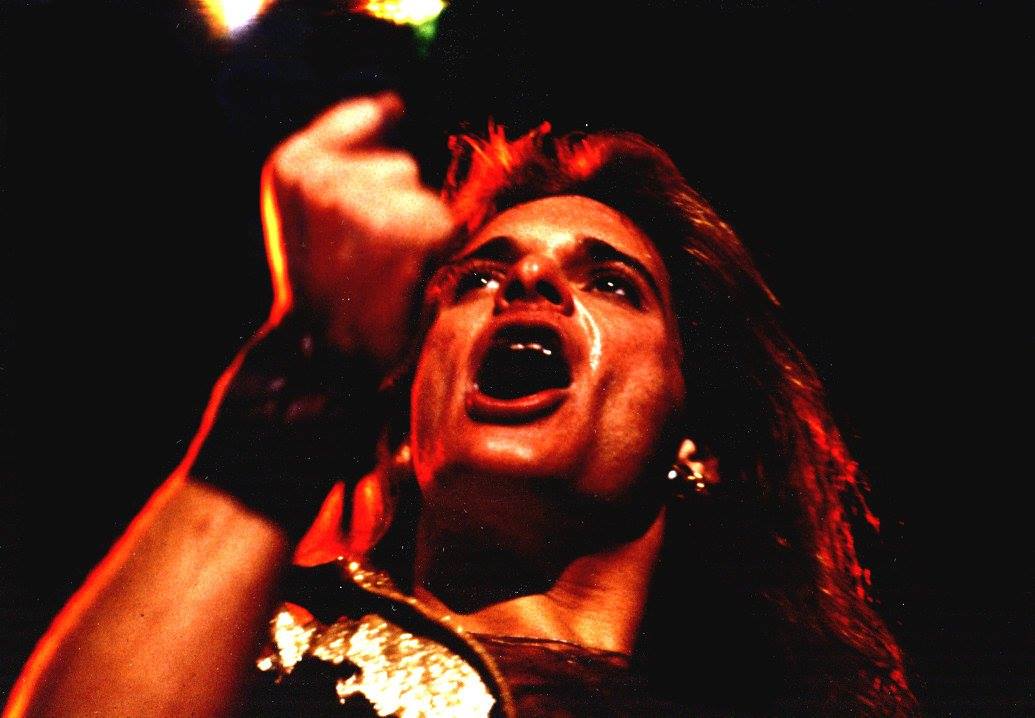 What happened next though was something that had never happened to me at a concert before. As Roth ran from one side of the stage to the other, the crowd shifted with him; tracking his every move. I was literally swept off my feet and transported dozens of feet to the left, then the right. I eventually had to back up, (something else I’d never had to do at a concert), because with the crowd moving around like that it was impossible to focus my camera. (Oh, and for all you youngsters out there, this was before they had autofocus cameras; you actually had to manually adjust the focus on your subject).

I wasn’t scared when that happened; not at 20 years of age. Hell, I felt invincible at that age, and I did things back then that I’d never think about doing today at 62 years of age; (like smoking a gram of hash and downing a 12 pack of beer while driving 150 miles to see a concert). I can definitely say though that it was a strange sensation; not being able to control my own movement; being subject to the mass hysteria of the crowd.

I’ve been recalling that moment in time a lot in the past few weeks – not so much reminiscing the good old days – rather that feeling of not having control over my own life. You see, I’ve been feeling the same way a lot lately; not having any say in what happens to me; being swept up in the mass panic and hysteria of the crowd.

You see, the essence of liberty is being in control of your own life, your own actions, and your own destiny. When a person loses that control they also lose their liberty; and they lose it to whoever now wields it; that person, or group of people, becoming their master.

Like I said, at age 20 that didn’t bother me; especially since all I had to do to regain control of my ability to move freely was back up a few feet. However nowadays I feel like I’m trapped in the midst of a sea of hysterical people from which there is absolutely no escaping.

At that particular concert the crowd was reacting to an outside stimulus; that stimulus being David Lee Roth’s movement across the stage. However, now that I think back on it, it was akin to being trapped inside a herd of stampeding buffalo; the mentality was the same; reacting to certain stimuli in a hysterical frenzy.

Today that stimulus is not a band performing on stage it is the world that surrounds us; particularly the description of the world around us that the news media and our politicians tell us is our reality. They tell us what to think, what to believe, what to fear, then sit back and watch as the public reacts accordingly – typically in panic; calling upon government to ‘do something’ so that they can feel safe again. It would almost be comical if it weren’t for the fact that what government does affects my life and my liberty as well.

Fear is a powerful stimulus, and if a person, or group of people want to control a large group of people, the best way to do it is to keep them in a constant state of fear. I do not know if any of you are familiar with the fundamentals of how a transistor works, but in a transistor a large current can be controlled by a much smaller one.

Transistors have 3 leads on them, the input/output leads, (or emitter and collector), and the base; which is the controlling lead. A transistor is formed by taking silicon, (which typically is not a good conductor of electricity), and adding another material to it in a process known as doping. Depending upon the charge introduced to the base one can either increase the resistance to the current flowing through the transistor, or decrease it, allowing more current to flow through it. Therefore, in a transistor a small amount of current applied to the base lead can control the much larger current flowing through the emitter and collector leads.

If you translate that into how people react to outside stimuli, the people themselves; or more specifically their actions and beliefs are the current flowing through the transistor, while fear is the current applied to the base; the more fear, the bigger the reaction is to it. Those who control the fear therefore control the people – it’s that simple.

Everywhere I look today I see people who live in fear; fear of this, fear of that, and they look to the only entity they have been trained to believe has the answers; the solution to what is causing them this fear – government. People today are more than willing to trade a little freedom here, a little freedom there, for the promise that good ole Uncle Sam will do something to alleviate their fears.

Now if you’ll recall, I had said, “You see, the essence of liberty is being in control of your own life, your own actions, and your own destiny. When a person loses that control they also lose their liberty; and they lose it to whoever now wields it; that person, or group of people, becoming their master.”

Now if you allow fear to rule your life, and if you surrender your freedom to be free of the things that cause you fear, you cannot say that you are free; for you are giving up your freedom to be rid of fear. Now what if, (and this isn’t that big of a stretch of the imagination), government is the one inducing this fear? What if our academics, (school teachers and administrators), and the news media are either working hand in hand with, or controlled by the government; making them instruments by which YOU can be controlled and your emotions, beliefs and attitudes manipulated?

If these entities can convince you that government has the power to calm your fears; that the things government does is in your best interests, then you are less likely to resist things that limit or restrict your freedom. Thomas Jefferson once said something that would most likely induce a state of fear into most people today, “I prefer dangerous freedom to peaceful slavery.”

Liberty is not safe, it is not secure; you and you alone are responsible for providing safety, security, and sustenance for yourself; and that scares the bejeezus out of some people. Some people would rather relinquish all their freedom if someone else would just promise to take care of them; keep them safe and comfortable.

The sad thing about all this is that people have been conditioned to believe that they do have freedom; after all this is the land of the free, right? Let me tell you something, most of y’all wouldn’t know what to do with real freedom if it came to you gift wrapped with detailed instructions on how to use it! Yet you have the unmitigated gall to say that you’re free.

Tell me, are you free when:

-Your government requires that you obtain a permit to build a home;

-You need a license to hunt or fish;

-You have to obtain a permit to carry a gun for your own defense;

-You need a license to start or operate a business;

-You need a license to broadcast over the air waves;

-You are prohibited from putting certain substances in your body, but at the same time the government can mandate that you put other substances into your body that you don’t want to have put into them, (vaccines);

-You can be told that you must stay inside your home, shut down your business, wear a face mask, and maintain social distancing guidelines;

-You cannot say certain things because what you say may be deemed offensive;

-Your privacy is constantly being invaded constantly by Big Brother in the form of an intrusive surveillance apparatus run and monitored by the NSA.

You call that freedom? I call it slavery, and I’ve had enough of it. I will not live my life in fear, and I will not let the pushers of fear become my masters. If you wish to live in slavery feel free to do so, but don’t ask me to join you; and don’t you dare try to force this servitude upon me.

I’m sorry, but if you want to live your entire life in fear, then be my guest; be a pussy that is afraid of life. Not me, I’m gonna live my life as I see fit. If you cannot see that this Covid virus has been used as a weapon against you, not a weaponized virus, but the fear generated by the virus is the weapon being wielded against you, then you deserve the chains that bind you in servitude, and may history forget that you called yourselves freemen and women; for you shame our founders, and you make me sick to my stomach.